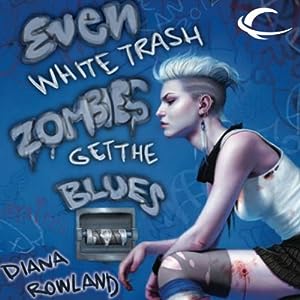 Angel Crawford is finally starting to get used to life as a brain-eating zombie, but her problems are far from over. Her felony record is coming back to haunt her, more zombie hunters are popping up, and she’s beginning to wonder if her hunky cop-boyfriend is involved with the zombie mafia. Yeah, that’s right—the zombie mafia.

Throw in a secret lab and a lot of conspiracy, and Angel’s going to need all of her brainpower—and maybe a brain smoothie as well—in order to get through it without falling apart.

I listened to the first two installments in Diana Rowland’s WHITE TRASH ZOMBIE series back-to-back after having absolutely freaking loved book one only to find myself wishing that I hadn’t. As much as I enjoyed EVEN WHITE TRASH ZOMBIES GET THE BLUES, I couldn’t help but feel a twinge of disappointment after the high I had experienced with the first novel. The zombie 101 elements that were prevalent in the earlier installment were mostly absent and this series’ story arc went from a slow lope to warped speed far too quickly. I still loved listening to Angel’s zombie shenanigans and I’ll definitely be buying the next book although, I am going to wait a bit longer to do that than last time.

The main character and Allison McLemore’s narration are the two main factors that keep me coming back for more. Angel is an incredibly unique and wildly entertaining heroine who I seriously just can’t get enough of. I love her snarky personality and her hilarious zombie vocabulary. It’s impossible not to giggle when she talks about tanking up or when she yells “zombie powers ACTIVATE!” I like how even though Crawford’s a newbie in this world she’s not afraid to throw her weight around, even when she’s up against some pretty heavy hitters. McLemore continues to wow me with her humorous portrayal of Angel and, I know that I’ve said this already but, I could listen to her southern twang all day long.

As much as I enjoyed this book’s plot, I did think that Rowland went a little overboard. Things just got a whole lot more complicated in the WHITE TRASH ZOMBIES universe and I’m not convinced that the author gave readers enough time to catch-up. I understand that she wanted to deliver an action-packed installment but I wish there’d been more of a transition from zombie 101 to full-on mafia war / government conspiracy. Also, most of the new developments in relation to Angel’s walking dead status were instinctual which made them less entertaining to read about because of the lack of the need for trial and error. I’m hoping things will have evened out by the third novel.

I’m still not sure how I feel about the romance between the two main protagonists. There were definitely a couple of cute moments between them and I liked learning how zombie relationships differ from human ones; like for instance, at one point Angel gives Marcus crap for not telling her sooner that she was beginning to smell. And, not like B.O. either but rotten flesh. Yuck. Ivanov had a stick stuck up his butt for a good part of this book but I began to warm-up to him towards the end when he seemed to realize that he had to get off his high horse if he wanted to continue dating Crawford.

EVEN WHITE TRASH ZOMBIES GET THE BLUES is another fun listen from Diana Rowland and Allison McLemore; definitely worth checking out if you like your snark with a side of brains.

18 responses to “Audiobook Review: Even White Trash Zombies Get the Blues by Diana Rowland”