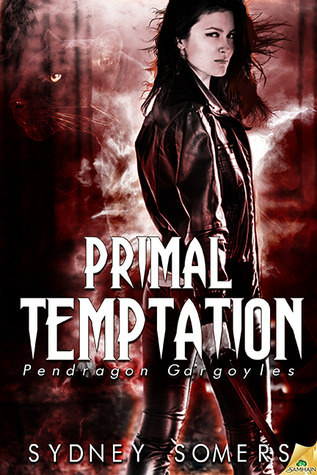 Condemned to darkness…tempted by passion.

Enslaved by a vengeful goddess, forced to live on blood, Lucan can barely remember life as a knight of the Round Table. Yet when one woman’s touch awakens millennium-old feelings that tame the savage darkness within him, he has no choice but to deny their all-consuming passion—for her own protection.

Cat shifter Briana Callaghan has watched all three of her brothers find their mates, but love isn’t in her future. Especially when her mate turns out to be a lethal mercenary…and the only man ever to break her heart.

When she’s chosen to compete in the Gauntlet, an immortal death match, Briana realizes the prize—the sword Excalibur—is her only hope of severing the fierce bond that has the power to destroy her.

Stunned to find themselves pitted against each other, Briana and Lucan quickly find that the only thing they’re fighting harder than their enemies is their sizzling, heartbreaking chemistry. But even if they survive the Gauntlet, claiming the woman he loves will be as impossible as letting her go.

Warning: Contains adult language, skin-tingling sexual tension over a thousand years in the making, and a brutal warrior unable to resist the only woman to appeal to both the man and the monster within.

I haven’t picked-up a Pendagron Gargoyles book since 2011 but managed to fall back into Sydney Somers’ world with ease. Her spin on King Arthur & The Knights of the Round Table is both sexy and fascinating. Briana and Lucan’s thousand-years-in-the-making love story also helped ensure that this novel did not suffer from the insta-love syndrome that so often plagues paranormal romance. Primal Temptation is a well-rounded read packed with fun mythology and lovable characters; a definite must for fans of the genre!

I enjoyed watching the romance between the two main characters develop and I especially liked the flashbacks; Somers creatively weaves them into the plot which adds a lot of fluidity to the story. One of the aspects of mate bonds that I enjoy the most is how oftentimes “the one” isn’t necessarily the person you’d expect. In this case, it’s a matter of a cat shifter falling in love with a wraith. Adding to the list of reasons why they shouldn’t be together is the fact that Briana’s brothers dislike Lucian. Oh, and there’s also the small matter of him having broken her heart all of those years ago. But, as much as the odds are stacked against them, love always finds a way.

The main plot line of this installment is exciting; I liked the gauntlet set-up and enjoyed watching the characters overcome each trial. There are a few hints along the way that the gods may be playing with the immortals and that they might have ulterior motives. A lot of the characters get put through the wringer in this book while new ones are also introduced as possible future love interests. The story ends with a couple of major revelations which guarantee that there are turbulent times ahead for this series (i.e. more installments!).

I’m a sucker for the tall, dark and tormented type so I took an instant liking to Lucan. He can be a real ass at times but it’s mostly a front for his insecurities and protective nature. We learn his true identify in this novel and it’s hell-a shocking! Briana is strong, independent and courageous which just so happen to be some of my favourite traits in a heroine. I loved watching her give it her all in the gauntlet competitions and her refusal to take any crap from Lucan was admirable. A lot of this series’ previous characters also make cameo appearances throughout the book which helps make the story extra special for long-time fans of Sydney Somers.

Primal Temptation is the perfect read for a chilly night with its amped-up sexual tension and heated battles; I just hope that I don’t have to wait another 2 years for the next installment!

Did you find this review helpful? If so, please vote for it on Amazon!