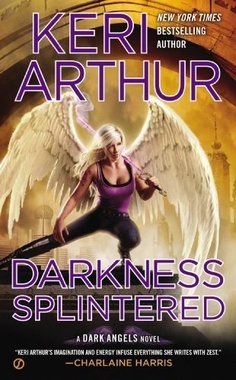 When Risa loses the second key to hell, she angers several powerful people, and she’s starting to feel the pressure from all sides. She gets a visit from her father, who gives her an ultimatum: Get back the key or he will kill her friends.

Risa also finds herself under the scrutiny of the vampire council, some of whom consider her a monster who should be destroyed. But they offer her a bloody bargain: Take on the lethal head of the council, Madeline Hunter, and others will support her.

As the search for the keys to hell heats up, Risa realizes that she has no choice. For the sake of the people she loves, she must find the keys — and get rid of Hunter — before the second gate is opened and brings the world closer to all hell breaking loose...

As a long time Keri Arthur fan it kills me to say this but the further I get in this series, the less I find myself enjoying it. Thank goodness there’s only one book left because I’ve been seriously contemplating calling it quits. The original Dark Angels storyline of “find the keys, save the world” seems to have gotten lost somewhere along the way amidst all of Risa’s relationship woes, problems with the vampire council and friendship complications. The fact that the heroine seems to fall into the same trap time-and-time again doesn’t exactly help matters either. The quality of Arthur’s writing and her knack for delivering non-stop action are undeniable which makes Darkness Splintered a worthwhile read even if the plot is a little too over-the-top for my tastes.

I know this is Urban Fantasy so the romance is supposed to be secondary but Risa and Azriel’s relationship is important to the overall plot line which kind of sends readers mixed messages in my opinion. At the beginning of this book, the two main characters aren’t exactly on the best of terms after what happened in the previous installment. Actually, that’s an understatement, Risa BANISHED Azriel in Darkness Unmasked. Now that’s pretty extreme and yet, after only a few chapters all is magically forgiven and they don’t even really talk it out. Also, there’s practically no sex in this novel, which again is to be expected, but then there’s this one, ridiculously orgasmic scene where they merge energies in order to sneak Azriel into Raziq territory but don’t actually have sex. I just felt like the author often jumped from point A to point C while completely skipping over those all-important middle parts.

*** SPOILER ALERT ***
The plot line is beginning to feel like a bad episode of Maury. Risa is preggo with Azriel’s baby but she banished him after he saved her life by turning her into a dark angel. But thank goodness she was already knocked-up, otherwise her ex Lucian, who also murdered her mother, would have raped her to try to impregnate her like he did with her BFF Ilianna. Then there’s poor Tao who’s still struggling to gain control over the fire element that he consumed in order to save his friends and don’t even get me started on the Madeline Hunter side story! The drama seems to get crazier and crazier with each new installment which has caused the main plot (i.e. finding the keys) to unfortunately, get lost in the shuffle.

Darkness Splintered is an enjoyable read just so long as you take the story with a grain of salt. I’m still holding out hope that the conclusion to this series will make trudging through the last few installments worthwhile. This definitely wasn’t one of my favourite books by Keri Arthur.