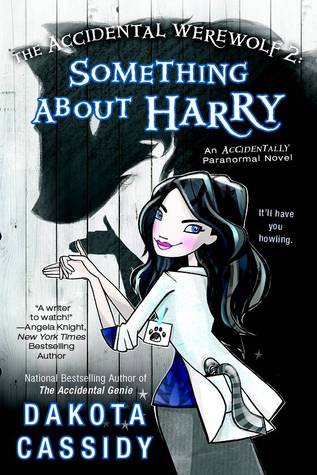 He’s in a furry situation.

Accountant Harry Ralph Emerson has always been a by-the-numbers kind of guy. But when he finds himself trapped at work sprouting an obscene amount of hair, he knows his odds for maintaining normalcy are zero to none. After a frantic internet search, Harry goes through the OOPS—Out in the Open Paranormal Support—checklist and comes to a disheartening conclusion: He’s turning into a werewolf and he needs help ASAP.

Werewolf Mara Flaherty has long carried a torch for Pack Cosmetics’s sexy single accountant, even after her attempt to seduce him went down in flames. When her sister-in-law, Marty, shows up to handle Harry’s OOPS emergency, she tasks Mara with showing the hirsute hottie the ropes. But Mara knows Harry’s condition is a result of her lab experiment gone wrong—and the previously mild-mannered object of her affection is about to give her a piece of his mind.


I can’t believe that it took me so long to discover this series; it’s a shame that it’s already eight installments deep but this is one of those rare occasions where I actually won’t mind playing catch-up. Dakota Cassidy’s writing made such an impression on me that there’s no way I could possibly resist coming back for seconds, and thirds… Something About Harry is a fun read with a great cast of characters that I’m dying to learn more about. The author’s sense of humor is right up my alley; I loved her pop cultural references and the paranormal tidbits were wildly entertaining.

I adored the opening chapters of this book! The scene where Harry’s on the phone with Nina freaking out about turning furry for the first time in his life is priceless. The vampire OOPS counselor on the other end of the line isn’t exactly the most compassionate individual; I took an immediate linking to her abrasive yet snarky personality. And, the more I got to know her, the more I wanted to read her installment in Cassidy’s Accidentally Friends series. That seemed to happen to me a lot while reading this book; as each character was introduced I had a hard time resisting the sudden urge to download their respective story to my eReader.

I enjoyed this novel’s over-the-top corniness; from the author naming a werewolf Harry to the ridiculous way in which he’s apparently turned. I also got a kick out of all the pop culture references, any writer that can work Sam / Dean Winchester, Harry Potter and The Walking Dead into one book SHOULD be on my auto-buy list. But the wackiness doesn’t end there! Meet Carl, the vegetarian zombie with a love for broccoli! Not many authors can pull off such outrageous humor in Paranormal Romance but after only one novel, Dakota Cassidy has proven that she deserves to be on my bookshelf beside some of my long-time favourites like Molly Harper.

The plot line’s entertaining with its who-done-it set-up and is surprisingly complex given the lighthearted tone of this book. Harry, the mild-mannered accountant, actually has a few secret admirers and Mara’s experiment gone wrong turns out to be the least of their problems. I liked the romance between the two main characters; the mutual attraction is obvious but there’s more to a relationship than just great chemistry. That being said, while these two are attempting to work things out that doesn’t stop them from doing the horizontal dance and Harry quickly learns that being a werewolf has some definite advantages.

Something About Harry is hilariously funny with great characters that left me wanting more and even though this is the sixth installment in this series, I never once felt lost. Dakota Cassidy has just made an insta-fan with this book!

Was this review helpful to you? Please consider voting for it on Amazon.

8 responses to “Review: The Accidental Werewolf 2: Something About Harry by Dakota Cassidy”