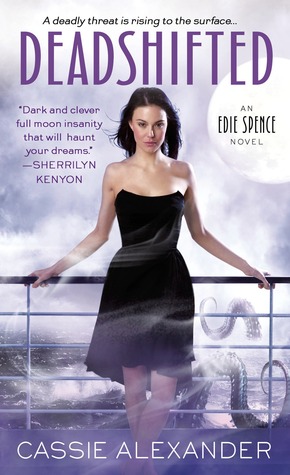 As Nurse Edie Spence embarks on her latest supernatural adventure from Cassie Alexander, the perils of the deep threaten to pull her under…

Edie Spence is in desperate need of a vacation—some R&R away from the craziness that shadows her as a nurse dealing with paranormal patients. But as she and her shapeshifter boyfriend, Asher, set sail on a cruise for Hawaii, they’ll realize that seasickness isn’t the only thing threatening their romantic getaway….

While on board, Asher comes face-to-face with Nathaniel, an old nemesis from his dark past. Asher is convinced he’s up to no good…especially when passengers start to come down with a mysterious illness unlike anything Edie and Asher have ever encountered. Soon Edie finds herself fighting for the life of the one person who means the most to her—Asher. As chaos explodes, will Edie be able to save their future together…or will this close encounter with the paranormal side be her last?

The EDIE SPENCE series has been all over the map for me; it took a while for me to get into the story line but after giving the last installment 5 stars, I thought that Cassie Alexander had finally hit her stride. Unfortunately in DEADSHIFTED’s case it was more of a one step forward and two steps back type of scenario. This book takes place solely on a cruise ship which is almost always bad news in my opinion; having only the one local put a damper on the plot development and caused the action to become monotonous after a while. Edie and Asher’s relationship is also on the fritz in this novel and there’s an obscene amount of deaths on board the Maraschino which made the overall tone of this installment pretty dark and depressing. The whole experience left me feeling rather… blah. I miss the shenanigans and quirky coworkers from Y4.

The unique medical aspect of this series was at the forefront once again in this latest book; from Edie’s obsessive hand washing compulsion to feeling like she’s betraying her entire profession by dating a doctor. Her compassionate nature and dedication to helping others really shines through in DEADSHIFTED even though at times I couldn’t exactly understand it. Her willingness to sacrifice her and her unborn child’s lives to help complete strangers baffled me; she wouldn’t take a little pill because it “might” hurt her baby but she’s willing to give herself up to this story’s big bad to save three Maraschino crew members. I couldn’t help but feel like her priorities were a little off.

Alexander does a fantastic job of describing the death and destruction that takes place on board the cruise ship. Personally, I would have preferred there to have been a lighter side to this installment but I can’t fault the author for her honest rendition of a fatal outbreak. I couldn’t help but be morbidly fascinated by the rows upon rows of dead bodies and by the harsh reality the infected were forced to face.

Edie Spence has the worst taste in men. Seriously! I’m finally over her creepy zombie ex boyfriend but I’m not entirely convinced that Asher is much better. Sure, he doesn’t stink or have pieces falling off but he has hundreds of personalities inside his head and is used to doing pretty much whatever he wants. He also unnecessarily risks himself and his relationship with Edie to satisfy his curiosity. Maybe I’d be a bigger Asher fan if Alexander hadn’t completely skipped over the 6 months after SHAPESHIFTED when they were happy. I’ve never really gotten to see these two lovebirds at their best so it’s hard to say whether they are a good match.

I’m giving you fair warning because this installment ends on a monster of a cliffhanger with implications that could potentially change the entire direction of this series. DEADSHIFTED is a dark, twisted and frustrating read that’ll have you hating yourself for wanting more but, you will want more.