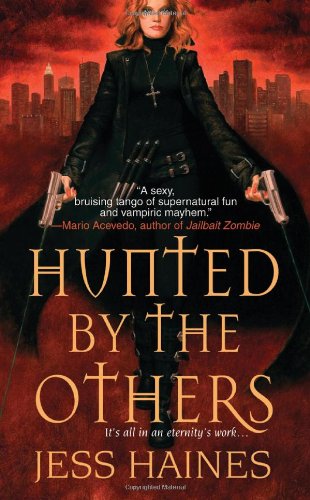 Shiarra has signed on to work for a high-level mage to recover an ancient artifact owned by one of New York's most powerful vampires. As soon as Shiarra meets sexy, mesmerizing vamp Alec Royce, she knows her assignment is even more complicated than she thought. With a clandestine anti-Other group trying to recruit her, and magi being eliminated, Shiarra needs back-up and enlists her ex-boyfriend - a werewolf whose non-furry form is disarmingly appealing - and a nerdy mage with surprising talents.

Hunted by the Others barrels through a New York City up in arms, spells, fangs, and claws against itself.    Yeah, this is a story with factions.    You’ve got the politically incensed White Hats who don’t like any supernaturals.    They’re most vocal about werewolf and vampire but occasionally they’ll say mean things about the mages too.

So the four of them – vamps, weres, hunters, and mages – have guns pointed at each Others’ heads and Shia comes into the middle of that, gradually taking up an alliance now here, now there with little choice in the matter.    Yeah, it’s one of those spinning cycles.    Into whose lap will Shia fall next?

Most of all, I admired the curve balls that were thrown at us at chapter’s end.    Where the book could have fallen into cliche it deftly turns back around, an about-face, of admirable proportions.    The artifacts in this world also scream originality.    And, of course, one has to love that cat scene, which I won’t spoil but say I was immensely pleased to see.

There seems to be an odd political dimension as well.    9/11 is here utilized as a means for the supernatural to expose themselves to the human world.    Those brave men who ran into the World Trade Center to save people?    Yeah, those were weres.    The money bags upgrading governmental security so another terrorist attack doesn’t happen?    Yeah, those were vamps.    It makes me wonder if the Middle East will play a role in future books.

Vampirism and barking at the moon are referred to as diseases spread by a bite.    All biting is controlled by a serious legislative branch.    Really every biter and one who is bitten must sign contracts to establish their relationship.    For all its viciousness this world requires a lot of paperwork.    Will there be an environmental crisis to come when they run out of trees?     How about when the courts are tied up in a webwork of Times New Roman?    These intricacies give this Other world a lot of potential.

3 responses to “Josh Reviews: Hunted by the Others by Jess Haines”