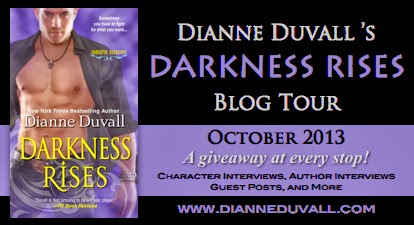 Dianne Duvall is one of our favourite PNR authors here at Rabid Reads and I’m thrilled to be able to welcome her to the blog today for her Darkness Rises tour! A few months back I interviewed Richart d’Alençon so I figured it was only fair that I give his twin brother, Étienne, his turn in the spotlight. Enjoy!


1. How different is 2013 from the late 1700’s when you were born? Is there anything you miss about the good ol’ days?
[box]2013 is VERY different from the 18th century. The world is much smaller today. Travel and communication with other immortals is much easier, dispelling some of the loneliness that goes along with this existence. But it is also far more difficult to hide our existence from the rest of society now. Births and deaths are carefully monitored and tracked. Changing identities to hide our immortality is trickier. And humans’ penchant for snapping pictures with their cell phones and posting them on the internet has forced us to alter the way we hunt vampires.


Are there things I miss from earlier days? Yes. It may sound unbelievable to those accustomed to the comforts of today, but in many ways the eighteenth and nineteenth centuries were far more comfortable times in which to live for Immortal Guardians. ALL of our senses were heightened during our transformation, you see, not just our vision. The world is a noisy place today with its loud music and machinery and can be downright painful to our sensitive ears. And, too, I miss the days of cleaner, fresher air. The pollution humans barely notice is a constant irritant to us with our heightened sense of smell. But, despite the things that have made this century more difficult to live in, despite the danger and difficulties Immortal Guardians have recently faced, 2013 is by far the best year of my long existence because it brought me Krysta.[/box]

2. What’s it like having a twin brother? Are any of your gifts “linked” in some way to Richart?
[box]As an immortal, it’s great, as is having an immortal sister. Immortal siblings are extremely rare. We were fortunate enough to have our own family unit for support and companionship throughout the long decades and centuries before phones and the internet made the world so much smaller. My brother Richart’s ability to teleport enabled us to remain close even when oceans separated us and ordinary modes of travel were slow and tedious. And being telepathic myself came in handy as well. As for gifts we share, while those bestowed upon us by our advanced DNA differ, my brother and I do share a connection of sorts. It’s one I’m told some human twins share, as well. If one of us is injured, the other feels pain. It can be an annoyance, I admit, for two men who spend their nights battling psychotic vampires. But it has aided us at time or two when one was sorely injured and unable to summon help.[/box]

3. I can’t believe you let Krysta continue fighting vamps after you two fell for each other! What was going through your mind when you made that decision?
[box]Her happiness. I knew how much continuing her quest meant to her, knew what ceasing or — to her way of thinking — giving up would cost her, and couldn’t sit back and watch that happen. Though the thought of her continuing to put herself in danger struck a fear in me that I haven’t experienced since I was mortal, her strength, determination, and ferocity in battle were what drew me to her in the first place. I loved her too much to try to dampen that and simply had to hope my being by her side and fighting at her back would be enough to keep her safe. [/box]

4. What’s it like being telephatic? How do you stay sane with everyone’s voice inside your head?
[box]It can be difficult, particularly for younger immortals like me. Elders, like Seth and David, only hear the thoughts of others if they CHOOSE to hear them. My sister and I hear the thoughts of others all the time unless we actively block them. We’ve been doing such for so long now, it’s often habitual, like a human tuning out the drone of the air-conditioner or rumbling of the washing machine. But, once we fall asleep, we lose the ability to shut out others’ thoughts and the dreams of others can become ours. It can be . . . unpleasant.


One of the many things I love about Krysta is that, more often than not, I can’t hear her thoughts unless she wants me to. It’s refreshing, being able to relax my guard and just enjoy her company.[/box]

5. Who’s your favourite Immortal Guardian to work with in the field and why?
[box]My brother Richart. Though we’re considered young and don’t have as much speed and strength as elder immortals, he is nearly impossible to defeat in battle because of his ability to teleport. One can’t strike an opponent who constantly disappears and reappears where one least expects it. And he causes such amusing chaos on the battlefield. I’ve heard more than one enemy liken him to the Grim Reaper culling souls.[/box]

6. Is Chris Reordan really THAT scary? He’s only human and yet, every time an Immortal gets a new girlfriend they seem to live in fear of him finding out. What’s up with that?
[box]Immortal Guardians could not accomplish even a fraction of what we do without the aid of humans. The network Seth has cultivated and grown over the centuries and millennia helps us navigate the information age, shielding our activities AND our existence from the rest of society, handles business we can’t conduct during the day, cleans up our messes, searches for a cure for the virus that infects us so those who wish to be mortal again can one day have that option, and tries to find some way to prevent humans infected with the virus from suffering the brain damage that drives them insane. Immortals greatly appreciate the contributions of these humans, particularly the network heads like Chris Reordon who coordinate it all.


Chris is incredibly loyal and can be . . . ruthless in his determination to protect us. He knows that immortals are dramatically outnumbered in the world, so the loss of even one will have harsh repercussions in terms of holding off the vampire menace. And, over the millennia, too many immortals have been destroyed for no other reason that they trusted where they should not have. Chris wants to prevent such from happening again and will do whatever is necessary to ensure it won’t. When immortals like myself try to prevent Chris from confronting our mortal girlfriends, it isn’t fear that drives us. We have a deep, abiding respect for Chris and the work he does. But, at the same time, we don’t want to see the women we care about threatened or intimidated or upset and would rather not risk maiming Chris in their defense.


I mentioned we’re all fiercely protective of the women we love, didn’t I?[/box]

7. What was your initial impression of Krysta? Was it love at first sight? Did you think she was crazy for fighting vamps on her own or brave?
[box]I was captivated. I have always admired strong women. And Krysta is one of the strongest I’ve ever met. A mortal who has successfully hunted and slain vampires for six years without the aid of immortals or the human network? It seemed impossible. Yet, there she was, luring vampires who were far stronger and faster than her into traps and defeating one after another. The courage it took for her to do that, knowing that each time could mean her death…

8. Why do you give Cam, your second, such a hard time?
[box]Me? Give Cam a hard time? Never. I would suggest the opposite is true. [/box]

9. Big things seem to be on the horizon for the Immortal Guardians; are you afraid of what the future might bring?
[box]I once overheard Seth, while conversing with David, liken our situation to battling the Lernaean Hydra, the mythological beast with all the heads. Cut off one proverbial enemy’s head and two more grow in its place. It seems as though every time we think the threat is over, a new once arises. Even so, I embrace the future. With Krysta by my side and in my heart, I’m confident we can overcome anything.[/box]

Dianne Duvall is the New York Times and USA Today bestselling author of the Immortal Guardians paranormal romance series. Her debut novel, Darkness Dawns, was nominated for the RT Reviewers’ Choice Award for Best Vampire Romance by RT Book Reviews and for Best Paranormal Romance—Vampire by The Romance Reviews. Ensuing books in the series — Night Reigns, Phantom Shadows, and Predatory — have all been deemed Top Picks by RT Book Reviews, The Romance Reviews, and/or Night Owl Reviews. Her latest release, Darkness Rises, has also been chosen as a Night Owl Reviews’ Top Pick.


Dianne loves all things creative. When she isn’t writing, Dianne is active in the independent film industry and once even appeared onscreen as a machete-wielding maniac not unlike the vampires in her novels. 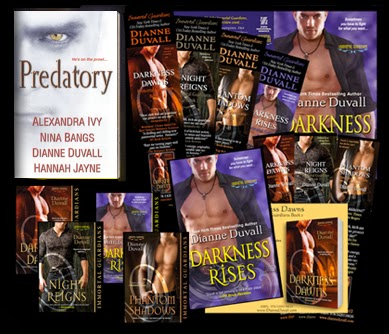 What is one of your all-time favorite quotes, either from a book or a movie? Let me know for a chance to win a signed copy of PREDATORY, my last release, + Immortal Guardians swag. 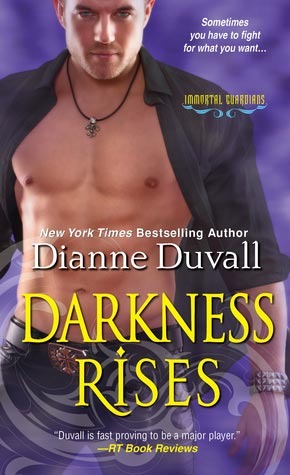 Krysta is used to getting the drop on vampires. Her “special abilities” aren’t much, but the plan is simple—she plays helpless pretty young thing to lure them in. Then her shoto swords come out and it’s bye-bye, bloodsucker. Until one night she finds herself with an unexpected ally. He’s a vampire, all right, but different. Mysterious. Handsome. And more interested in saving her skin than draining it.

Étienne has been an Immortal Guardian for two hundred years—long enough to know that Krysta is special. He can’t stop thinking about her long legs, even more than her short swords. Then he discovers the vamps she’s exterminating have friends in high places, and the Guardians are in danger too. He’ll have to accept Krysta’s help to save them. The stakes for a mortal are high. But the cost to his heart might be higher. . . 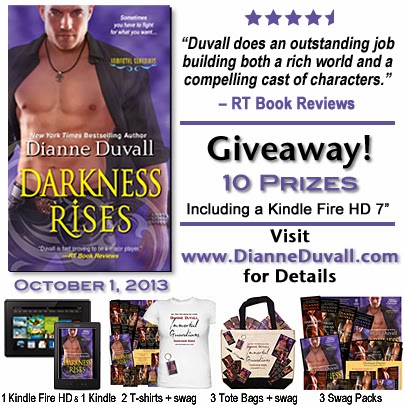