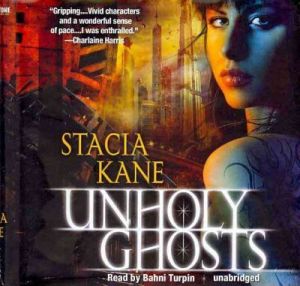 The world is not the way it was. The dead have risen, and the living are under attack.

In a future world under attack from the undead, the powerful Church of Real Truth, in charge since the government fell, has sworn to reimburse citizens being harassed by the deceased. Consequently, there are many false claims of hauntings from those hoping to profit. Enter Chess Putnam, a fully-tattooed witch and freewheeling ghost hunter. She's got a real talent for nailing human liars and banishing the wicked dead. But she's keeping a dark secret from the Church: a little drug problem that's landed her in hot water.

Chess owes a lot of money to a dangerous drug lord who wants immediate payback. All Chess has to do is dispatch a very nasty species of undead from an old airport. But the job involves black magic, human sacrifice, a nefarious demonic creature, and crossing swords with enough wicked energy to wipe out a city of souls. Toss in a dangerous attraction to the drug lord's ruthless enforcer, and Chess begins to wonder if the rush is really worth it. Hell, yeah.

Stepping into Stacia Kane’s Downside world was like walking into an alternate universe where the Church reigns supreme, ghosts have wiped out two thirds of the population and the residents speak a language that’s entirely their own. The magical rules are numerous and complex, the world-building is extremely heavy and the influx of new terminology is beyond confounding. To sum it up in one word I felt lost. Thank goodness for my GoodReads support group because otherwise I don’t think I would have been able to make it through this audiobook in its entirety. Then again, I felt similarly when I first started reading Karen Marie Moning’s Fever novels which now rank among my favourite Urban Fantasy series’ of all time so understandably, I’m going to stick this one out a bit longer. At least until I discover what all of the fuss over Terrible is about!

I really struggled to connect with the main heroine, Chess. Her drug addiction frustrated me to no end; although I can understand the whys behind it, I still had a difficult time comprehending her need to dull her senses, especially given how dangerous Downside really is. You’d think she’d want to have her wits about her in case a murderous ghost decides to cross her path. Chess is a debunker for the Church of Real Truth which means that she’s supposedly one of their most highly trained employees. I found this hard to believe considering she does her job high on most days. A large portion of the mistakes she makes and her delayed light bulb moments during an investigation are caused by her drug use. There were times when I just wanted to yell “if you’d stop doing lines for one freaking minute you might be able figure this sh*t out!” I liked that she’s a flawed heroine but I also would have liked to see her sober for at least one chapter.

The world-building and terminology are definitely going to take some getting used to. I can’t help but wonder if I’m being penalized once again for choosing to listen to this book over reading it because I’m thinking that the physical copy probably comes with a glossary. On the flip side, I think listening to the audiobook does have a few advantages, namely being able to better grasp the Downside lingo. I like that Kane invented her own language for this series; it helps to set it apart from the crowd. I’m not going to comment too much on Bahni Turpin’s narration in this review because I was more focused on grasping the world than on her overall performance so I’ll save my feedback on that for my second kick at the can when I check out Unholy Magic.

After feeling immense pressure from my fellow reviewers to LOVE this book I can’t help but be a little disappointed that I wasn’t immediately swept off my feet by Stacia Kane’s first Downside installment. The plot’s entertaining, the dialogue’s memorable and the world-building left me in awe but the drug addicted protagonist was difficult to swallow (pun intended). Heroine and druggie do not belong in the same sentence in my opinion. Here’s hoping that my second trip into Downside will be better than my first.

*** Thank you to Jennifer a.k.a The Book Nympho for both recommending and gifting this book to me. ***