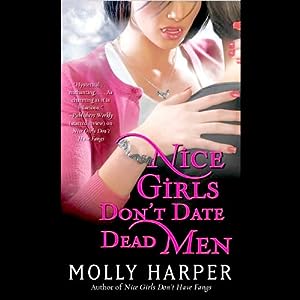 Once a devoted children's librarian, Jane Jameson now works at a rundown occult bookstore. Once a regular gal, she's now a vampire. And instead of a bride, she's an eternal bridesmaid -- which leads her to question where exactly her relationship with her irresistibly sexy sire, Gabriel, is headed. Mercurial, enigmatic, apparently commitment-phobic vampires are nothing if not hard to read. While Jane is trying to master undead dating, she is also donning the ugliest bridesmaid's dress in history at her best friend Zeb's Titanic-themed wedding. Between a freaked-out groom-to-be, his hostile werewolf in-laws, and Zeb's mother, hell-bent on seeing Jane walk the aisle with Zeb, Jane's got the feeling she's just rearranging the proverbial deck chairs.

Meanwhile, Half Moon Hollow's own Black Widow, Jane's Grandma Ruthie, has met her match in her latest fiance. He smells like bad cheese and has a suspicious history of dead spouses. But Jane's biting her tongue. After all, would a nice girl really think she has a future with a vampire?

Worried about turning into bride-zilla? Nothing will make you feel better about your own wedding planning mishaps than reading about Jolene’s upcoming werewolf nuptials. Between her family’s questionable traditions, a future mother-in-law from hell and a theme that’s centered on a sinking ship; there’s no shortage of drama in Nice Girls Don’t Date Dead Men. Molly Harper’s unique sense of humour never fails to bring a smile to my face and even a few laugh-out-low moments but when her story is narrated by Amanda Ronconi the whole experience becomes doubly enjoyable. In this installment we get the best of both worlds: Jane Jameson AND werewolves!

I’m currently in the midst of planning my own big day so I absolutely loved reading about Jolene’s werewolf wedding disasters. She’s a fictional character so I didn’t feel bad about laughing at and even feeling better because of her misfortunes. There are several things that I am dreading about this whole “getting married” process but I was comforted by the knowledge that no matter how bad it gets, it’ll never be this bad. The wedding cake snafu was hilarious and I almost started crying from laughing so hard when the new couple had their first dance to Celine Dion.

One of my favourite characters in this series has to be Dick Cheney; every time he’s in a scene I just know that within no time I’ll be trying to suppress an uncontrollable case of the giggles. We uncover what his secret “vampire” power is and it’s so blatantly obvious yet ridiculously preposterous at the same time. I was as shocked as Jane was to learn the truth but couldn’t resist doing a quick *facepalm* over having missed the clues. Cheney even goes so far as to vamperize Jane’s car; you won’t believe the modifications that Harper dreamed up! This guy should get his own spin-off series. Seriously!

I loved getting to know more about the werewolves in this series; some of their wedding traditions are downright weird but they were definitely good for a laugh. Female wolves don’t consider the B-word to be derogatory and Jane quickly catches on to that fact; it was funny listening to her vent her frustrations over dealing with Jolene’s crazy family by repeatedly using the term. Unfortunately, the bride-to-be quickly caught on to Jameson’s scheme and makes her tone it down. It was great while it lasted though!

The only reason why I haven’t finished this series yet is because I find that the audiobooks are a great way to get me out of a reading slump so I always try to keep at least one in reserve. Molly Harper never ceases to entertain and Nice Girls Don’t Date Men is a great addition to her repertoire. If you haven’t listened to a story narrated by Amanda Ronconi yet, this series is for you.