Welcome, my lovelies! Today, I’m here to give away many, many copies of a fun new release called My Big Fat Demon Slayer Wedding. In it, demon slayer Lizzie Brown is about to have the destination wedding of her dreams…with a few complications. (Isn’t that always the way?) The vengeful Earl of hell is on her tail and it seems one of the guests at the eccentric seaside mansion is possessed and trying to kill her. To top it off, Lizzie has an entire week of pre-wedding festivities ahead of her that include her grandmother’s gang of biker witches; her fiancé’s boisterous griffin clan; and her family from back home, who have no idea Lizzie is a demon slayer or that any magic exists.

Lizzie is going to have to make some interesting choices. And now you can, too.

Below is the My Big Fat Demon Slayer Wedding Q&A Game (based on the book). Answer any or all questions in the comments section and you could win one of five fabulous signed copies. Ready? Let’s go!

If you were Lizzie in My Big Fat Demon Slayer Wedding, how would you:

1) Admit to your mother that, well, you’ve been a demon slayer for the past year.
a) Slip it into conversation between discussions about the band and the cake
b) Show her re-runs of Buffy and hope you can start a conversation that way, “So about slaying…”
c) Deny everything. What she doesn’t know won’t hurt her

2) Sneak off for some alone time with your sexy hot shapeshifting griffin fiancé:
a) Get smexy with him while he’s making breakfast and get caught with your hand down his pants
b) Get naked during a summer thunderstorm and get caught in basically the same position as
before, only with no pants
c) Make love in the fog and get caught in a post-orgasmic haze
d) All of the above (he’s hot, dammit)

3) Incorporate a gang of leather-clad biker witches into the festivities? Have them attend:
a) A tea party
b) A cursed bridal shower
c) Put them to work at a bon-bon favor making party
d) All of the above

Angie Fox is the New York Times bestselling author of several books about vampires, werewolves and things that go bump in the night. She claims that researching her books can be just as much fun as writing them. In the name of fact-finding, Angie has ridden with Harley biker gangs, explored the tunnels underneath Hoover Dam and found an interesting recipe for Mamma Coalpot’s Southern Skunk Surprise (she’s still getting up the courage to try it). 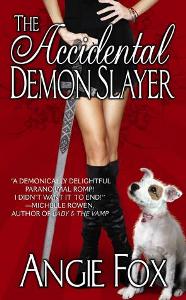 It’s never a good day when an ancient demon shows up on your toilet bowl. For Lizzie Brown that’s just the beginning. Soon her hyperactive terrier starts talking and her long-lost biker witch Grandma is hurling Smuckers jars filled with magic. Just when she thinks she’s seen it all Lizzie learns she’s a demon slayer-and all hell is after her.


Of course that’s not the only thing after her. Dimitri Kallinikos a devastatingly handsome shape-shifting griffin needs Lizzie to slay a demon of his own. But how do you talk a girl you’ve never met into going straight to the underworld? Lie. And if that doesn’t work how dangerous could a little seduction be…? 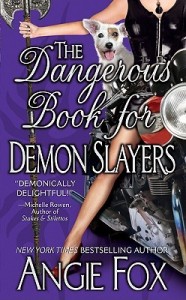 Demon slaying powers should come with an instruction book … Seriously. Why does a new hair dryer have a twelve-page how-to manual but when it comes to ancient demon-fighting hocus-pocus my biker witch granny gives me just half a dozen switch stars and a rah-rah speech? Oh and a talking terrier but that’s another story. It’s not like my job as a preschool teacher prepared me for this kind of thing.


So I’ve decided to write my own manual The Dangerous Book for Demon Slayers because no one tells me anything. Dimitri my “protector” may be one stud of a shape-shifting griffin but he always thinks he can handle everything by himself. Only he’s no match for the soul-stealing succubi taking over Las Vegas. If I can’t figure out how to save him – and Sin City – there’ll be hell to pay. 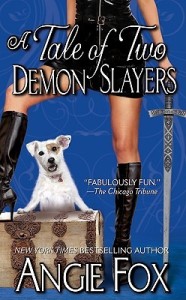 Last month, I was a single preschool teacher whose greatest thrill consisted of color-coding my lesson plans. That was before I learned I was a slayer. Now it’s up to me to face curse-hurling imps, vengeful demons and any other supernatural uglies that crop up. And to top it off, a hunk of a shape-shifting griffin has invited me to Greece to meet his family.


But it’s not all sun sand and ouzo. Someone has created a dark-magic version of me with my powers and my knowledge–and it wants to kill me and everyone I know. Of course this evil twin doesn’t have Grandma’s gang of biker witches a talking Jack Russell terrier or an eccentric necromancer on its side. In the ultimate showdown for survival, may the best demon slayer win. 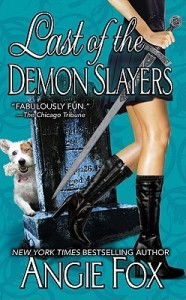 Lizzie Brown would just like to have one normal date. Instead she gets a towering inferno with a message: her long-lost dad is a fallen angel in danger of becoming a demon. Not good. Especially since she’s a demon slayer. Her grandma advises her to stay out of it. Her sexy-as-sin shape-shifter boyfriend would much rather she devote her attention to more carnal pursuits. And her dog’s one demand is for more bacon. After all he can’t train his pet dragon on an empty stomach.


But Lizzie knows there’s no other choice but to hop on her Harley and help her father-even the search for the truth brings a bad-boy slayer back into her life and leads her into the middle of a war to end all wars. 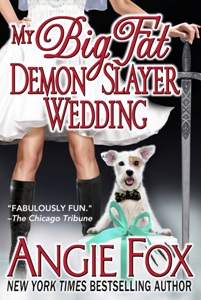 Lizzie Brown is about to have the destination wedding of her dreams. But as this former preschool teacher knows, being a demon slayer makes everything more complicated. The vengeful Earl of Hell is on her tail. And now it seems one of the guests at the eccentric, seaside mansion is possessed and trying to kill her. Maybe she should just elope.


The groom, studly shape-shifting griffin Dimitri Kallinikos, vows to protect her at all costs. Yet even he is acting suspiciously. And minions of the devil are popping up everywhere. As the wedding draws closer, Lizzie has to learn who is behind the attacks— and fast—or risk losing everyone she loves.