Kicking Butt and Having Sex

I was so honored when Carmel invited me to participate in this year’s Stomp vs Romp. Such a fun event, and it’s about two of my favorite parts of romantic adventure! But I have to admit, I was a little surprised to have Heavy Metal included on the Romp side of things, since my “brand” is all about the other kind action.

That surprise only lasted a second, however. First, look at that cover! Can you think of anything but steam when you see Sam’s torso and…is there…anything else on there? Hm… Where was I? Oh, yeah! No surprise, because in the first book in the trilogy, Under the Moon, Quinn Caldwell has an issue with moon lust. When she uses the energy the moon gives her access to, it taxes her body and she needs to “recharge.” With sex.

While the Society for Goddess Education and Defense doesn’t address the issue of sex very much, and as far as Quinn knows she’s the only one who has this lust problem, sex turns out to be a very important element of their world. The powers goddesses have are, at a most basic level, an ability to access and channel energy that regular humans are barely aware exists. And isn’t sex just as energy driven? So it makes sense that it all intertwines.

For Riley Kordek, the heroine of Heavy Metal, it’s simple. Sam is pretty much a walking sex machine. Six foot four, tall, broad, muscled, shaggy haired, with golden brown eyes full of compassion and promise. Even before he saved her life and helped her learn the truth about herself, he pressed all the right buttons.

But Sam can’t take such a direct approach. Sex for him is rarely devoid of emotional entanglement, and now it’s getting all tied up in obligation and fear. Riley’s the first woman he’s begun to fall for since he lost out on love, and the last thing he wants to do is hurt her. The best way to protect her would be to keep her far away.

Until an old enemy and a new one appear to threaten not only Riley, but the entire goddess community.

Natalie J. Damschroder is an award-winning author of contemporary and paranormal romance—Love with a Shot of Adrenaline. She sold her first book in 1999, and 2013 will see the publication of her 14th novel. She grew up in Massachusetts and loves the New England Patriots more than anything. (Except her family. And writing and reading. And popcorn.) When she’s not writing, revising, proofreading, or promoting her work, she does freelance editing and works part time as a chiropractic assistant. She and her husband have two daughters she’s dubbed “the anti-teenagers,” one of whom is also a novelist. (The other one prefers math. Smart kid. Practical.) 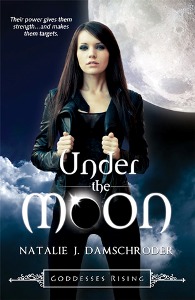 Their power gives them strength…and makes them targets.


Quinn Caldwell is the epitome of a modern goddess. Her power source is the moon, her abilities restricted only by physical resources and lunar phase. She runs a consulting business and her father’s bar, serves on the board of the ancient Society for Goddess Education and Defense, and yearns for Nick Jarrett, professional goddess protector and the soul mate she can never have.


But someone has developed the rare and difficult ability to drain a goddess of her powers, and Quinn is a target. With the world thinking Nick has gone rogue (whatever that means) and that Quinn is influenced by “family ties” she didn’t know she had, keeping themselves safe while working to find the enemy proves harder each day.


But not as hard as denying their hearts… 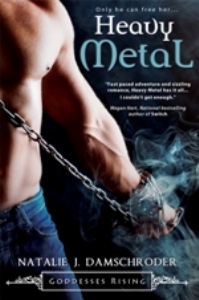 The world is not what Riley Kordek imagined. On the run from those who’ve targeted her, all Riley wants is a chance to figure out her new ability to bend metal’s energy. When a hot guy who knows more than he should helps her escape her attackers, she thinks she might’ve found someone who can lead her to the answers she needs.


Three years ago, Sam Remington walked away from his employer and the woman he loved, and now, all he’s looking to do is fill the gaping hole left behind. Except, when Sam takes Riley to the Society for Goddess Education and Defense, the stakes rise beyond what either of them could have imagined.


After being alone for so long, falling for Sam would be far too easy for Riley—and far too painful, once his old flame calls needing his help. Worse, Riley uncovers a plot with disastrous ramifications not only for herself, but for Sam and the people he loves—and potentially every goddess in the country. 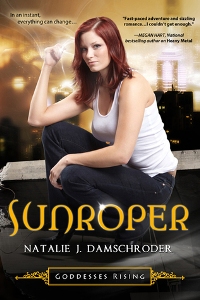 Marley Canton is done being a victim. A year and a half has passed since she discovered her ability to nullify power in those who aren’t supposed to have it. She’s now on a quest not only to stop the brats who’ve become addicted to goddess power, but also to find the source of their addiction.


Like Marley, Gage Samargo is tracking down the goddess who went rogue decades ago. Insane with too much power from the sun, she’s selling that energy to Gage’s younger brother and his friends, who are no longer content to come into power naturally. While they work to find a way to neutralize the goddess, Marley discovers that every time she nullifies someone, she takes on some of the goddess’s insanity.


Gage falls for Marley’s sharp wit and intense desire to right wrongs. But once he discovers she’s turning into her enemy, is it too late to back away?

26 responses to “Kicking Butt and Having Sex by Natalie J. Damschroder”