I’m here to talk about a romp with a werewolf, Adam from Moonlight, to be exact.

Let me start from the beginning… Moonlight started out as a short story. The first chapter was the story, but Adam and Lana had so much chemistry together, that I couldn’t stop thinking about them and wondering what would happen next. I liked Lana and wanted her to finally accept herself and learn what it’s like to be loved and be a part of a family.

And as far as Adam went, I’ll be honest… He was hot, and I wanted to let him get hotter! LOL

My new Moon Series is actually written in alternating first person point of view, so you get to be in both Lana and Adam’s heads. As a writer, this made me a little nervous when it came to the sex scenes, especially the one in Adam’s point of view, but once the book got going, I’m happy to say Adam took over and it wasn’t as tough as I feared. He was crazy passionate and all kinds of sexy, and when I got my first round edit letter for the book, Adam’s hot sexy scenes were not to change! LOL

When the book came out, I held my breath waiting for those first reviews to come in… Yikes! As a writer it’s a scary time because the book is out on its own, like a little bird learning to fly. There’s nothing more I can do to it or for it. I had to hope for the best that Adam and Lana would win the hearts of readers. I’m happy to report that Moonlight didn’t crash and burn… YAY!!! 

Here’s a little sneak peek inside the cover at their first kiss:


[quote]              “You’d think I’d be over all this by now, but the mental image of me being given up to the state in only a diaper and a big sweatshirt is like the ultimate reminder that no one wanted me.”


Adam pulled me into his arms, and I didn’t fight the comfort. Sitting on his knee, I breathed him in while he kissed my hair.


“We’re going to figure out what happened to them.” He pulled back enough to see my face. “I don’t know why you ended up where you did, but it is not because you didn’t deserve a family.”


He bent closer to me, and I tipped my chin up, feeling his breath on my skin. His lips brushed mine so slow and tender that my breath caught in my throat. He rested his forehead against mine.


“You deserve to be loved.”


My heart lurched at his words, and I settled my head against his chest. They were kind words, I reminded myself. That was all. I’d heard kind words before, and they usually came before someone walked out the door.


And the kiss…that kiss. My lips still tingled, wanting more of his attention.


I wiped my eyes, collecting myself. Clearing my throat, I got up and sat on the bed, facing him again. I needed a little distance from him and all the emotions he stirred within me. Keeping the walls secure around my heart was my self-preservation, my only defense.


“So, I guess I better get started tracking down my records to see if they lead me any closer to my parents.” I rubbed my hands on my jeans and glanced over at him.


“You’re going back to the library?” I could see the tension building in his shoulders. “He’ll be watching for you.”


“I know.” I sat up straighter, welcoming the building frustration from his over-protective tendencies. Anything to escape his tenderness. “Believe it or not, I really did survive on my own before we met, Adam.” He shot me a cold look, but I went on. “I found a private investigator I have a connection to in Dallas. I’m going to call him and see if he can recommend anyone in San Antonio who does work inside the Children and Family Services Department over there. I can do it all from here in my room. No library.”


“All right.” He bent down to kiss me again, and without thinking, I kissed him right back. We both stared at each other and my face flushed. Kissing men I hardly knew was miles out of my comfort zone, but with Adam it felt natural. Right.


He started to smile and my heart raced. I was definitely in trouble here. Adam had been kind to me and stood up for me more than once, but this was the same cocky man who sat in my booth at the diner and told me point blank that if he wanted to sweep me off my feet, I’d be swept. Once the chase was over and he had me, he’d be moving on. I knew this lesson well, and it was wise to remember it.


Adam whispered softly as he kissed me again, “I wish I could stay.”


He pulled me to my feet and into his arms as his tongue parted my lips. I moaned into his mouth, ignoring the voice in my head, the one I knew was right, and my fingers tightened in the back of his hair. Our lips brushed over and over, his teeth tugging gently at my lower lip. My body was on fire, aching for
more. When he sat me back down on my feet, I was breathless. I wanted him anyway.


He stared at me with hungry, demanding eyes. “I’m not sorry about that.”


I started to smile. “No one said you should be.”


“Would you like to see the horses tonight? I could barbeque steaks.”


“I’d love to,” I started, “but what about…you know. The whole your-family-hates-jaguars-and-will-be-able-to-smell-me thing?”


“I’ll figure it out,” he growled sending shivers down my spine. His voice was like a dangerous promise. Part of me tried to reach for rational thought. I couldn’t get in too deep with Adam. He’d already explained about his Pack. They’d kill first and ask questions later. But he had done everything he could to keep me safe…


I stared into his eyes, my skin still hot and hungry for more time alone with him, even if it didn’t make sense. “I’d like that,” I whispered before I realized I was going to speak.


His lips curled into a sensual smile. “Me too. Stay inside. I’ll call you later today.”


He reached out to touch my cheek, his fingertips sliding along my skin as he tipped my chin up toward his mouth. This time my lips were already parted, anxious for his affection. When he drew back, my heart pounded.


He slipped out the door, and I engaged the deadbolt. When I stepped back, I shook my head. I was in so much trouble.

Thanks for all the Stomp vs. Romp fun!

Lisa Kessler is an award winning author of dark paranormal fiction. Her debut novel, Night Walker, won a San Diego Book Award for Best Published Fantasy-Sci-fi-Horror as well as the Romance Through the Ages Award for Best Paranormal and Best First Book.


When she’s not writing, Lisa is a professional vocalist, performing with the San Diego Opera as well as other musical theater companies in San Diego. 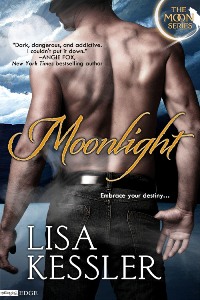 Lana Turpin doesn’t realize she’s a moving target. Raised in the foster system, she only knows that she blacks out during the new moon and wakes up without remembering a thing. But now she’s being tracked by some strange organization that wants her back–even though she’s never stepped foot inside their compound. And the stranger across the diner is watching her like an enemy.