Do’s and Don’ts for Finding a Potential Jaguar Mate

Okay, you’ve been eyeing that hot jaguar shifter and you want to know just how to catch his attention, well here are a few tips from Maya Anderson, heroine of my latest book, Jaguar Fever:


And that’s just a few of the hints Maya can offer. Basically, he has to have a sense of humor, love of family, because mating her means he’s gaining a brother and a sister-in-law, he has to love plants as that’s what she loves to nurture, and take a walk on the wild side. All the other stuff is important too—loving the hot jungle nights, swimming, climbing, running, and even dancing…if she can ever convince Wade Patterson it’s safe for her to return to the jaguar shifter club. See, there was this problem…

Thanks so much for learning what YOU can do to find your very own jaguar mate. Maya says Wade’s taken, claws off. What would you do to entice one of your own?

USA Today bestselling author Terry Spear has written over fifty paranormal romance novels and medieval Highland historical romances. In 2008 Heart of the Wolf was named a Publishers Weekly Best Book of the Year. A retired officer of the U.S. Army Reserves, Terry also creates award-winning teddy bears that have found homes all over the world. She lives in Crawford, Texas.

Heart of the Jaguar Series 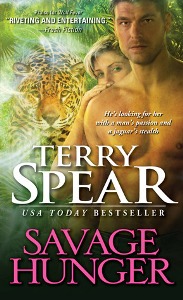 Kathleen McKnight is on a dangerous mission to help her army team take down a drug lord. She’s a tough as nails recruit, but when she’s caught in the crossfire, she has to rely on a mysterious man to save her. She has no idea that he has big plans for her…


Connor Anderson is a jaguar shifter who is looking for his mate. When he rescues Kathleen in the jungle-twice–he can’t help but be intrigued. Will a bite or a scratch turn Kathleen into the perfect jaguar mate? 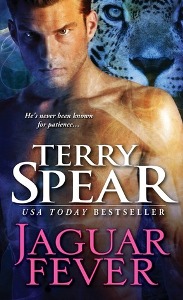 She’s being pursued by everyone, in more ways than one.
Even in an exotic world of humans, jaguars, and tantalizing creatures who shift between the two, Maya Anderson stands out from the crowd. Interest from human suitors is bad enough, but when male shifters give chase, the real trouble starts.


Who’s the hunter and who’s the prey?
Investigating the black marketing trade of exotic animals keeps Wade Patterson more than busy. When he and Maya both get entangled in a steamy jungle mission, it becomes impossible to tell who is being hunted or who the hunters are. Wade is desperate to survive this deadly game of cat and mouse. But it’s Maya’s piercing eyes that keep him awake at night.

Check out Pamela Palmer’s post then vote!
STOMP or ROMP