The steampunk romance world of the Ether Chronicles (including my newest release, SKIES OF GOLD) is dominated by the men known as Man O’ Wars. What’s a Man O’ War, you might ask? Good question! A Man O’ War is, as his name suggests, a man who has been technologically enhanced through implants of a rare metal called telumium.

1. Have lots of stamina. Man O’ Wars are bigger, stronger, and faster than normal men. That means that not only can they fight longer than other men, they can do…other things…with greater endurance. So be sure to drink plenty of fluids, get some rest beforehand, and prepare to have a long, and fun, night!

2. Get used to being on an airship. Because of their implants, Man O’ Wars not only captain airships, but they power them, too. A side effect of that is that they can’t be away from their ships for too long, or else their energy builds up and it can drive them batty. So if you plan on dating a Man O’ War, I hope you like flying around the world having lots of adventures. Oh, and prepare to join the Mile High Club.

3. Give up your diet. Because Man O’ Wars are so powerful, they need a lot of fuel, i.e. food. A Man O’ War eats a lot more than a regular man. Get ready for dinners that last for hours. But don’t worry about calories, because you’ll be burning them off (see Tip 1)!

4. Enjoy the feel of warm metal. The telumium implants are grafted directly onto a Man O’ War’s skin, and look a lot like Roman armor. Plus the metal is heated by their extremely warm skin. If you like the look of a gladiator without all that pesky weaponry to get in the way of ogling their sculpted chests, then you’ll love a Man O’ War. Plus, they keep you very warm at night.

5. Know how to handle yourself in any kind of action. Some Man O’ Wars are military men—in fact, that was their original purpose, to patrol the skies and protect their countries. Some have gone rogue. But no matter what side they serve, action usually finds them. It’s always a good idea to know how to use an ether pistol if you’re dating a Man O’ War. And it’s also a good idea to practice your other moves—ahem—because with their strength and stamina, Man O’ Wars can be very creative in the bedroom.

And there you have it! 5 tips on How to Date a Man O’ War. Remember to take your vitamins!

Zoë Archer is an award-winning romance author who thinks there’s nothing sexier than a man in tall boots and a waistcoat. As a child, she never dreamed about being the rescued princess, but wanted to kick butt right beside the hero. She now applies her master’s degrees in Literature and Fiction to creating butt-kicking heroines and heroes in tall boots. She is the author of the acclaimed BLADES OF THE ROSE series and the paranormal historical romance series, THE HELLRAISERS. She and her husband, fellow romance author Nico Rosso, created the steampunk world of THE ETHER CHRONICLES together. Her new gritty Victorian romance series, NEMESIS, UNLIMITED, launched this Spring. Zoë and Nico live in Los Angeles. photo © Christine Rose Elle.

Leave a comment about why you’d like to date a Man O’ War, and I’ll pick one winner (US and Canada) to win a print copy of the book, plus a deck of steampunk playing cards. 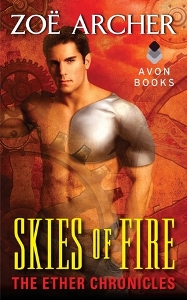 Captain Christopher Redmond has just one weakness: the alluring spy who loved and left him years before . . . when he was still just a man. Now he’s superhuman—a Man O’ War, made as part of the British Navy’s weapons program—and his responsibility is to protect the skies of Europe. If only he could forget Louisa Shaw.


Louisa, a British Naval Intelligence agent, has never left a job undone. But when her assignment is compromised, the one man who can help her complete her mission is also the only man ever to tempt her body and heart. As burning skies loom and passion ignites, Louisa and Christopher must slip behind enemy lines if they are to deliver a devastating strike against their foe . . . and still get out alive. 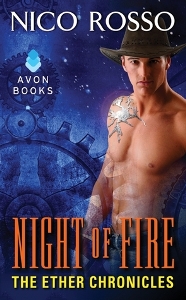 Night of fire, night of passion.


US Army Upland Ranger Tom Knox always knew going home wouldn’t be easy. Three years ago, he skipped town, leaving behind the only woman who ever mattered; now that he’s seen the front lines of war, he’s ready to do what he must to win her back.


Rosa Campos is long past wasting tears on Tom Knox, and now that she’s sheriff of Thornville, she has more than enough to do. Especially when a five-story rock-eating mining machine barrels toward the town she’s sworn to protect. 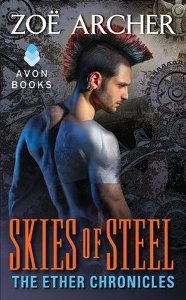 In the world of The Ether Chronicles, the Mechanical War rages on, and appearances are almost always deceiving . . .


Daphne Carlisle may be a scholar, but she’s far more comfort-able out in the field than lost in a stack of books. Still, when her parents are kidnapped by a notorious warlord, she knows she’ll need more than quick thinking if she is to reach them in time. Daphne’s only hope for getting across enemy territory is an airship powered and navigated by Mikhail Denisov, a rogue Man O’ War who is as seductive as he is untrustworthy.


Mikhail will do anything for the right price, and he’s certain he has this mission—and Daphne—figured out: a simple job and a beautiful but sheltered Englishwoman. But as they traverse the skies above the Mediterranean and Arabia, Mikhail learns the fight ahead is anything but simple, and his lovely passenger is not entirely what she seems. The only thing Mikhail is certain of is their shared desire—both unexpected and dangerous. 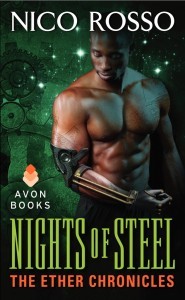 Return to The Ether Chronicles, where the skies above the American West are about to get wilder than ever…


Bounty hunter Anna Blue always finds her fugitive. But her latest mission is filled with mystery: a high price for an eccentric inventor. And her biggest rival, Jack Hawkins—a startlingly handsome, entirely unsettling man whose abilities match her own—is hunting the same bounty. Neither will back down.


When a rogue Man O’ War flies his airship into the California skies, guns blazing, Anna and Jack are forced to team up or die. But it isn’t the danger that has them ready to flare like gunpowder. They’ve circled each other for years as competitors only. Fighters and outsiders, they never thought they’d find a kindred soul. As hot passion and raw need draw them together, can they survive this mission long enough to track the most elusive fugitives…their hearts? 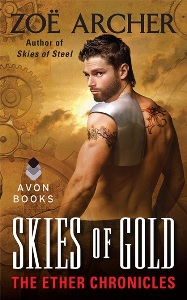 
Kalindi MacNeil survived the devastating enemy airship attack that obliterated Liverpool, but even her engineering skills can’t seem to repair her broken heart. Seeking to put her life back together, Kali retreats to a desolate, deserted island—only to discover she’s not alone. Captain Fletcher Adams, an elite man/machine hybrid, a Man O’ War, crashed his battle-damaged airship into the island after the destruction of Liverpool, never expecting to survive the wreck. But survive he did.


Believing he is nothing but a living weapon, Fletcher is wary of his newfound companion—a pretty, damaged, but determined young woman. Together they are stranded on the island, and it is only a matter of time until desire gets the best of them both. Soon Kali and Fletcher each find that they may be just what the other needed. But a danger from beyond the island puts them to the test. Will it rip them apart or bond their hearts forever?