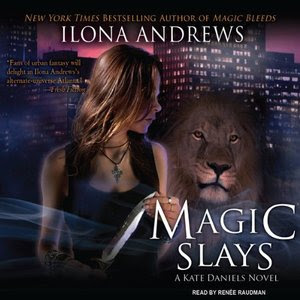 Plagued by a war between magic and technology, Atlanta has never been so deadly. Good thing Kate Daniels is on the job.

Kate Daniels may have quit the Order of Merciful Aid, but she’s still knee-deep in paranormal problems. Or she would be if she could get someone to hire her. Starting her own business has been more challenging than she thought it would be—now that the Order is disparaging her good name, and many potential clients are afraid of getting on the bad side of the Beast Lord, who just happens to be Kate’s mate.

So when Atlanta’s premier Master of the Dead calls to ask for help with a vampire on the loose, Kate leaps at the chance of some paying work. Turns out this is not an isolated incident, and Kate needs to get to the bottom of it—fast, or the city and everyone dear to her might pay the ultimate price.

Please excuse me a moment while I pick my jaw up off the floor so that I can write yet another glowing review for the Kate Daniels series. Magic Slays packs one heck of a punch with so much action, intrigue and comedy that you’ll be strongly tempted to do it all over again when you’re done. I’m not exactly sure which is more addictive, Ilona Andrews’ writing or Renée Raudman’s narration but when these two get together I become putty in their hands. I’m thrilled that I’m finally caught up in this series but also a little sad because I don’t think that the Magic Rises audiobook is scheduled to release on July 30th alongside the paperback and I’m not sure if I can bring myself to read it instead.

Andrews adds even more fuel to Kate’s angry bonfire by dropping a doozy on the poor girl about the darker side of Voron and her mother’s relationship. Talk about kicking a girl when she’s down! Aside from Curran and Julie, the only other good thing Daniels had in her life was the knowledge that her parents had loved her. Fortunately for Kate (or maybe it’s unfortunate, depends on how you look at it), she’s very good at compartmentalizing her emotions. On the flip side, I think that Ilona is a believer in karma because throughout this series good and bad go hand-in-hand. The relationship talk Kate has with Curran injects enough good vibes into Daniels’ life and really goes a long way towards reestablishing some semblance of balance. I could barely hold back my tears while I read the Beast Lord’s heartfelt admission. After this book there’s not a doubt left in my mind as to where Kate and The Pack rank in Curran’s life.

The main plot of this story is the standard life-or-death type deal that I’ve come to expect from Andrews. Kate must once again save Atlanta from itself but this time the culprits are even more unexpected than ever before; conspiracies abound, lines are drawn and friends turn into enemies. The body count in this installment is staggering but as much as I enjoy swordfights, I love the author’s dark sense of humour even more. Some of my favourite scenes include Saiman’s music video of Curran “playing” with his luxury cars, Kate hearing Pack petitions and the witch’s duck-rabbit-cat is just plain adorable! It’s unusual for a book to make me feel such a large range of emotions while reading but Magic Slays is just as bloody as it is funny.

The ending of this novel felt like a kick in the nuts (or so I’ve been told). All I can say is that I’m not sure I’ll be able to resist buying the paperback and reading it while the audiobook takes its sweet time coming out. After listening to the last 5 installments back-to-back I think waiting for the 6th book might just kill me.