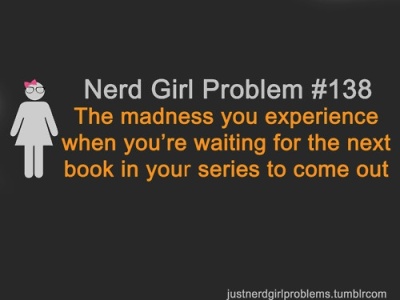 There’s nothing I’d love more than to have my favourite authors publish their installments in 4 month intervals but I understand that this is only a pipe dream. Although, admittedly, as much as a steady influx of series books would rock it would also suck because my TBR pile would be even more unconquerable. It would give me nightmares! I wouldn’t be able to read nearly as many debut authors as I do either, nor would I be able to catch-up on series that have been on my wishlist for ages. And all of those recommendations I receive from fellow reviewers and bloggers? Forget about it! So, I guess as much as I hate to admit it, the current system is probably the best option in order to save both readers and authors’ sanity. But DAMN! …do I ever want that next installment!


Should year-long waits be banned?

16 responses to “Question: Should It Be Illegal To Make Readers Wait One Whole Year For A New Installment?”