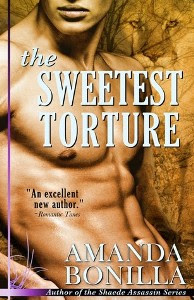 Thirty years ago, when the sultry and headstrong Cait left Logan Paige, the Alpha cougar shapeshifter of his Montana pride, his entire world came crashing down. He couldn’t explain where he’d been the previous night or why there was a strange woman in his bed…because he had no memory of the night before. Wounded and betrayed, Cait refused to listen to Logan’s excuses and walked straight out of his life…determined to exact her revenge on the sexy cougar who had crushed her heart. With a little help from her influential father, she made sure that Logan’s business, as well as his life, crumbled into ruins. Hell hath no fury, indeed.

But now it’s thirty years later and two of Montana’s most powerful cougar prides are on the brink of war. A tenuous peace is reached, but it’s dependent on Cait and Logan marrying on All Hallow’s Eve. Spitfire Cait has her own plans of revenge…using her feminine wiles to turn Logan into a purring kitty lapping cream at her feet. And Logan has his schemes to regain control and dominate like the Alpha he is…

I took an immediate liking to Cait thanks to her fiery debut in Amanda Bonilla’s Sexy Shifter Shorts. Her b*tchiness reaches DEFCON 1 levels in the opening chapters as she finds herself forced into an arranged marriage with her cheating ex boyfriend. All things considered, I can’t say that I blame her for wanting to make life difficult for her future husband-to-be. However, with 30 years of misunderstandings and pent us sexual tension between them, Cait’s anger quickly morphs into lust at the sight of Logan and I knew from that point on that I was in for one heck of a sizzling read. I enjoyed the smooth way in which Bonilla shifts gears from hate to love thanks to her having established a history between the main couple early on; it went a long way into making their insta-connection believable in so few pages which is no easy feat in a novella!

Logan and Cait’s reunion is explosive; I loved their sexy cat vs. mouse games, except in this case it was lion vs. lioness! Both their beasts recognize each other as mates even though their human halves still struggle with this fact which made the chase all the more enticing. Their touch-for-touch foreplay was one of the sexiest seduction scenes that I’ve ever read! But of course, Bonilla didn’t want to give it up that easily, so she throws a bit of action into the mix in the form of a good old fashioned alpha male showdown before the too hot to trot kitties can fully seat the deal. Luckily for these lovebirds, there’s nothing like a good brawl interlude to get their motors running!

The Sweetest Seduction is a playful story that had even this dog lover purring by the end! Thankfully, I don’t have to settle for just one Sexy Shifter Short, Logan’s brother Andrew is up next in The Sweetest Temptation. Andrew Paige wakes up in a motel room with no memory of what happened to him the night before. He has no idea how he got here…or why the state police believe he’s responsible for kidnapping a woman he’s never met!

Erica Ware is bound and determined to find her sister’s kidnapper and bring him to justice. As a wood nymph, she has special powers over men…and a unique way of extracting the truth.

But when the sparks start to fly and her wood nymph nature compels her to seek something other than revenge from the unbearably hot Andrew Paige, Erica can’t help but wonder if she’ll succumb to the sweet temptation of this sexy shifter before she can unravel the mystery of her sister’s disappearance…

I have to hand it to Amanda, she’s super creative when it comes to choosing the supernaturals in her books. Forget about your typical vamps and weres, The Sweetest Temptation features a wood nymph and a cougar! Despite their shaky first meeting, Erica’s abilities go a long way into making an otherwise impossible situation believable which really helped this novella to feel like a full length book in only 58 pages.

Drew and Erica meet under very unusual circumstances which only further added to this tale’s excitement levels. Both characters’ adrenaline is pumping at full speed from the opening pages and it doesn’t let up until one of them is knocked unconscious! I loved the couple’s cute role reversal; him, trying to focus on the task at hand and her, wanting only one thing: sex. Although admittedly, Drew’s level headedness didn’t last long once his beast got a whiff of her desire. Well, that is, until Erica mistakenly calls him a wolf; what bigger insult is there to a cat than being called a dog?

Bonilla holds true to her previous Sexy Shifter Shorts pattern by making us wait (again) for the release that both Drew and Erica are desperately craving. Mr Paige gets knocked unconscious twice in this novella and I couldn’t help thinking about Alice and her rabbit hole. At times it seemed like he was just along for the ride and I thought that he was being a pretty good sport about the whole ordeal. Finally, and after much teasing, Amanda delivers the promised sexy time scene and it’s just as explosive as all of the action that came before it. Definitely worth the wait!

The Sweetest Temptation is exactly what it claims to be; a quickie read that’s going to give you blue balls before it gives you satisfaction. Kidnapped and locked in a dark cave, Kiera Ware has resigned herself to madness. A wood nymph in the grip of a full-moon is guaranteed to lose her mind, literally, without sexual release. And since she’s been held captive and alone for three days, she knows that she could break at any moment…

Carter Hayes has been tracking the rouge shifter who kidnapped an innocent woman for no other reason than to hurt his alpha, Logan. After the loss of his mate nearly a century ago, Carter has stuck to what he knows best – excelling at his job and serving his pride – lonely, but honorable work.

When Carter shows up, Kiera thinks the too-sexy-to-be-true man must be a figment of her imagination…while Carter can’t deny the stirrings of his heart around this strange magical woman.

Running for their lives, Carter and Kiera might just find that sweet mercy they both so desperately need…if they can manage to stay alive!

The final installment in Amanda Bonilla’s Sexy Shifter Shorts trilogy was by far the hottest out of the three and also my favourite. The first two novellas featured strong female leads so, in my opinion, the most logical conclusion to this spicy series is a knight in shining armour HEA ending. Carter’s reputation as a superior tracker and his six pack abs ensure that he’s more than up to that challenge. Unlike its predecessors, The Sweetest Mercy is light on alpha action but heavy of the steam with some of the hottest sex scenes in this trilogy!

I love the alternating POVs in these novellas; it’s fun bouncing between the two main characters and seeing their reactions to each other. The mate bond between Carter and Kiera only helps to further reinforce their deep connection and physical attraction. The chemistry between them is evident from the very first page and talk about a way to start a story! Oh la la! Bonilla was kind enough to not tease her readers for the third time in a row by delivering a quickie before launching into the meat of her story.

A surprising amount of detail goes into this short; for its length, there’s a decent amount of back story and emotional depth. Amanda also works each title into its respective tale which I think is a neat little bonus. I do recommend reading this trilogy in order though, because the stories are interconnected and they really aren’t that long so it’s worth taking the extra time to start from the beginning. Plus, seeing the bad guy get what’s coming to him after a three novella long chase is beyond satisfying!

The Sweetest Mercy is a saucy romantic tale that says a lot with very little words.