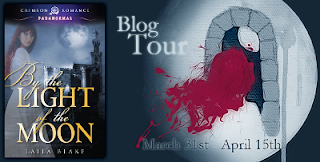 Please join me in welcoming debut author Laila Blake to the blog today! On top of my review, I’m sharing tons of extras about her upcoming release By the Light of the Moon. So sit back, relax and enjoy all of the werewolf goodness! 🙂 Withdrawn and with a reputation for her strange, eccentric ways, young Lady Moira Rochmond is old to be unwed. Rumors say she has been seen barefoot in the orchard, is awake all night in moon-struck rambles, and sleeps all day. Some even claim her ghostly pallor and aloof manner are signs of illness, a curse, or insanity.

The hopes of the peaceful succession to her father’s fief lie in an advantageous marriage. Moira, however, has a hard time attracting suitors. When one does show interest, her family pushes for a decision.

Almost resigned to the fact that she has no choice but to play the part she has been given in life, Moira is faced with Owain, a member of the mysterious Blaidyn creatures and a new guard in her father’s castle, specifically tasked to keep her safe. He is different from other people she knows and when one night under the full moon she makes the acquaintance of the wolf who shares Owain’s soul, she starts to trust him and seek his presence. As he becomes one of the few individuals who doesn’t make her want to hide and retreat, she wants to learn more about him and they grow closer until they share a kiss one night under the moon.

Faced with feelings and desires that overthrow everything she thought she knew about herself, Moira knows non-the-less that they have to be kept utterly secret. However much they try, they continue to be drawn to each other until one night, Owain discovers something about Moira that shakes him to his core.

By the Light of the Moon begins much the same as any other fairy tale; a soon-to-be-wed young woman is tired of doing as she’s told and living her sheltered life so she goes looking for adventure only to find it in the arms of a sexy werewolf. Laila Blake’s writing style flows well and fits the time period of this book nicely. I always enjoy a good forbidden love story! There’s great chemistry between Moira and Owain but I found that their relationship was, at times, overshadowed by the complicated fae plot line.

The first half of this book was difficult to get into because tons of side characters are introduced but we learn very little about their roles or their preternatural sides. From what I was able to piece together there’s a fae mother who’s trying to mend bridges with her estranged fae daughter by using her Halla as a messenger. That daughter is in turn trying to protect her estranged daughter through her other Crossling daughter. Are you confused yet? There’s more but I think you get the idea. I’d expected a nice love story with a trivial plot line featuring werewolves and hopefully a few good sex scenes. What I received was sizably more complicated than that.

Once the love story took over I quickly forgot about the convoluted first half and I only had eyes for Moira and Owain. Reading about old school courtships is one of the main reasons I enjoy Historical Romance novels and Laila Blake takes chivalry to a whole new level in By the Light of the Moon! I loved watching their relationship progress from reserved to passionate and I especially enjoyed Moira’s first encounter with Owain’s wolf. My only complaint is that I wish their electrifying chemistry had landed them in the bedroom on more than one occasion.

The origins of the Blaidyn fascinated me but I wish there’d been a tad more because I sometimes had difficulty understanding Owain’s motivations both as Moira’s guard and as her lover. Lady Rochmond is a sweet girl and I thoughroughly enjoyed her point of view; her noble blood in no way gave her a superiority complex, unlike her suitor Fairester, who’s downright loathsome. Also, I wasn’t a big fan of Blake’s terminology choices with regards to the paranormals in this book. I think she was trying to pick period appropriate names but in doing so she only added another level of complexity to an already weighed down plot.

Overall, By the Light of the Moon is a satisfying read and a good start to a promising new series.

I was born in 1985 into a family of artists, hippies and individualists in Cologne/Germany, and creativity was fostered from an early age. Where my family focussed mainly on visual art (painters, sculptors, my mother was a brilliant puppet player!), I soon started to discover my love for the written word and have been writing and reading ever since.

4 responses to “Review + Giveaway: By the Light of the Moon by Laila Blake”