Amber I. from Awesomesauce Book Club and I have been stalking paranormal authors that will be attending the RT Booklovers Convention in Kansas City on May 1-5. We’ll both be there in all of our book nerd glory so we decided to do a bloggy event to get psyched up even more for the convention!

[box]Hi there! I’m Jeanette Battista and I write YA paranormal/urban fantasy. I’ve published six books and written 3 more (my agent is shopping those around to editors now). I am currently working on a New Adult contemporary to try my hand at an “older” voice. I spend my time writing, reading, and watching horror movies. And dealing with two insane kittens, one of which keeps eating my sweaters.[/box]

[box]My first series is The Moon Series—it’s about werecreatures. I got kind of bored with the traditional werewolves, so I wanted to do something a little different and model the world of the books after the natural one, with top predators and scavengers. So that series has wereleopards, werewolves, werehyenas, and werejackals. Also the odd werebear. The books main focus is Kess—a wereleopard on the run from her family—but later books introduce other characters that interact with her. She’s the starting point. Everything sort of morphs from there. It is complete at four books, but I did leave it open ended should I ever get an idea that fits into that world. I intend to write short stories for The Moon Series as well. So it’s not completely over.[/box]
[box]I co-write a series—Discreet Demolitions–with a friend from graduate school. The first book, Dead Harvest, came out in 2012 although we’ve been writing for over a decade. We’re working on the second book now and are about halfway done. These are new adult books focusing on two female detectives working out of the Underworld. Think Xena meets Buffy with a dash of Monty Python thrown in and you have the flavor of the tone for this series.[/box]

[box]No, this will be my second RT. I went to RT last year and had such a great time. I met so many amazing people that I’m looking forward to meeting more and catching up with old friends.[/box]

[box]I will be on a panel about self-publishing called Sidestepping the Stigma. It will include me, S.R. Johannes, and Dawn Rae Miller. I’ll also be signing at the Giant Book Fair on Saturday and participating in Teen Day. I’m scheduled for an author speed reading session and then I’ll be roving around the Teen Day party that evening. Other than that, I’ll be roving around and attending whichever party promises the best food.[/box]

[box]I love catching up with Melissa Marr—we’ve known each other since grad school—and Molly Harper (who is one of my critique people). I love hearing Sarah Rees Brennan talk about anything—she’s hilarious. As for new authors I haven’t met—I am really looking forward to meeting Leigh Bardugo (Shadow and Bone). I should be sitting near her at the Giant Book Fair (if we go by alphabetical listings).[/box]

[box]My latest book—and the one I’ll be signing at the Giant Book Fair—is Long Black Veil. It’s actually my favorite one that I’ve published to date (Note: not the favorite one I’ve written). I got the idea from the song Long Black Veil and I love ghost stories so I figured I could blend the two and come up with something readable. I’m pretty happy with the way it turned out. I wanted to write a strong female character who is interested in solving a mystery (I read and loved Nancy Drew as a kid), not necessarily interested in dating a cute guy. That just sort of happens as a by-product of all of her research. Here’s what Publishers Weekly has to say about Long Black Veil:[/box]
[quote]Now she walks these hills, in a long black veil/ She visits my grave, when the night winds wail.” So begins the chorus to the country ballad made famous by Johnny Cash that inspired this compelling romance novel/ghost story. But, different from the song’s verses, somebody can see the woman in the black veil: high school senior Devon Mackson. Devon has lived in a trailer in the Appalachian mountains with her grandmother ever since her father died and her mother was arrested for drugs and prostitution. Even though tough-as-nails Gammy loves Devon, all the girl can think of is escaping to college. But when some visits to the Hall of the Records for the purpose of researching her family history ends with a relationship with “town golden boy” Brock Cutler, as well as the discovery of some evidence that brings her lineage into question, her world is turned upside down. The more time Devon spends with Brock, the angrier his ex, a cheerleader, becomes; and the more often the woman in the black veil appears. Devon knows that her relationship with Brock has some parallel to the murder that happened outside of the town hall a hundred years ago, but would she risk her life finding out the truth? While the lovers-from-two-different-worlds storyline is certainly not a new one, the characters are well developed and readers will empathize with their struggle. This novel is solidly executed. The author has taken a well-known story and put it a context that will resonate with teen readers.[/quote]

[box]Finding the really good restaurants and eating myself into a food-induced coma.[/box]

[box]I attend RT for purely selfish reasons: it is my one chance a year to go somewhere by MYSELF. No family, no kids, no one else to entertain or reach a compromise with. I can do whatever I want. And while I do go on writing retreats, I am usually with other authors and I am working. So the idea at RT is just to enjoy myself. While it is still technically work, I get to do fun stuff too and it is all pretty much according to my schedule.[/box]

Jeanette Battista graduated with an English degree with a concentration in medieval literature which explains her possibly unhealthy fixation on edged weapons and cathedral architecture. She spent a summer in England and Scotland studying the historical King Arthur, which did nothing to curb her obsession. To satisfy her adrenaline cravings—since sword fighting is not widely accepted in these modern times—she rode a motorcycle at ridiculously high speeds, got some tattoos, and took kickboxing and boxing classes. She gave up the bike when her daughter came along, although she still gets pummeled at the gym on a regular basis.


When she’s not writing or working, Jeanette spends time with family, hikes, reads, makes decadent brownies, buys killer boots, and plays Pocket Frogs. She wishes there were more hours in the day so she could actually do more of these things. She lives with her daughter and their two psychotic kittens in North Carolina. 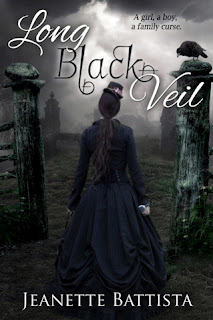 A girl, a boy, and a family curse…

Devon can’t wait to put her podunk mountain town behind her once and for all when she graduates high school. But even though she’s the class valedictorian, the likelihood of her being able to afford college on her own is slim. As she begins the research on scholarships that might help with tuition, a new distraction arises in the form of the town’s golden boy, the cute and popular Brock Cutler who works in the town Records room. Devon knows that mountain and town folk don’t mix, but she’s drawn to him anyway.

But as her friendship with Brock deepens, Devon realizes that there are consequences when mountain folk and town folk mingle: she’s humiliated at a party by the most popular girl in school, almost assaulted by the school quarterback, and rumors about her begin to spread throughout the school. The ghost of a woman wrapped in a black veil starts haunting her steps. As these unpleasant incidents become more frequent, Devon’s grandmother warns her to stay away from Brock so she doesn’t end up like her mother.

As she digs deeper into her family’s past, Devon uncovers secrets that may be better left buried. Why is she suddenly seeing strange visions of a woman in a veil mourning over a hundred year old grave? How is this veiled woman related to the tragic events in Devon’s mother’s life? And why is Devon’s grandmother warning her away from Brock? As Devon searches for answers and the specter’s appearances become more frequent, everything Devon has ever known in her life begins to change.

Can she unravel her family’s curse before it claims her too?

2 responses to “Para-RT13: Interview and Giveaway with Jeanette Battista”