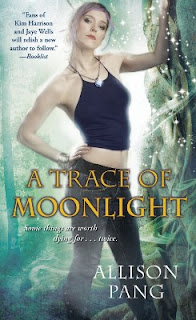 Drinking from the waters of lethe and offering herself up as Faerie’s sacrificial Tithe . . . these just might be the least of Abby Sinclair’s problems.

Abby’s pact with a daemon—whether or not she remembers making it—is binding, so she’d better count herself lucky that (in the words of a daemon who knows better) there’s nearly always a loophole.   But her friends’ reckless attempts to free her, well intentioned though they may be, set off a disastrous chain of events.   In no time at all, Abby turns her incubus lover mortal, then gets herself killed, cursed, and married to an elven prince whose mother wants her dead.   On top of everything else, she’s lost the Key to the CrossRoads to her mortal enemy, who promptly uses his restored power to wreak havoc on the OtherWorld and put its very existence in jeopardy.   Only one person can make things right again, but to find her, Abby must place her trust in allies of mixed loyalties, and conquer her nightmares once and for all.

A Trace of Moonlight maintains an enjoyable air of complication.   With main characters with names like Brystion and Talivar, the initial impression would be these names belong to aliens, which considering the fact that the first eats people’s dreams and the latter sports pointed ears, could not be far from the truth.   The law of Mike, Craig, and Jon rightly deserves to have been broken.   The shortened form of Ion for Brystion does a lot of work to keep me comfortable.

Beyond the names of Abby’s love interests, there stretches a four tier plane of existence encompassing elves, heaven, hell, and humanity.   This show, no different from any of the previous, I came into two acts late, so if my explanation of the logistics falls short, that is to blame.   It is to this plot’s credit that quickly a mantle of clarity settled over my shoulders.   Certain scenes such as camping out in the wild where trolls lead their goats around or elaborate shark-infested dream sequences stick in the memory due to the amount of time they are given for development.   One feels that the author has taken massive shorthand of Abby’s previous adventures as frequently a paragraph of “this event is kind of like this one I had awhile back” appears.

Characters outside of the main trinity of Talivar, Brystion, and Abby, with the exception of the talking unicorn (a little uncouth), the Elven Queen (a little mad), the Elven Princess (a little recessed), and the Bad Guy (a little mysteriously hateful), are not as well developed as one would hope.   With such a large cast, it is to expected that majority of them would serve as tools i.e. this one is the Wild Music carrier, this one acts as an angel, etc.   Perhaps they were better characterized when first introduced but if not it cannot be too much of a shortcoming.

I completely forgot that it has a consistent awareness of how ridiculous it presents itself.   One could call it a sense of humor.  One could call it the bickering of a long joined family.  I’ll say there could have been a bit more.

4 responses to “Josh Reviews: A Trace of Moonlight by Allison Pang”