I am one of the least sentimental, romantic women on the planet. I’m a fighter, not a lover. I’ve cried at exactly two movies in my lifetime. 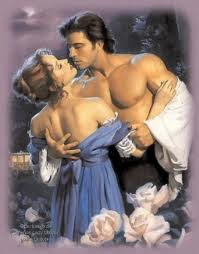 I’d much rather watch Texas Chainsaw Massacre than The Notebook, unless I want to fall asleep from boredom or see how many times I can roll my eyes in the space of two hours. When I read Romeo and Juliet I just wanted to smack the two teens upside their heads for being so stupid. I mean, hello! They were fourteen! But as I write more and more, or maybe because I’m getting older and want to dwell less on misery, I do find myself veering away from horror to romance. Because I do believe in love, and do enjoy writing about it (as long as I get to kill a few things along the way.) So where does this self-proclaimed spinster with no desire to get married anytime soon if ever draw her romantic inspiration from?

Here they are, in no particular order:

1. Titanic: This was one of the aforementioned movies that made me cry to this day (the other being Apollo 13 for some unknown reason.) The first time I saw it when my parents came to pick me up at the theater I was sobbing so hard they thought I’d been assaulted. It took a couple minutes for me to calm down before I could tell them what really happened. That I’d just seen the most touching love story ever. Not only is it a thrilling movie, the love story between Jack and Rose is wonderful. They shouldn’t be together but find one another. They sacrifice for this love, him his life for her. And that last scene, when old Rose is on the boat, dies, then is reunited with Jack on the Titanic with everyone still makes me verklempt. Best epic love story ever.

2. Charlotte Bronte: Not her books, though Jane Eyre is a pretty decent love story especially considering something like it had never been done before. No Bronte’s life is something that no writer could ever have come up with. Cliff’s Notes version. A plain girl, she was born to a poor clergyman. Her mother and two older sisters died, leaving her the eldest girl. She had an isolated childhood with only her remaining three siblings and imagination to keep her company. As she got older she had to go to school to learn to be a teacher and she fell in love with her married teacher. He rebuffed her and she returned to the moors. Then she wrote a book, and it was a sensation. Of course within a year of it coming out all three of her siblings died, leaving her alone with her hard father. Then, out of the blue, her father’s curate tells her he’s been in love with her for years and wants to marry her. Her father goes ballistic, and though she’s in her late 30s tells her to refuse. Curate then falls apart all over town, performing grand romantic gestures. She eventually gives in, and realizes on her honeymoon she’s fallen in love with her husband. They’re not even married a year when she dies of complications from her pregnancy. You can’t make this stuff up.

3. Bet Me by Jennifer Crusie: This is one of my favorite books ever. I laughed, I got misty, I stayed up all night reading it. It’s about two un-perfect people who try to stay away from each other but fate keeps throwing them together. It’s how I wish love could be. Just read it.

4. Ralph Fiennes: Yes, I heart Voldemort. While all the other girls had Johnathan Taylor Thomas or Brad Pitt posters, I had Mr. Fiennes. From age 12 to 20 he was the lead of all my insomnia fueled imagination sessions. He was my romantic hero, and from The English Patient to Strange Days (I still melt in that final scene when he scoops up Angela Bassett, stares into her eyes, and kisses her) he gave me a lot to work with. I even decided to write my first book after seeing one of his movies, Red Dragon (it hasn’t been published yet). He’s still my favorite actor.

5. My grandparents and parents: Once upon a time there was a 19 year old girl living in Nottingham, England who attended an Air Force dance with her mate. There she met a dashing plane mechanic from New Jersey. They danced the night away, had two more dates, then she agreed to move to America with him. They are celebrating their 59th wedding anniversary this year. On the other side of the pond Jim and Ginny were introduced through friends. They married, had two sons, divorced, then ten years later realized they still loved each other and re-married. She took care of him through prosate cancer, heart attacks, then Alzheimers for ten years until he finally succumbed to his many illnesses this year. From those two unions came Mark and Susan. They met on a blind date, dated for two years, then married 30 years ago. They’ve survived ten moves to four states, cancer scares, a sick possibly dying young son, raising four children, and having the snarky me as a daughter. This is real love. It’s all about mutual respect. Loyalty. Compromise. Being equal partners. Theirs are true love stories.

What about you? What is your definition of romance and love? What movies/books/songs make you feel the love?


[author] [author_image timthumb=’on’]http://2.bp.blogspot.com/-5XQYhopdBl4/USpwuY2-VaI/AAAAAAAAHZQ/xHnl2_RW5rI/s320/jen.jpg[/author_image] [author_info]Jennifer Harlow spent her restless childhood fighting with her three brothers and scaring the heck out of herself with horror movies and books. She grew up to earn a degree at the University of Virginia which she put to use as a radio DJ, crisis hotline volunteer, bookseller, lab assistant, wedding coordinator, and government investigator. Currently she calls Northern Virginia home but that restless itch is ever present. In her free time, she continues to scare the beejepers out of herself watching scary movies and opening her credit card bills. With her to-do lists growing longer each day, the last thing Mona McGregor—High Priestess and owner of the Midnight Magic shop in Goodnight, Virginia—needs is a bleeding werewolf at her front door. Between raising her two nieces and leading a large coven of witches, Mona barely has time for anything else. Not even Guy, the handsome doctor who’s taken an interest in her.

But now there’s Adam Blue, the sexy beta werewolf of the Eastern Pack who’s been badly hurt, warning Mona that someone wants her dead. Hell’s bells! A demon is stalking her, and Mona starts to suspect her coven members and even her own family could be responsible for it. With two attractive men and a determined demon after her, Mona teams up with Adam to find out who really wants her dead.