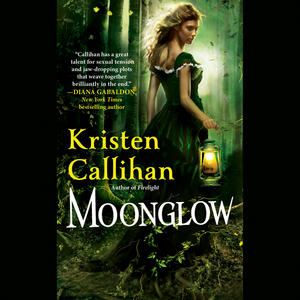 Once the seeds of desire are sown…

Finally free of her suffocating marriage, widow Daisy Ellis Craigmore is ready to embrace the pleasures of life that have long been denied her. Yet her new-found freedom is short lived. A string of unexplained murders has brought danger to Daisy’s door, forcing her to turn to the most unlikely of saviors…

Their growing passion knows no bounds…

Ian Ranulf, the Marquis of Northrup, has spent lifetimes hiding his primal nature from London society. But now a vicious killer threatens to expose his secrets. Ian must step out of the shadows and protect the beautiful, fearless Daisy, who awakens in him desires he thought long dead. As their quest to unmask the villain draws them closer together, Daisy has no choice but to reveal her own startling secret, and Ian must face the undeniable truth: Losing his heart to Daisy may be the only way to save his soul.

Firelight may have knocked my socks off but Moonglow positively swept me away! You don’t just read this book but actually live it thanks to Kristen Callihan’s vivid descriptions, limitless world-building and irresistible characters. Once you enter her Darkest London universe you’ll never want to leave! Moira Quirk’s narration took some getting used to but once I got into the groove I was just as mesmerized by her voice as I was by Callihan’s superb writing.

This book requires your complete intention in order to be able to fully grasp the brilliance of it so don’t start it unless you’re prepared to commit! Darkest London is not just a locale but rather a living, breathing entity; so much so that it felt like a third (albeit welcome) wheel in Ian and Daisy’s adventures. I couldn’t help but marvel at the number of threads that Callihan introduces and then masterfully weaves into this story. Everything has a purpose regardless of how insignificant it may seem and all of them will come into play again before the end.

The werewolf plot line kept me engaged with its politics, history and the intricacies of its subgroups. I also really enjoyed the way in which the author revealed the link between her books; it goes beyond the three sisters and came as quite the surprise! Moira Quirk’s English and brogue accents are well done but difficult to understand at first, especially when paired with the Victorian vocabulary. At times I regretted not having read this book because seeing the words instead of hearing them would have helped. However, once I got over that hurdle it was smooth sailing and I adored her narration.

The ending is unexpected and wonderfully crafted with just the right amount of build-up for the next installment. Moonglow is the perfect book to get lost in!