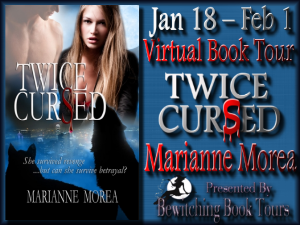 The Story Behind the Story

Like many romance writers, I started reading the genre very young. There were no rating systems in place for books like there are today, and to be quite frank, my parents were just glad I was reading instead of glued to our television. I read mostly mass market paperbacks, including classics like The Wolf and the Dove and The Other Side of Midnight, but I also read Harlequin historical and regency romances. Pretty risqué for a teenager in the late 1970s.

To say I was enamored with the genre is an understatement. I devoured books, especially ones with any kind of paranormal or magical slant. Big surprise, huh? At nineteen, a group of friends got the idea to go to a psychic we had heard about in Greenwich Village. So when I was told that one day I would write romance novels, it raised more than just an eyebrow.
That was the moment my inner author was born.
Years passed, and I was working as a graphic artist on Madison Avenue, and though I kept scribbling in journals, life got in the way of any kind of fiction writing career—that is until my husband surprised me with a laptop one Christmas morning, and I thought, “Why not?”
I had no real experience or any clue as to how the publishing industry worked, so I went online to research. I ordered books on style and read blogs about trends. I searched mainstream author websites and read their success stories. I learned about the war between the self-published and the traditionally published —but throughout, all I wanted to do was submit my work—somewhere, anywhere, just to get the ball rolling. So when I stumbled across Harlequin’s submission guidelines I thought, “Yes! This is it.”
It wasn’t long before I heard about a pitch contest sponsored by one of Harlequin’s ebook imprints— Nocturne Bites. This was the short story division of Harlequin’s Nocturne line. They wanted simple, quick paced, short stories—basically a paranormal wham, bam, thank you ma’am, with a little conflict thrown in just for fun.
So the Cursed by Blood Saga was born, beginning its life as a short story originally titled, Bitter Blood. Although the submission was only 50 pages long, Bitter Blood won the pitch contest with the Senior VP/acquiring editor. Unfortunately, three months later I received a personal letter from her assistant telling me, “thanks, but no thanks.”
Welcome to the world of slush piles and rejections.
Talk about bummed. I was so sure the story was a winner. Now what was I going to do with it? The rejection letter was a true wake up call, but it only took about a week for me to realize I honestly liked my story, and I wasn’t just going to throw it in a drawer somewhere. So what does an aspiring author do?
I was lucky in that Harlequin liked the story enough to give me a particularly encouraging rejection. The letter was very specific about what worked and what didn’t, so I used that as a guideline and decided to add to the story. I re-worked the existing fifty pages I already had and then wrote more, almost tripling the story in length. Hence was born Hunter’s Blood, book one in the Cursed by Blood Saga.
I shopped it around again, this time settling on a smaller publishing house. The book took off and sold roughly 1,000 copies the first year. It may not sound like much, but for an unknown author with a small publisher it’s actually pretty good. But sales waned when my publisher had money problems and trouble paying editors and cover artists—so after two years, two books and a third ready to be released, I decided to form my own publishing company and self-publish my own work. Twice Cursed, book two in the Cursed by Blood Saga and the sequel to my original novella is the first book published by Coventry Press Ltd.
It’s been a long journey, and one whose lessons have been invaluable. All my books are now under Coventry’s umbrella, with six more planned for release in 2013/2014. Self-publishing is a fulltime job, but the benefits and the control you keep over your own work—not to mention keeping the lion share of the money earned from your sales—far outweigh any stigma that still exists. And there’s reason for even more hope, as more and more indy authors succeed. Hey, we’ve even broke the glass ceiling and made it to the New York Times and USA Today best seller’s lists! Who says dreams don’t come true?


[author] [author_image timthumb=’off’]https://lh4.googleusercontent.com/-mnOg9Mw9ZcM/UPMxEFXC6MI/AAAAAAAAGCM/LezS9_u9lyo/s415/Marianne+Morea.png[/author_image] [author_info]Marianne Morea is a New Yorker, born and bred, and for the most part her stories and characters embody the grit and complexity of the city. She’s always been a scribbler, and from the time she could write her name, Marianne has been making up stories. So it was no surprise to family and friends when she earned degrees in both Journalism and Fine Art, but after working in the trenches of Madison Avenue as a Graphic Artist, she decided to do what she loves most fulltime. Write. Hunter’s Blood and Twice Cursed are books one and two in Marianne Morea’s contemporary shifter series, Cursed by Blood. Psychic investigator, Lily Saburi is no stranger to the supernatural. Tough as nails, she’s a hunter in her own right, a once self-proclaimed vigilante that has joined forces with the man she once sought to kill, and now can’t live without. Sexy, Sean Leighton, Alpha of the Brethren of Weres. Their passion surpassed every obstacle set in front of them, yet in the wake of a mysterious virus threatening everyone they love, they are embroiled in an unforgiving scheme of political double dealing, hidden agendas and assassination, with Lily and Sean as primary targets. To stay together, they are forced apart.

But treachery follows hard on Lily’s heels when she returns home to find New York City bathed in a series of bloodbaths. Baffled, the police have no leads, so they call in their last line of defense to work the case. Lily.

Thrown together with homicide detective, Ryan Martinez, dangerous sparks fly as the two uncover the undead truth behind the killings. Long hidden secrets are revealed, as are truths too unbelievable to accept when Lily is kidnapped and Sean and Ryan have to work together to find her.

Revenge and the struggle for power all play a part in this urban fantasy suspense, taking you from the rocky coast of Maine to the heart of New York City, the NYPD and the vampire underground, where Weres and Vampires are forced to work together to solve the mystery of what’s tearing their veiled world apart from the inside out.