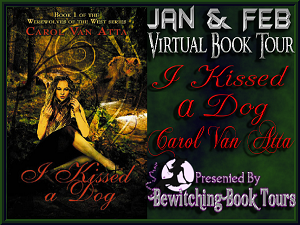 Too often in the books we read the bad guy is, well, a bad guy. Not always, of course, but male antagonists are still the norm. Personally, I believe women make excellent villains. As a woman, I’ve been known to be bitchy, bratty, boisterous, and bossy. In my younger years, I had claws that would sprout if you dared challenge my territory, especially when it came to any male I’d claimed as my own.

Grrrrrr … can anyone say female competition? The Green Eyed Monster was always trolling around looking for trouble, pushing and prodding me (my girlfriends too) into action; and let me tell you, we could behave quite unbecomingly with that evil beast leading the way. I promise you; I’m over all that craziness now. Really! No more claws!

In my new book, I Kissed a Dog, book one in the Werewolves of the West series, you will meet a wolfy woman whose bite just may be worse than her bark. She’s devious, envious, mysterious, and frequently furious, with not only her enemies, but also her supposed partners in crime. When she enters a room, you will know it. The temperature drops as the clicking of her mile-high heels draws your attention to her shapely legs, designer only attire, and perfectly coifed hair. (I like that word ‒ coifed) She holds her head high, the hint of a smirk playing across her perfect features. Well aware that all eyes are trained on her, she basks in the knowledge that men desire her while women detest her. Power. She oozes it. Admired yet hated, she’s prepared to wreak havoc on hearts and homes if doing so takes her one step closer to her prize.

Jazmine, purebred werewolf, has her eyes on several prizes. One happens to be Zane Marshall, Enforcer for the Pacific Werewolf Pack. Problem: His heart belongs to someone else. Uh-oh! We know what that means, don’t we? Trouble with a capital T.

Below is a scene from I Kissed a Dog. Meet the villainous Jazmine. Hide your man and stay out of her way!


A perky waitress, I didn’t recognize, saved me from responding. As expected, she almost drooled at the sight of Zane, who ordered without hesitation, “I’ll take the largest steak on the menu, very rare, and whatever beer you have on tap.”

“Chef Salad,” I piped up, realizing she was still staring at my companion, ignoring my presence. Was I invisible? Considering the number of men who dared sneak a look my direction, I guessed not.

“You sure have your share of admirers,” Zane noted with a hint of annoyance.

“Nothing compared to you. I thought our waitress might slobber or hang her tongue out. I bet she’s still panting.” I watched as she moved to another table, reluctant to turn away.

“Are you jealous?” He asked; his lopsided grin back on display, dimples and all.

Was I? I hadn’t been jealous for a long time.

“Well hello, Zane.” A sultry female voice interrupted our banter. “How unexpected to find you here.” Her eyes traveled over the room with obvious distaste.

“Jazmine,” he growled, not pleased by her intrusion.

“Mind if I join you?” Without hesitating, she glided into the booth beside him, resting a hand on his bicep. Her bright crimson nails shimmered; her malice-filled eyes, dark like Zane’s, gleamed at me.

“Can I get you anything?” The perky waitress returned, looking as aggravated by the new woman’s presence as I was.

“I’ll be just a moment.” A curt wave dismissed the girl. Ms. Perky marched off. I sympathized with the waitress’ wounded pride.

Jazmine was as stunning as she was ice-cold. I didn’t need to see the tags to know she was a Designer Fashion Week regular. Her sheen black hair was cut in a neat geometrical bob that framed her face, drawing attention to her sculpted cheekbones and heart-shaped lips. Her makeup was applied with such obvious expertise that I thought of a model I’d seen on the cover of Vogue.

That model had looked genuinely happy, this woman oozed of cruel intent.

“You’ve been avoiding my calls.” Jazmine sulked, caressing Zane’s arm with her graceful fingers. He shook her off.

You’ll be my mate. Tradition requires it. Her eyes flashed with a myriad of emotions.
My jaw dropped, turning my gaping mouth into a capital O. The woman’s bizarre thought had permeated my mind. Realizing how I must look, I shut my mouth and reached for a slice of bread.

“I told you I’m busy with business. We’ll talk at the scheduled time. And be aware; your behavior is not earning you any points,” Zane snapped.

With one final, scathing glance my direction, she rose fluidly and vanished out the door.

Following her exit, sound returned to the room.

It was then I recognized that following her arrival, everything had somehow revolved around her. She reminded me of a predator stalking its prey. All the other “animals” had remained silent, hoping to avoid the hunter’s detection.

I hadn’t succeeded in avoiding anything.

She was well-aware of my existence, and she already abhorred me. In one meeting I’d become the mysterious woman’s enemy. Between her and Rhonda, I was pretty unpopular.


Stunned by his casual comment, I leaned forward, ready to battle. “You’re kidding, right?” I didn’t wait for an answer. “Some crazy woman, with eyes like a rabid dog, comes in, and from what I could tell, pretty much threatens you. Oh, and I guess you didn’t notice the way she looked at me.”


“Your dinners.” The waitress slid our heaping platters in front of us and hurried away. Smart woman!

[author] [author_image timthumb=’off’]https://lh5.googleusercontent.com/-8Uydsxj-va0/UNdLmVWrV3I/AAAAAAAAFpE/dhE9OVY9ZdQ/s234/Carol+Van+Atta.png[/author_image] [author_info]
Like most authors, Carol Van Atta is no stranger to the written word. She penned a short novel at age 12 (somewhat frightening illustrations included, and lots of bunnies were involved), and had a creative writing piece published in her high school newspaper (about David Bowie’s Diamond Dogs LP). Yes, she’s an ex-80’s chick.

Devouring books from numerous genres, Carol developed a deep thirst/hunger for more reading material, and could almost always be found with her nose in a book.

She has contributed to several popular inspirational anthologies and devotional books, and lives in the rainy wetland of Oregon with a terrifying teen (another in college) and a small zoo of animals. She is taking an undetermined hiatus away from inspirational writing to delve into her darker side. (Though you can check out her latest spiritual suspense novel, Soul Defenders). It is rumored that this genre-jumping occurred after Carol discovered too suspicious red marks on her neck, and experienced an unquenchable urge to howl at the moon. Chloe Carpenter isn’t like other women. She can communicate with animals. A gift she unwrapped following one of her frequent dances with death.

In her otherwise wacky life, she’s finally found a semblance of sanity working at the Plum Beach Wildlife Park, where her unique talents can make life or death differences for the animals in her care. That semblance is shattered when a new veterinarian roars into the park in his spiffed up sports car and sets his golden gaze on her. If she had her way, he’d roar right back out.

Problem: He’s her new coworker and he’s saved her life twice – in the past twenty-four hours.

Zane Marshall, Enforcer for the Pacific Pack of purebred werewolves, has a job to do – figure out who or what is mutilating the young men of Plum Beach.

With orders to find the woman who talks to animals, he accepts a position working alongside the fiery Chloe Carpenter, a female who ignites his interest far more than he ever expected. Remarkably, she’s the one elusive female with potential to bring meaning and passion to his empty existence.

Problem: She despises him.

Together, they’re forced to unravel a mystery of supernatural proportions, a murderous mystery with eternal implications for everyone. In the process, they discover opposites really do attract.

Major Problem: Zane is pledged to another woman, and she’ll do anything to keep him from Chloe.

21 responses to “Tour Stop + Giveaway: I Kissed a Dog by Carol Van Atta”