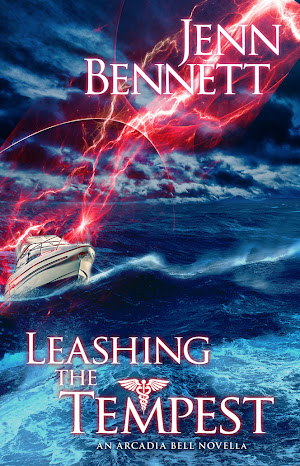 Dating a demon, defeating evil, running a tiki bar: Arcadia Bell is a great occult mage in many respects. But then there’s the challenge of her boyfriend’s precocious teenage son…

Arcadia "Cady" Bell may have saved the Hellfire Club’s children from a local bogeyman, but she and her Earthbound demon boyfriend, Lon Butler, now face a more disturbing problem: his teenage son’s new demonic abilities. Jupe Butler can persuade you to do anything—or so he thinks. To test the limits of his newfound power, Cady invites the co-owner of Tambuku Tiki Lounge to be the teen’s guinea pig during an afternoon boat cruise. But when an angry storm whips the Pacific into a frenzy and Jupe puts them all in serious danger, will Cady's magic trump a teenager’s excess confidence?

For me, this short story was like gravy on top of two, already delicious books; not essential but oh so good. The familial chemistry between Bennett’s characters in this series is undeniable and somehow manages to shine through even in a short novella like Leashing the Tempest.

Cady usually has much bigger fish to fry so it was fun to visit her during her rare downtime and to see her step-parenting skills in action. She’s definitely a good person to have at your back no matter how bizarre the problem is and in this case it’s pretty silly. What first starts off as an innocent little booboo on Jupe’s part quickly turns into a rather hairy situation and leaves the adults scrambling for a solution. I enjoyed the way that they all worked together in a time of crisis because a healthy family unit is rare in fiction so it’s always refreshing when an author shows that not all characters are dysfunctional in their personal lives. I love the humour that Jupe brings to this series; it’s a different variety than what I’m used to because of his age but his perspective on “grown-up” problems is one of the reasons why I love these books so much.

Leashing the Tempest is a fun little extra tacked on to an already fabulous series and just the thing I needed to tide me over until May 2013 when Binding the Shadows hits shelves.

3 responses to “Review: Leashing the Tempest by Jenn Bennett”