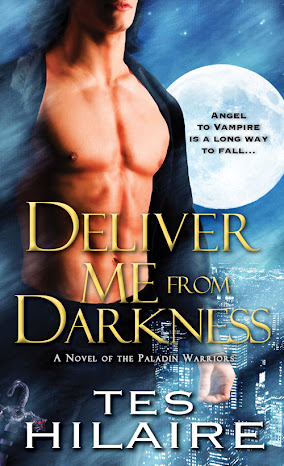 A STRANGER IN THE NIGHT...

He had once been a warrior of the Light, one of the revered Paladin. A protector. But now he lives in darkness, and the shadows are his sanctuary. Every day is a struggle to overcome the bloodlust. Especially the day Karissa shows up at his doorstep.

COMES KNOCKING ON THE DOOR

She is light and bright and everything beautiful—despite her scratches and torn clothes. Every creature of the night is after her. So is every male Paladin. Because Karissa is the last female of their kind. But she is his. He may not have a soul, but he can't deny his heart.

The structure of this book follows the vamp-para-romance model to a T which means that overall it was rather predictable and unremarkable. I wasn’t wowed by this novel but I wasn’t disappointed either; it was what I expected it to be. Even I need my white knight / happily ever after fix every now and then, and Deliver Me from Darkness‘s got one.

The Paladin mythology was interesting but Hilaire didn’t expand upon it enough for my liking. I found that the story was too focused on the romantic aspects and not enough attention was given to world-building. The bits and pieces that we do learn don’t fit together overly well which left some pretty big holes in the Paladin Warriors’ lore and made the concept hard to grasp. Another thing that threw me off about this book was the pacing; the beginning was slower than I prefer which made it difficult to really get into the story but thankfully, it does pick-up eventually.

I didn’t particularly care for the leading couple in this story; I wasn’t invested in their well-being and I found them to be a tad bit underdeveloped for my tastes. I had a hard time caring about Karissa’s troubles because of her attitude problems and Roland’s struggles didn’t gain much sympathy from me either because of his cynical outlook. Both characters came across as very self-involved which rubbed me the wrong way and made the “I’ll die for my mate” story line difficult to digest.

Surprisingly, it was the secondary characters that I found were the most enjoyable. Logan doesn’t see the world in black & white which made him quite intriguing considering that he’s a Paladin. He’s not afraid to go against his brothers’ and to do what’s right instead of what’s “good” which can be a difficult distinction to make when you’re an angel. Valin, on the other hand, his a whole other story. I’m not exactly sure what side he’s on and it’s this mystery that makes him so appealing. I hope that he eventually gets his own installment in this series because he’s one character that I definitely wouldn’t mind learning more about.

I’m undecided as to whether or not I should continue reading this series; Deliver Me from Darkness in itself wasn’t anything special but the side characters and lore lead me to believe that future books might be worth checking out. Hopefully Deliver Me from Temptation will help me to make up my mind!