SANTA, BABY
A short-short from the world of the Sentinels of New Orleans

I checked the figures my partner Alex and his cousin Jake had painstakingly etched into the wooden floor of my library. Three perfect circles, one inside the other. I could load all three with magical energy and create a summoning space so strong even the most murderous preternatural couldn’t break out and try to kill me.

Killing DJ seemed to be a common prete goal lately.

“Let’s try it.” Jake sat on my worktable, legs dangling off the sides, while Alex put the tools away. “Summon Louis Armstrong. I’d like to see him again.”

I shook my head. “He’s still kinda freaked out after that whole turning-him-into-a-spy thing.” Never mind that he’d been the worst spy in the history of the world. But he wasn’t the only member of the historical undead among my list of acquaintances. “I could summon Jean Lafitte.”

Alex set the toolbox down in the corner with an exaggerated thud and assumed his best French pirate voice, which sounded more like the skunk Pepe le Pew. “There is no need to summon me, Jolie. I am two miles away in my expensive French Quarter hotel suite.”

Yeah, yeah, whatever. He was right; I could only summon someone from the Beyond, not from the French Quarter. “Forget the pirate, then. The Beyond is teeming with the Historical Undead. What about William Faulkner or Truman Capote?”

Alex shook his head. “They’re still pissed off that we turned them into cats that time. Especially Faulkner. He wanted to be a Siamese instead of a tabby.”

Alex and I stared as if Jake had grown an extra set of ears. “I can’t summon Santa Claus.”

“Why not?” Jake hopped off the table and pulled my dogeared copy of Beyond Human: Species of the Beyond from the shelf of spellbooks and grimoires. “I was lookin’ at this the other day and Santa has his own chapter.”

I snatched it away from him and stared at the chapter heading: Father Christmas, Saint Nick, Santa Claus, and Other Holiday Faeries.

“Holy crap, I didn’t know Santa was fae.” Which probably meant Santa’s elves weren’t elves at all, but some type of faeries instead. Good thing. I hate freaking elves.

I didn’t know enough about faeries to hate them. I’d heard they could be difficult, tricky, and a tad vindictive. But this was Santa, after all. Santa loves kids and nasally challenged reindeer. Santa loves everybody.

Santa would never try to kill me.

“Jake, go to the downstairs closet and pull a red bow out of that box of wrapping paper.” I studied the circle. “Alex, dig in that drawer with all the candles and pull out a red one that looks festive.”

I filled in the etched outer circle with iron filings—the strongest containment medium at my disposal. I might be impulsive but I’m not stupid, and a circle of cold iron would contain even the most malevolent faery. At the northernmost point of the circle, I placed the book open to the Santa entry, and at the south I set a small holiday bell made of ruby glass. Once the guys brought the bow and the candle, I place those items at points east and west.

Alex crossed his arms and narrowed chocolate brown eyes at me. “You sure about this? Do I need my shotgun?”

Cancel that order to the testosterone factory. “Give me a break, guys. This is Santa. Why would you need a knife or a gun?”

Alex shrugged and took Jake’s seat on the worktable. Jake leaned against the nearest bookcase with his arms crossed. “Go to it, then, sunshine. Do your thing.”

I tugged my own small silver folding knife from my jeans pocket and made a small slice into my thumb. Grabbing the elven staff I’d named Charlie, I squeezed a dollop of blood onto the circle near the bell, and said the words to summon Santa Claus.

A swirl of mist materialized inside the containment circle, gradually dissipating to reveal…a guy. A tall, heavyset guy. Dark-haired and clean-shaven, with oversized sideburns. A guy wearing a red suit. Not a Santa suit, either. More of an….Elvis suit, from his Vegas cape period. Frilly white ruffles circled his wrists and stretched down the front of the suit jacket.

“Who the hell are you?” Alex slid off the worktable and walked closer to the circle, coming to a halt in front of Vegas Santa. My partner’s fingers twitched as if wishing for a trigger to pull.

“Ho-ho-freaking-ho.” Santa flicked a glance at Alex, then shifted his gaze to Jake and finally rested it on me. His eyes were a disturbing shade of pale, icy green. “What do you want, wizard? I was almost through with my gig letting drunk gamblers sit on my lap at the MGM Beyond-Grand. I have to finish in time for Liberace’s set. He gets overwrought if he has to start late.”

Jake and Alex turned wide eyes to me. Guess Liberace was one of the historical undead now, and playing in some prete version of Vegas. “We, um, had a few Christmas requests for Santa. We were expecting someone a little…fluffier.” And saner.

“There are hundreds of Santas, and I was closest; deal with it.” He waved his hands in circles, giving me the universal symbol for go ahead and spit it out. “You have thirty seconds to tell me what you fools want for Christmas. Otherwise, I’m out of here. The Cirque du Beyond show starts at midnight.”

Who did this overgrown pomegranate think he was? I was the wizard here. “You can’t leave until I release you from my circle.”

Santa stopped fidgeting with his frilly cuffs and stared at me. The longer he looked, the more I saw things in those eyes. Dark things. Moving things.

“Last chance, Drusilla Jaco,” he said, and even the tone of his voice changed to something deeper, richer, with an edge that made me swallow hard. “What. Do. You. Want?”

Yeah, okay, so I’m a chicken. But at least I’ll live to cluck another day without falling victim to an insane faery Santa in a bad suit.

“Right answer.” His grin was dazzling as he disappeared in a puff of mist.

I reached out a shaky hand to break the plane of the circle.

“He left something behind,” Alex said, and leaned over to pick up a black lump. “I think it’s supposed to be a lump of coal.”

Cheap faery. “Looks like a charcoal briquette to me.”

Jake held a hand out for the charcoal. “C’mon, let’s go down to the Gator. We’ll grill a steak in the courtyard and watch the Saints get the crap beat out of them.” Now that sounded like Christmas. 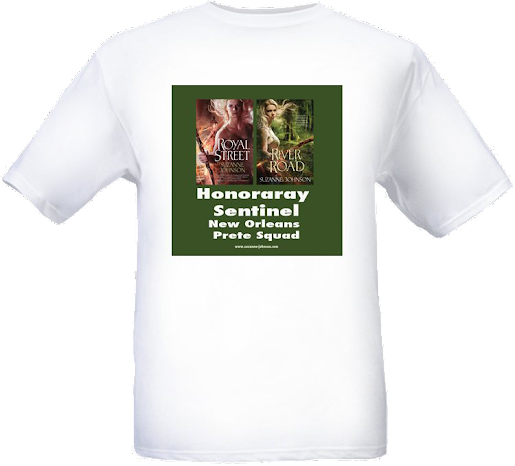