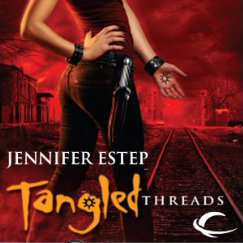 I’d rather face a dozen lethal assassins any night than deal with something as tricky, convoluted, and fragile as my feelings.

But here I am. Gin Blanco, the semi-retired assassin known as the Spider. Hovering outside sexy businessman Owen Grayson’s front door like a nervous teenage girl. One thing I like about Owen: he doesn’t shy away from my past—or my present. And right now I have a bull’s-eye on my forehead. Cold-blooded Fire elemental Mab Monroe has hired one of the smartest assassins in the business to trap me. Elektra LaFleur is skilled and efficient, with deadly electrical elemental magic as potent as my own Ice and Stone powers. Which means there’s a fifty-fifty chance one of us won’t survive this battle. I intend to kill LaFleur—or die trying—because Mab wants the assassin to take out my baby sister, Detective Bria Coolidge, too. The only problem is, Bria has no idea I’m her long-lost sibling . . . or that I’m the murderer she’s been chasing through Ashland for weeks. And what Bria doesn’t know just might get us both dead. . . .

I’ve been barreling through this series like a woman on a mission. I know that I say this in every review that I write for Jennifer Estep’s books but it really is worth repeating: these books are the bomb! The writing is out-of-this-world outstanding, Lauren Fortgang’s narration is mesmerizing and the characters… Oh. My. God! I ♥ Gin, Owen, Finn, Sophia & Jo-Jo! In this installment we have the showdown to end all showdowns; I’m talking assassin vs. assassin. I mean no disrespect to the athletes I’m about to reference but the fight sequence between Gin and LaFleur puts MMA fighters to shame! In Tangled Threads emotions run sky high, the trademark action is kicked-up an extra notch and the secret that comes out about Flether Lane is just… wow. This book is a masterpiece, plain and simple!

I’m going to try my hardest to avoid spoilers but when you’re reviewing the fourth book in a series it becomes incredibly challenging so please excuse me if I goof. The build-up to the inevitable fight-to-the-death between Gin and LaFleur is incredible. If you’re not a nail bitter, you will be by the end of this novel. McAllister enlists Elektra to kill Blanco without realizing that she’s the Spider. As a result, the hired gun repeatedly pops in to case her mark which left me in a perpetual state of “is this it? The. Fight?” Of course not! You still have 150 pages left to read you silly girl (Yes, I talk to myself when I read)! Although, you never know with Estep; she’s good at keeping her readers guessing.  To say that the plot of this novel is suspenseful would be an understatement.

Owen Grayson is the perfect match for Gin, he really is. His elemental power complements her own, he pushes her to succeed even though doing so means upping her body count and he’s just so darned thoughtful. I was thrilled to see Blanco finally take the plunge and embrace her feelings for him. She deserves to be happy and shouldn’t let a douchebag like Donovan stand in her way. Also (not that I’m taking notes or anything *wink-wink*) the sex between Owen and Gin is WAY hotter because it’s not just about physical attraction. I’m just a little fearful that their match made in heaven is too good to be true and that something (a.k.a. Cain) is going to rear its ugly head and mess it all up. I think that there’s enough action in this series to make romantic drama unnecessary but I’m not discounting the possibility just yet.

Gin is the shining center of the Elemental Assassin series’ universe; I absolutely adore her as a character. Blanco’s patience and ability to take advantage of her nemesis’ mistakes are remarkable and skillfully integrated. I like the way that she keeps track of time and of LaFleur’s blunders in her head. A number of new developments occur with regards to Bria Coolidge and her relationship with Gin. I understand that she’s a cop and follows a strict moral code as a result but this is her sister we’re talking about! At least Christmas has a way of bringing families together. All is not forgiven but at least they now have a starting point. Lauren Fortgang impressed me once again with her skills as a narrator and I particularly enjoyed her Russian accent.

Tangled Threads is better than chocolate and that’s not a claim I make lightly!