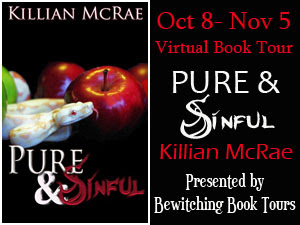 A demon horde was no laughing matter. Riona was an equal-opportunity vanquisher of scum, and each of these minions’ numbers would be called soon enough. The VIP floating somewhere in the crowd was her target, however. Her gaze scanned the room and found his Mediterranean blue peepers fixed in her direction, joined farther down his face by an irksome grin, one corner of his devilish mouth curled.
“Didn’t know it was ladies’ night,” he grumbled.
Riona flexed her hand, cracking her knuckles like a string of firecrackers. “If there’s one thing I’ve never been accused of, it’s being a lady.”
Even without his bronzed-skinned and brawny-shouldered glamour, Riona recognized Jerry from twenty paces. He wore smugness like a well-tailored shirt, and, oh, how she wanted to rip that from him and toss it to the floor. This green-skinned, yellow-freckled, damned-soul-incarnate sipping a pint of Bavarian brew was the reason she was here, after all, and the sooner she toasted his ass and sent his soul “disembodied” back to Hell and into the unloving embrace of Papa Satan, the better.
Demonstrating that he had a bit of backbone left, Jerry didn’t make a run for it. He gave her one pulse-spiking wink, and turned back to the bar. A demon who drank lager with one raised pinky off the stein would have gotten his ass kicked if he’d been any other evil minion. Not Jerry. As one of Lucifer’s top agents earthside, she’d recently come to learn, Mr. Romani had been spreading evil since before the calendar flipped to A.D. The almost unheard of longevity and ability to outmaneuver demon slayers made him a bit of a legend in these circles. The reverence gave him airs. Jerry thought himself a demon of decorum and class. Riona had always said his eccentricities made him look like a friend of Dorothy in public.
But damn it all, if he hadn’t disproven that association to her time and time again in fervent, pulsating, speak-in-tongues and curl-your-toes demonstrations of lust and pleasure against her burning flesh.
But that was before. In his magically-engineered facade, he appeared to her as a black-haired, blue-eyed, Italian-American underwear model, sleek, shiny and sinfully lustable. The glamour, and their ensuing hot and heavy relationship, all amounted to an ingenious scam. Jerry was on a mission, and it wasn’t to win her heart. Lucifer had somehow gotten a heads up that Riona was next up on the roster to be vested as the Keystone Witch of the Pure Souls, she figured. Hell dispatched Jerry to assess her corruptibility, and feel her out (feeling her up was just a bonus). At some point, the need for the game evaporated and it nearly cost Riona her life. No one could have predicted that it would be at that particular moment that her powers would manifest, allowing her to walk through a solid wall and escape. It had to be a one in a million chance, right?
Riona actually knew. The chances stood at 3,456,783 to 1. She had been the power ball winner in the supernatural lottery.
Jerry chuckled from across the silent, tension-locked room. “Of all the bars in all the netherworlds, she has to come walking into mine.”
Riona put up a false front of confidence in her best attempts at a bluff. “Why, hello handsome. Fancy seeing you here.”
He took another swig of his beer before gently placing the bottle on the counter and pushing himself off his barstool. With a swagger that still melted her internally, despite the less than desirable exterior she now beheld, she still remembered the delectable ways in which those hips could swing. He made each step golden as he crossed the room. When they stood face to face, that unique mixture of anticipation and disgust only he could instill took up residency among the butterflies in her stomach. Despite the fact that his demon physiognomy was now clear as day, those azure discs that undid her so often during their short-term fling excited her in ways that weren’t proper for a Sunday.
“I take it you’re not here for a drink, so I can only assume this is that long overdue booty call you know you’ve been hankering for.”
Her breath went jagged as his scaly hand reached up and stroked the flushed alabaster of her cheek. She closed her eyes and tried to regain the locus of control. She would not, could not, let him get the better of her.
“What can I say?” she bantered back, opening her eyes, now brimming with code orange vigilance. “Once you go demon, it’s them that you’re needin’.”
“Cute. We should print that up on t-shirts.”

As Dee sauntered away, Riona focused on the priest’s expression. He wasn’t in his collar and coat today, but always carried the air of the clergyman within to some degree, like he wore his collar on the inside.
“How did you end up here?”
She took in the rugged cut of his jaw, the stubble that showed he hadn’t shaved in a day or two. He wasn’t bad looking by any measure, and he probably could have been quite the heartbreaker if he wasn’t a man of God. His eyes weren’t brown, they were black, and glistened like onyx pendants. A firm jaw and supple lips were likely often employed more for battling the fires of Hell than fanning the flames of lust. Nevertheless, the tools were there to be used, if he so desired. For a man of the cloth, he sure cut that cloth fine. The priest rose to what she considered the perfect height, had a body not too muscular, but hardly milk toasty, and a swagger in his walk that would make a lady think he could move his body in all the ways the good Lord intended.
If only his collar and his personality weren’t pressed with double starch.
“Paolo’s is the best pizza in town. Trust me on that, I’m Italian.” Sarcasm wasn’t his most attractive trait, but it was one of the most prominent.
“Don’t deflect the question,” Riona commanded with a click of her tongue. “I mean being one of the Pure Souls. I know how you found me…”
“… secured in a straitjacket and pending shipment to a cushy psychiatric facility?”
She crossed her arms and grimaced, wondering suddenly if the hex she’d learned to give demons jock itch would work on humans. “Look, you walk through the steel wall of a meat locker and try to explain it to the police in a way that doesn’t get you 5150’ed, and then you can talk. But, I mean, a priest? Isn’t the Catholic Church, you know, kind of not kosher with the whole magical powers and battling goblins thing?”
“Technically, the Catholic Church isn’t kosher with anything,” he returned. “Kosher’s a Jewish thing, not that I think the people of the book are anymore approving of mortal combat with the spawn of Hell. I was born into it. Magic is a birthright, you know. It shows up in my family every couple of generations. Just like being a priest – like my father before me, and his father before him.”