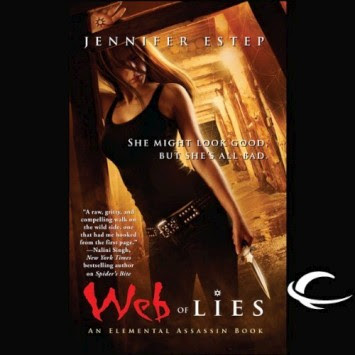 Curiosity is definitely going to get me dead one of these days. Probably real soon.

You might know me as the Spider, the most feared assassin in the South. I’m retired now, but trouble still has a way of finding me. Like the other day when two punks tried to rob my popular barbecue joint, the Pork Pit. Then there was the barrage of gunfire on the restaurant. Only, for once, those kill shots weren’t aimed at me. They were meant for Violet Fox. Ever since I agreed to help Violet and her grandfather protect their property from an evil coalmining tycoon, I’m beginning to wonder if I’m really retired. So is Detective Donovan Caine. The only honest cop in Ashland is having a real hard time reconciling his attraction to me with his Boy Scout mentality. And I can barely keep my hands off his sexy body. What can I say? I’m a Stone elemental with a little Ice magic thrown in, but my heart isn’t made of solid rock. Luckily, Gin Blanco always gets her man . . . dead or alive.

Thanks to Lauren Fortgang’s mesmerizing voice, Jennifer Estep’s poignant first person POV writing style and Gin Blanco’s stellar personality; the Elemental Assassin books are rapidly turning into one of the best Urban Fantasy series that I have ever read. So much so, that I find myself forsaking all of the other lovely novels on my shelves because I can’t seem to get enough of this amazing story. I rarely step into a heroine’s shoes while reading but with this series it’s hard not to. Now, whether adopting an assassin’s mindset in my daily life is a good thing or a bad thing still remains to be seen but regardless, Web of Lies takes escaping reality to a whole new level.

Usually I only read a handful of audio books a year but after having had Estep’s first two stories read to me I can’t imagine experiencing the Elemental Assassin world any other way. Nailing the first person POV is not an easy task to begin with but Jennifer makes it look easy. Her incredible writing style paired with Fortgang’s superb narration helps to tip the realism factor of these novels over the edge. Taking a break from reading a good book is never easy but Estep makes it damned near impossible with this series. They say that the first step to dealing with an addiction is admitting that you have one well, I full-heartily acknowledge that I have a problem and that I have absolutely no intention of fixing it. The story itself is exceptional, the characters are outstanding and the writing is to die for.

Oddly enough, I found that the earlier parts of Web of Lies were a little dull; I just couldn’t get into the McAllister side plot. However, once Jake was “dealt with”, the story really picked up from there. I guess that I’ve come to expect non-stop action from Jennifer Estep and when she actually took the time to focus on some the other important aspects of a good book I got a little impatient. Regardless, once Tobias Dawson showed his ugly mug it was go-go-go until the end. Speaking of the ending, talk about one hell of an “oh shit” moment! It’s pretty much a foregone conclusion that I’ll be reading Venom next.

Donovan Caine is a douchebag. Other than the scorching sexual chemistry between him and Gin, I had a hard time seeing any long term potential for them. Even though I felt sad for Blanco about the way she was treated and how everything kind of blew up in her face; I think that everyone’s better off in the long run. Plus, I barely even know Owen Grayson and I’m already infatuated with him! There’s just something about him that makes me go rawr, hubba-hubba! Yes, I realize that those are sound effects and not actual words but you get the idea.

After two stunning installments and more awesomeness on the way; I think it’s safe to say that the Elemental Assassin series is a must read. Web of Lies is bursting at the seams with snark, badass-edness and unforgettable characters. The main plot that connects all of these books together promises to be a doozie and I for one can’t wait to uncover Jennifer Estep’s end game.

4 responses to “Audio Review: Web of Lies by Jennifer Estep”