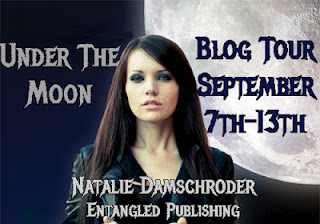 “We’ll talk about this later,” she said as the racket outside the door escalated.

“You bet we will.” He set his jaw and opened the door, striding out ahead of her.

Quinn followed, her heart and body aching. She immersed herself in taking drink and snack orders from the bikers crowding around four-tops and stroking cues around the two pool tables, but being busy didn’t distract her mind. When she wasn’t detouring every trip around the room to peer out the front door to see if Nick had arrived, she was fretting over Sam.

He was her best friend and more. The son of a goddess, he’d been fresh out of college when he came to her six years ago looking for a job. He’d designed his education around becoming his mother’s assistant, but she’d died soon after graduation. Sam believed she’d put too much wear and tear on her body using her power to help others. Since he couldn’t save her, he’d found Quinn.

She poured a pitcher of light beer for a group of Tuesday regulars and watched Sam help Katie deliver a full tray to a celebrating bowling team. He’d become indispensable within three months of her hiring him. He did research for the full-moon jobs on topics as wide-ranging as agriculture, medicine, geometry, and psychology. He also managed the bar and her schedule—managed her so she didn’t deplete her resources too fast or take on jobs she shouldn’t.

He caught her watching as he carried the tray back behind the bar and flashed a dimple. She couldn’t help smiling back, but then quickly bent to wipe down an empty table.

When she needed to recharge during the full moon, he volunteered. He joked that it was the best perk of the job, but they never discussed a long-term plan, assuming they’d take things as they came. Like Sam would meet someone he wanted to be with, and they’d stop.

But it hadn’t happened. Quinn realized that Sam didn’t flirt with any of the women who came through the bar, and he kept his relations with her staff professional. He never pushed her when it wasn’t full moon. There was only one reason a guy would settle for that, and she couldn’t give him what he needed.

She considered and discarded a dozen speeches as she drew ale, poured whiskey, and brushed up against Sam whenever she had to get to the register. She was acutely aware of the tightness of her nipples, the sensitivity between her legs that grew whenever their bodies were near. As the moon rose, even as weak as it was, it tugged on her like the tides. Desire surged and ebbed, but it took concentration on her lingering guilt to force the latter.

The bikers, transients who’d been well behaved and heavy tippers, waved as they left at twelve thirty. To Quinn’s relief, the place was empty of customers within fifteen minutes. For a moment, she watched the waitresses and busboy wiping down tables and flipping chairs while Sam counted cash at the old-fashioned register.

Resigned to the coming confrontation and wanting to get it over with, she said, “Why don’t you guys go home? We can handle the rest of this.” No one argued. As they filed out, chorusing their good nights, Quinn braced herself for Sam’s first salvo.

“Did you talk to Nick again?” he asked, surprising her.

“No.” She ducked under the bar pass-through and crossed to the door to lock it, peering out the small pane of glass onto the gravel lot for the millionth time. “I tried to call, but I still can’t get through.”

“He’s never come this early before.” Sam flipped one of the heavy oak chairs up onto a hewn and polished tabletop. “What do you think is going on?”

“There’s no point speculating.” She went to the other side of the room to help him. “Let’s not start listing all the possible reasons. That’s too stressful.” She didn’t want to tell Sam that Nick had told her to stay close to him. That would increase his worry and maybe keep him from going home. She desperately needed some space to get through the next few hours without giving in to the moon lust.

“Okay. So we’ll talk about us.” Sam pulled down a chair and sat in front of her.

He just looked at her.

“Fine.” She sighed and half sat on a nearby table. Sam waited, his eyebrows raised, his mouth cocked, as if he already knew what she was going to say and found it absurd.

Quinn folded her arms. “I’m ten years older than you.”

“I don’t want to keep you from fulfilling your destiny.”

He chuckled, shaking his head. “And what’s my destiny?”

“It doesn’t matter.” She steeled herself, ignoring the slow roll of need in her gut. “It’s not me.”

Look for Heavy Metal, Book 2 in the Goddesses Rising series, in March 2013!

42 responses to “Tour Stop + Giveaway: Under the Moon by Natalie Damschroder”