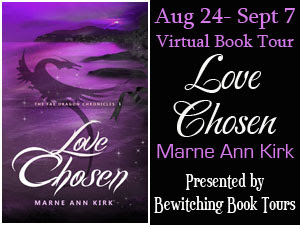 First, I’d like to thank you for having me on your blog. What a fun topic to discuss today.

Before I go too far, I should mention I tend to go on and on. Hey, I’m a writer. It’s a curse. I’ll try to behave, but I’m just sayin’ in advance, I’m sorry. One of my girls has accused me, more than once, of having a severe case of word vomit…she isn’t wrong.

So, I created two playlists for Love Chosen, actually. One was for when I was writing the novel, and the other one was for when I typed and edited. Here’s why: when I’m creating the story, I’m much less productive if I’m singing, chair-dancing, and jamming out to the music—which I tend to do. So, when I’m in the “writing” phase, I listen to a certain style of music…a type that isn’t distracting. When I’m in the less creative phase, I allow myself more freedom with my choices.

Here’s a list of the artists and songs I listened to while writing Love Chosen:

So, that’s the playlist for when I wrote Love Chosen. It’s inspiring music, sensational music; yet it’s not exactly on the “Top 10 Pop Sing-Along.” As I said, it isn’t distracting.

Now, here’s a list of the artists and songs I listened to while editing Love Chosen (this is the music I can sing along to, chair-dance with, annoy fellow writers when we’re camped out on a writers’ retreat with…ya know, the fun stuff:

And those are my Playlists for Love Chosen. I listened to other music, don’t get me wrong. Pandora is an amazing thing and I don’t remember if I had it then or not (I definitely have an account now), but I love music, many different genres. These two playlists are the songs I remember listening to the most, though, through this story.

If you find a new favorite song because of me, well, that will be wonderful. Just fyi, though…a few of them are rated explicit, so be careful what you hear. Myself, I think I’ll go listen to some old favorites.

Tyler pushed his way through the onlookers. They reeked of sex and sweat. The foul odor made his eyes water and his vision blur as he forced his way to the front of the crowd, almost stepping on the female lying in a heap on the floor. He turned, saw his guards at the rear of the crowd, and addressed the unfortunate Lowers. “Leave now.”
He turned back to the scene, expecting them to follow his orders. Disgust filled him as he assessed the scene. Blood pooled on the bed where two bodies laid holding each other. The heads from both bodies were missing. He wouldn’t bother searching for them now. He wouldn’t find them. The killer, it seemed, liked to keep the heads as trophies.
Tyler sighed, becoming aware again of the others crowding the room. When he found those heads, he’d find the sick bastard who did this.
“But what ‘bout Lenore?”
“I ‘eard Issie scream.”
“She all right?”
One chattered over the next in their efforts to find out what happened. They weren’t listening to him.
His eye twitched. He hated when that happened.
How could he make these dullards leave? Did they not see the violent murders on the bed? Or did they not care? Were their lives so barren and meaningless, death didn’t bother them?
His gaze fell on the female at his feet. Her face covered by her mass of honeyed tresses, she lay in a limp pile, her robes undone and revealing a creamy swell of ample breast.
The two victims in the bed were beyond help, but this unconscious female held the concern of the others.
He knelt by her side and lifted her in his arms. She smelled clean, like moss and sea air, instead of the sweaty body he’d expected. Her hair caressed his arm when he stood with her nestled to his chest. It fell like a lowered curtain and hung almost to his knees. A waterfall of honey.
She felt right in his arms; her neck fit into the crook of his shoulder, her breath warmed his chest like she belonged there.
Where had such a thought come from? He didn’t associate with the powerless Lower class. Ever.
He pushed aside a rising need to draw her even nearer.
Tyler faced the crowd again. “As you can see, she sleeps. She’s not injured. Now go. All of you.” He fixed a few of them with the glacial silver stare which always yielded results. “Go back to your beds. I’m Tyler, of the High Council. My warriors will take care of this.”
“But, Issie. Is she hurt?” one barmaid asked, wrapping her arms around her waist as if she feared retching.
“You, take me to Issie’s rooms. The rest of you, go. She’ll be fine.” Or at least I’ll be, if I can have some quiet to think.
“But–”
”What ‘bout Lenore? She pass through the gates?”
Everyone began speaking at once, like a gathering of Lower younglings after a sweet. They had no regard for his orders. Such disrespect was unacceptable. He had to get this under control.
”Go,” he roared, silencing the room.
The crowd shuffled down the hall and disappeared behind different doors. Bits of conversation– “Can’t believe Lenore’s gone,” and “who could do such a thing?” –floated back to him.
Who indeed? The fae were peaceful caretakers for the dragons. Murder didn’t happen among them. It was a coarse crime of the mortals–until three moons ago. And now, it had happened again–to another messenger and another whore-maid.