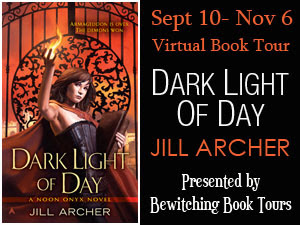 I thought your character names were interesting. I love Noon Onyx, different and a little gothic. Where do you get inspiration for your characters names?

One morning, years ago, I had zero inspiration so I forced myself to write a list of twenty or so total nonsense character names. The first name of the next character on the list had to start with the letter of the previous character’s last name. Noon was sandwiched between “Kevee Nance” and “Oyo Pekette.” I used the name in my first practice novel before I wrote Dark Light of Day. I liked it so much; I decided to use it again.

I violate my own naming rules, but for the most part, my Mederi healers have first names associated with plants or flowers, the Hyrkes (humans with no magic) often have surnames associated with colors. The Maegesters (demon peacekeepers) have Latin sounding names. And the demon names are usually inspired by demons or deities from various real world cultures.

In the world you created, demons are civilized and educated. Where did you come up with the idea that angels and demons could live together?

I wanted to write a post-apocalyptic story, but I wanted it to be different. So I thought:

What would happen if Armageddon happened… and the demons won?

and then I thought:

What would happen if Armageddon happened and the demons won… and life just went on?

Two thousand years seemed like enough time for everyone to bury the hatred and get back to the business of living. Which means life isn’t perfect but it’s not war and it’s not hell. The concept was to create a world ruled by demons who wanted adoration more than they wanted anarchy. So the ruling demons and their warlord’s descendants are no longer at war with the Angels, they’re working with them.

Noon is studying law, did you find it hard to incorporate “legal” jargon into your book?

Not really. It was more a question of how much legal jargon to put in, keep in, or take out. This was an area my editor and I touched on during revisions. My thought was that Dark Light of Day is a unique urban fantasy story for several reasons. One of them was the law student focus. I wanted the level of jargon to be at least enough to establish the “school of demon law” milieu I was trying to create. But readers don’t have to know what all of the terms mean to enjoy the book. Necessary meaning can be derived from context.

Your ideas and descriptions about Patron Demons were interesting. Do you have a favorite from your novel?

Probably Flora, Beltane’s patron. I had fun creating her conflicting back-story myths. She’s a playful demon with an altruistic side. Or maybe not. Maybe she’s just as vain and destructive as the rest.

Noon has a lot of self loathing to work through. Why is it so hard for her to accept who she really is?

Noon hates to kill. She doesn’t want to be associated with death. But because she was born with waning magic, the dark, destructive, fiery magic that’s used to control demons, she’s required to train as a Maegester. This means she’ll be forced to become a demon counselor, judge, or even executioner. For a young woman who just wants the power to grow gardens and heal people, it’s a pretty grim way to make a living. What makes it worse is that Noon is the only woman she knows of who was born with waning magic. It’s the type of magic men are usually born with. It makes her feel self-conscious, instead of strong.

One of the most important storylines is Noon’s self-identity struggle. Should someone pursue a dream to change themselves? Or should they accept the characteristics they were born with and learn to love them? What if they find those characteristics unappealing… or even morally reprehensible? I’m not sure there’s a right answer. I just hope reading about one character’s journey will cause readers to consider the questions.

Ari, who is Noon’s love interest, represents everything she hates about herself, yet she loves him. Heck, even I loved him. Why do you think readers love the “bad boy”?

We could spend an entire workshop discussing the appeal of “bad boys.” (A neat idea I should look into). Personally, I would love to hear other people’s thoughts on this as well. Mine? Hmm… First, there’s the redemption aspect. Human beings are hopeful. We like to think that badness is curable. In romance novels, readers often like to identify with the heroine. We like to think we can be special enough to impact another person’s life in a very meaningful way — by redeeming them. That’s a powerful concept. Second, there’s the forbidden factor. Bad boys are supposed to be bad for you. They’re usually dangerous in some way. Some people like to flirt with danger in real life. Others just want to vicariously experience it through their entertainment. Third, bad boys are more fun. Characters who always do the right thing, never get into trouble, and avoid conflict make boring characters.

An interesting follow up question for those who read Dark Light of Day: Is Ari Carmine really a “bad boy”? Why or why not?

When you come up with the idea, do you outline or free-write?

I’m a plotter. A lot of my work is front loaded. I plan all kinds of story elements ahead of time: characters, themes, settings, major plot points, etc. But when I do finally start to write, I allow myself flexibility.

Writing can be difficult, and finishing a novel is a feat to be proud of. Do you have any advice for those struggling to finish?

I think it depends on what kind of writer you are. If you are a “fast first drafter / pantser” then probably the best advice is DON’T STOP! Once you start writing, use every spare moment of your day to write until you finish that first draft. Compel yourself to keep writing until “THE END” so you don’t get distracted before it’s finished.

But if you’re a plotter, like I am, or you take a long time to write (like I do), probably the best advice I can share is make sure you’ve picked the right project. Sound weird? Maybe. But I think a lot of slow writers quit because their projects don’t hold their attention for the twelve to eighteen months it takes to write a novel. If you’re like me, you’ve got a list of story ideas as long as your arm. But how many of those are really deep enough, interesting enough, emotional enough, to spend a year to a year and a half of your life working on them? If you’re a slow writer, don’t just wake up one day and try to write a novel based on the dream you had. Spend time developing your story and making sure it can be your constant companion during the years it will take to write it, sell it, revise it, and promote it.

How long did it take you to finish Dark Light of Day?

Speaking of years to write, sell, revise and promote… Here are the stats on DLOD:

That’s nearly four years. For others, it takes even longer. My point? Pick a project you love! 😀

Where do you like to write, and for how long in your day?

I’m lucky enough to have my own home office. It’s full of books and things that inspire me: pictures of the Venetian canals & Irish castles; rocks and shells I collected from Hawaii, the Gulf and East Coast; vintage posters made from old real estate ads; wedding blessings; my mother’s pottery and ceramic art my daughters have made.

What’s the one question about your book you want to answer, but no one asks?

I haven’t been asked what apple wine I’d order at Empyr. I’d have to say the Golden Russet. If you could safely play with fire, wouldn’t you? 😉

Failing is not an option…

“I’ve been watching you, wondering, waiting to see where you’d end up. After all, there are other demon law schools,” Seknecus said, making a moue of distaste that made it clear exactly what he thought of them. “But I was happy to see that you chose St. Lucifer’s.”

Technically my mother chose St. Lucifer’s . . . But there seemed no reason to interrupt just to clarify that bit of misinformation. Seknecus wandered around the room, picking through papers, flipping open and quickly shutting the front covers of various leather-bound books, never meeting my eye. I had no doubt, however, that his attention was fully focused on me.

“So, you see, seeing your name on my List wasn’t exactly a surprise, although it appeared much later than I would have liked.”

He did look at me then, with a frown of disapproval. I did my best to look expressionless because none seemed appropriate. It wouldn’t do to look amused, bored or, Luck forbid, rebellious. Seknecus stared at me with narrowed eyes and then went back to wandering.

“You’ve got some catching up to do,” he said, addressing a copy of Sin and Sanction: Codification & Case Law. “It doesn’t matter why or what excuses you’ve got for yourself. You will be held to the same standards as everyone else, regardless of whose daughter you are. And you’ve missed a lot of class already.”

I opened my mouth to protest, but he cut me off with a wave.

“Manipulation class,” he clarified. “You’re going to have to work ten times as hard as everyone else just to pass. Quintus Rochester doesn’t go easy on students and he’s likely to see your absence during the early part of the semester as a challenge. You know, failing is not an option. Not if you want to live.”

At each Interview and Guest blog stop, one randomly selected commenter will win, one Ace/Roc Science Fiction and Fantasy 2012 Sampler. These are bound, print samplers with a color cover and the first few pages of new work from the following authors/titles: Benedict Jacka’s FATED, Alex Hughes’ CLEAN, Jacqueline Carey’s DARK CURRENTS, Steve Bein’s DAUGHTER OF THE SWORD, Anton Strout’s ALCHEMYSTIC, and Jill Archer’s DARK LIGHT OF DAY. Giveaway closes at midnight the day AFTER the post. US ONLY