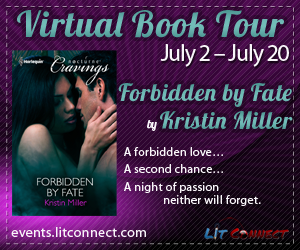 A Werewolf by any other name…

I’ve got a soft spot when it comes to strong, protective males who belong to a family that’ll defend their own at all costs. (You’d think I married into the Mafia, wouldn’t you?) Seriously though, there is something enticing about writing and reading werewolves. They’re powerful and possessive—both in and out of the bedroom—and they exude raw, unbridled passion that threatens to singe the clothes off our bodies.

The werewolves in Forbidden by Fate are exactly the way I’ve described above, but I’ve added a few sparks to the fire.

First, the novella takes place on the enchanted Isle of Feralon, the isle of shifters. Dragons rule the air, Werewolves rule the land and Merfolk rule the seas. When in their human form, each race has identifying marks. While the dragons have “Draco specks” that arch beneath their eyes and the Mer have strands of multi-colored, glittery hair tinseled through their own, werewolves have the coolest mark of all: tattoo-like markings that stretch like vines of smoke up their stomach and coil around their necks. Very tribal. Very hot.

And although there is some common lore that states werewolves can mind-speak or understand each other without words when running with the pack, I took it a step further. I created a society where the males mind-speak, but the females cannot hear them. By doing that, I created a hierarchy that smites of evolutionary prejudice and sets the stage for all kinds of stereotypes and angst against the females in the pack. Of course, setting this up, I had to have my heroine be the daughter of the Alpha…the female who would take charge someday soon. The question is, when she takes charge, can she hear the males? And will they treat her with the same respect that they treated her father and Alpha before her?

I’m curious to hear: what do you enjoy so much about werewolves? Is it their inherently passionate nature? Their protectiveness? The idea of a family pack that welcomes you no matter what? What do you think?

Please leave a comment along with your email addy. Contest is open the duration of the tour (July 2 – 20) and Internationally. Winner will be randomly selected and notified via email.

19 responses to “Tour Stop/Giveaway: A Werewolf By Any Other Name… by Kristin Miller”