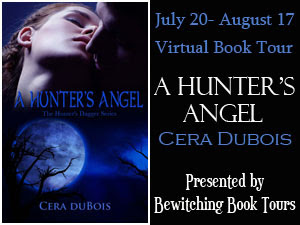 “I’m in love with the man inside the vampire.” Grace moved her hand to thread through his silky hair. When she rested the other over his heart, a soft sigh escaped his lips. Underneath her palm, the slow beat was barely noticeable.
His thumb grazed her cheekbone and slowly trailed down to the hollow of her throat. Her breathing quickened at the zinging anticipation as he caressed the pulse point where he’d claimed to have taken blood from her. He glanced at the spot with eyes as haunted as he sounded. “I’m not a man.”
“But you were once.”
He met her gaze again. “Yes, once.”
His fingers lingered over her pulse. Her heart raced under his touch. She tilted her neck as if his touch awakened some base instinct to offer the sacrifice. “Do you still want my blood?”
Ian stepped away and locked his wide-eyed gaze onto hers. At last, he rasped, “No, I don’t want your blood. Oh, God, I still crave it. You have the sweetest I’ve ever had, but I will never hurt you again.”
She didn’t know what possessed her to do so, but she whispered, “You can take…some of it.”
He closed his eyes, and when he opened them, he acidly said, “No, Grace. I can never taste your blood again. It would kill you.”
Fear of what she’d wanted him to do tumbled through her. She stepped away, and for a moment, she considered telling him to leave. How did she know any of this was real? She couldn’t imagine she’d ever freely offer a vampire her blood. Did she really believe him? He was sucking her into his insanity. But if this was true and he could make people do things against their will, maybe he could control her feelings.
“Maybe I should go?” Ian backed away another step and headed toward the counter where he’d left his dagger. He turned back to her with the sheath in his hand. Her heart shattered with the knowledge that, if he walked out the front door, she’d never see him again. “Goodbye, my sweet angel.”
His jagged murmur ripped at her soul as his eyes took on a blazing intensity and snared hers. She felt a pressure in her mind, and she knew what he intended to do. He wanted to erase her memories of him.
No!