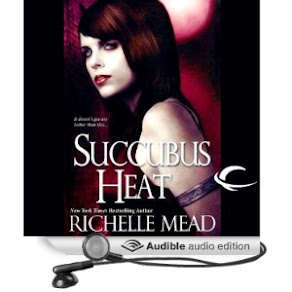 Georgina Kincaid has been a bad, bad succubus, which should be a good thing. But lately, thanks to her foul mood over breaking up with best-selling writer Seth Mortensen, she’s been so wicked that Seattle’s uber-demon Jerome, decides to “outsource” Georgina to a rival–and have her spy for him in the process.

Being exiled to the frozen north–okay, Vancouver–and leaving Seth in the cozy clutches of his new girlfriend is unpleasant enough. Then Jerome is kidnapped, and all immortals under his control mysteriously lose their powers. One bright spot: with her life-sucking ability gone, there’s nothing to keep Georgina from getting down and dirty with Seth–nothing apart from his girlfriend that is. Now, as the supernatural population starts turning on itself, a newly mortal Georgina must rescue her boss and figure out who’s been playing them–or all hell will break loose.

I can’t empathize enough on how outstanding this entire series is and it’s also an absolute must read in my books but this particular installment really wowed me. It quite possibly might be my favourite one yet. However, I seem to say that every time I review one of the Georgina Kincaid novels so it’s hard to say for sure. What is clear is the fact that if you haven’t given this series a try yet then you’re missing out! Plus, narrator Elisabeth Rodgers really gives these stories an extra boost. For me, she’s become the official voice of Georgie.

I have to start off by saying that I absolutely adored the plot line of this book! Georgina has been a bad succubus and, as a result, has been shipped off to Vancouver to deal with the “evil satanist Canadians”. It’s so rare to find a Canadian local in paranormal fiction that when it does happen I can’t help but get a little giddy. I disagree with my fellow canucks being portrayed as wicked but then again that’s what makes this story so hilarious. However, this is only a small part of what this book is really all about. Conspiracies, betrayal and second chances are just a few of the things that you can expect to find in this installment. Richelle Mead has outdone herself with this one!

Georgina and her crew of supernatural misfits find themselves temporarily stripped of their powers. This opened up a whole new realm of possibilities for the characters in this series. The vampires loved it because they’re finally able to work on their tan but Kincaid… not so much. At least at first. This is the most vulnerable that I’ve ever seen her. She’s normally a balls-to-the-wall type of girl but in this installment she’s afraid of everything. Before the reasons and limitations of her succubus mojo is explained she has no idea what’s going on. Is she mortal? Can she get pregnant? Is she free of her contract with Hell? Georgie has been invincible for millenia and then all of a sudden she’s afraid to go outside, to cross the road, to smoke a cigarette, etc. It was interesting to watch a powerful succubus become scared of her own shadow.

After Succubus Dreams I thought that Seth was a thing of the past. Even though I was sad with how their relationship played out I was also excited about seeing Georgina move on with her life. This book doesn’t make everything better but it does provide some temporary relief where Mortensen is concerned. I don’t want to give too much of their story away because it’s a good one but Mead does a great job of finding a temporary solution to their problems. Although, the ending was like a slap in the face; adding insult to injury so to speak. I’m so frustrated with Richelle right now! But then again, I guess that’s what keeps me coming back for more.

I can’t wait to see what’s in store for Georgina Kincaid in Succubus Shadows. In case I wasn’t clear in my review: I love this book, I love this series and you NEED to read all things Georgie!