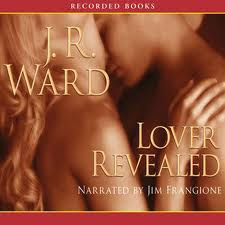 Butch O’Neal is a fighter by nature. A hard-living ex-homicide cop, he’s the only human ever to be allowed in the inner circle of the Black Dagger Brotherhood. And he wants to go even deeper into the vampire world – to engage in the turf war with the lessers. His heart belongs to a female vampire, Marissa, an aristocratic beauty who’s way out of his league. And if he can’t have her, then at least he can fight side by side with the Brothers.

But fate curses him with the very thing he wants. When Butch sacrifices himself to save a civilian vampire from the slayers, he falls prey to the darkest force in the war. Left for dead, he’s found by a miracle, and the Brotherhood calls on Marissa to bring him back, though even her love may not be enough to save him.

Butch has been one of my favorite characters of the Black Dagger Brotherhood series since he was introduced. What attracted me the most about him was the fact that he is the only human out of the bunch and yet he still manages to hold his own in the vampire world. This alone makes him the most badass of them all in my opinion! His story is different from those of the brothers in many respects but it’s just as riveting and heartbreaking. Plus, it’s about Marissa too who’s a phenomenal character in her own right. Lover Revealed will make you weep, seethe with anger and then weep some more. It’s a killer ride but the ending makes it all worth while.

Lover Awakened is a hard act to follow but Ward still manages to deliver a solid fourth installment. I particularly enjoyed the friendship between V and Butch in Lover Revealed. It’s not easy to convey brotherly love without having their manhood take a slight hit but this book succeeded. The level of devotion and honesty that comes through in this novel is breath taking. The characters try to play it down with some manly joking which made the emotional elements both moving and funny at the same time. Butch puts up a strong front but on the inside he’s really quite vulnerable. I liked reading about his personal conflicts and his struggle to find a place to belong within the brotherhood.

Marissa is just as troubled as Butch but because she’s a female her emotions are always close to the surface and sometimes make her appear weak. I found that she grew a lot as a character in this book. She finally takes charge of her life and even pulls a few ballsy moves that really impressed me. Oh, and she finally gets laid! Anyone who’s capable of remaining a virgin for over three centuries deserves some credit. As a result, in true Black Dagger Brotherhood fashion, Lover Revealed is as scorching hot as its predecessors. Needless to say that after Marissa discovers what all the fuss is about she is hooked! The fact that she’s getting it on with Butch doesn’t hurt either.

This was my first audio book experience with a male narrator. It definitely took some getting used to and I found the female dialogue a little comical at times but overall Frangione does an excellent job. He has a great tone and accurately portrays the badass attitude that’s prevalent throughout this series. Jim also reads the action-y chapters with enthusiasm and the sex scenes with heat.

The ending sort of wraps up Butch’s humanity “problem” with a nice, neat bow but I think that it was fitting and that he deserves his happily ever after just as much as any of the brothers do. Lover Revealed is impassioned, dramatic and delivers a great story. Lover Awakened retains its top seat among my favorites in this series but all bets are off because Vishous is up next in Lover Unbound!