Hi Amanda! Welcome to Rabid Reads! Amanda’s another debut author who’s first book is being published during the month of December and she was kind enough to make room for me on her tour (see full schedule). Be sure to read all the way to the bottom of this post for a chance to win your very own copy of Shaedes of Gray! Also, stay tuned for my review. It was a five star read for me!

Five Holiday Foods I Just Don’t Understand
First of all, thanks so much to Carmel and Rabid Reads for hosting me today! It’s so awesome to be here! One of the things I love about the holidays is the food! Dieting should be outlawed from December 15th until Super Bowl Sunday. But not every holiday food is made of win. There are some things out there that should never, ever be consumed by man or beast. And since I’m pretty much gearing up for a food-filled next couple of weeks, I thought I’d talk about five holiday foods that I just don’t understand!
Fruitcake

We’re all thinking it, so let’s just get this one out of the way right now. Besides looking like something composed of every left-over in the refrigerator, Fruitcake looks like something you wouldn’t willingly eat unless a zombie apocalypse had made food sources so scarce that you had no other choice but to choke it down. I suppose there are some great fruitcake recipes out there as well as fruitcake lovers. But until a fruitcake comes along to change my perception of this holiday treat, I’m going to take a pass.
Oyster stuffing

This is just my personal taste, because I know that tons of people LOVE this dish. But unless you’re stuffing a salmon, oyster stuffing has no place on a holiday table. Sure oysters are delicious, and oyster stew is pretty common holiday fare. But in my mind, oysters and turkey have no business fraternizing. If they wouldn’t hang out together while they’re alive, they shouldn’t hang out together on my plate. The only time land and sea animals belong together is when they’re accompanied by the words: Surf and Turf.
Divinity

What is divinity, anyway? My grandma used to make a batch of fudge and a batch of divinity every year and I swear, none of the kids touched this fluffy white mystery candy. From what I can tell, it’s nothing but sugar, corn syrup, egg whites, and nuts. So I’m thinking it’s supposed to be some kind of meringue-type confection, but honestly, it doesn’t even really taste like anything. The name is as light and angelic as its appearance, though given the chance, I’ll take a plate of sinful fudge over this heavenly treat any day of the week.
Jell-O dishes with UFOs inside

Can somebody please explain this to me? I mean, what sort of evil mastermind invented this dish? In what universe is it okay to suspend chunks of carrots, olives, peas, or worse inside of gelatin? I can understand fruit and whipped cream. Jell-O is a dessert food, people. But once you’ve hidden green olives with pimentos inside that transparent casing, you’ve crossed the line. The following items should never—and I mean never—come in contact with Jell-O: beets, celery, carrots, soy sauce (seriously I found a recipe that actually calls for this), bean sprouts, onions, olives (we’ve been over this one), water chestnuts (yes, you heard me right), cabbage, cucumbers, and last but not least, cherry Coke.
Mincemeat Pie

Let me give you a quick rundown of the ingredients that make up a traditional mincemeat recipe: round steak, apples, apple cider, sugar, currants, raisins, candied fruit, ginger, cloves, nutmeg, cinnamon, salt, sour cherries. And did I mention ROUND STEAK? If that isn’t enough to turn your stomach let me fill you in on a little something: after you’ve diced everything up and cooked it, you have to leave it sitting in your refrigerator for a week before you put it in the pie. One. Week. Most of the leftovers that have been sitting in my fridge for a week are starting to grow an unidentifiable fuzz and are ready to be thrown in the trash. Never mind the fact that when you dig in to these (supposedly) savory fruity pies, you run the risk of chewing on something gristle-like. Nope. Not happening. Pass.

Okay, okay, since I don’t want you to have the sour taste of onion Jell-O salad lingering in your mouths, I’ll leave you with a few of my favorite holiday food items:

This stuff is de-li-cious! If you haven’t tried it, go out and buy some. You can thank me later. 😉

My mom makes the most scrumptious sugar cookies in the WORLD! I try to make sugar cookies every year and they never turn out as good as hers.
And last but not least…

Again, HUGE thanks to Carmel and Rabid Reads for hosting me today! What are some of your least favorite holiday treats? Your most favorite?

Amanda is giving away one copy of Shaedes of Gray to my followers. US/CA mailing addresses only. Please read my Giveaway Policy before entering. 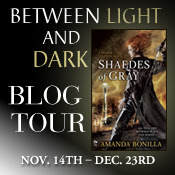