What is the Series about?

My favorite line is actually the tag line to my first book. It really gives you a snapshot in one sentence of what the book is about.

Becoming a vampire is easy. Living with the condition, that’s the hard part.

You might have read books about vampires, but how many of them took you step by step through the emotional turmoil of what that change actually entails? In Immortalis you’ll see a normal, everyday girl lose everything as she becomes a creature of the night. But it’s not all doom and gloom. Sure, there’s a learning curve there, but if she can overcome it, both she and you, the reader, will find that it can be pretty sweet!

When did you start writing this series?

How long did it take you to write it?

The first book in the series, Immortalis Carpe Noctem, being my debut novel, took me 5 years to write, edit, revise, edit again, etc… It was a long process, but during that time I was also learning how to write for others and not just myself. Subsequent books were written much faster.

Where did you get the idea from?

The idea came from reading lots of other vampire books and wanting to focus on the actual transformation and its effect on a normal person. In Immortalis, I take you almost step by step through the transformation of this normal girl, into a creature of the night. It’s not easy but as with many things that happen in life, you have to deal with the changes. That’s where the title comes from. Carpe Noctem, seize the night. For this main character, that’s exactly what has to be done. She has to learn how to seize the night.

Were there any parts of the book where you struggled?

Writing the debut novel, the whole thing was a learning process. I remember focusing so hard on rules and plots and outlines. It frustrated me so much that I took a very long break. While I was on break, I allowed myself to free write on other projects. Free writing taught me that I don’t have to plot and outline and stick to rigid structures. I learned that there are different types of writers and different styles. I needed freedom to just let the story come out organically. That’s when I was able to come back and finish the novel.

Once I learned to let myself write organically, the story flowed out very easily.

Are your characters entirely fictitious or have you borrowed from real world people you know?

Some characters are based on people I know. Nicholas for example, he’s based on my own husband with a little added snark for good measure.

We all know how important it is for writers to read. Are there any particular authors that have influenced how you write and, if so, how have they influenced you?

I’m a Patricia Briggs, Sherrlyn Kenyon, Anne Rice, Laura K. Hamilton, (the list could go on and on) fan. Basically, if there is a vampire, werewolf, or fae creature in your work, I want to read it. I’m addicted to anything paranormal, with only one exception… Zombies. I just can’t do zombies. They scare the crap out of me. LoL.

Do you have a target reader?

Fans of Paranormal and Urban Fantasy are the readers I target. I feel that those are the ones who will most appreciate this story.

Do you have a writing process? If so can you please describe it?

Sit down, turn on computer, and write! It’s as simple as that. I need to be able to free write, no restrictions.

Do you outline? If so, do you do so extensively or just Chapter headings and a couple of sentences?

Nope, no hard outline. I generally have an idea of where I want the story to go, but I don’t have anything strict I adhere to.

Do you edit as you go or wait until you’ve finished?

Editing comes after the first draft is complete, and then it’s a process of rewriting and reviewing then editing.

Do you listen to music while you write? If yes, what gets the fingers tapping?

It depends on the scene. If I am writing action and fighting, I need something like hard rock. If I a writing a love scene, I need softer music.

Thanks for reading, and if you want to check out my work, you can find me at

Bleeding to death after brutal mugging on the campus of UNLV, Twenty-five year old Alyssa, is rescued by the cold and aloof, vampire, Lysander. Taking pity on her, he shares the gift-and curse-of immortality. She awakens as a vampire and is soon devastated by harsh realities of her new way of life: the loss of her friends, her independence, and her humanity.

As if having her humanity stripped away was not enough to make life interesting, Alyssa finds out her “turning”, did not go unnoticed by the rest of undead society. Old enemies; an ancient sect of vampire hunters, known as the Acta Sanctorum, as well as a powerful Vampire mistress, each set plans in motion to destroy both Alyssa and Lysander.

Only by accepting her newfound immortality, seizing the night, will Alyssa hope to survive. She and Lysander must fight together against two sets of enemies bent on destroying them both.

Becoming a vampire saved Alyssa from death, but the price was high: the loss of everything and everyone attached to her mortal life. She’s still learning to cope when a surprise confrontation with Santino Vitale, the Acta Sanctorum’s most fearsome hunter, sends her fleeing back to the world she once knew, and Fallon, the friend she’s missed more than anything.

Alyssa breaks vampire law by revealing her new, true self to her old friend, a fact which causes strong division in the group that should support her most: her clan. Worse yet, her revelation entangles Fallon in the struggle between vampires and hunters and The Acta Sanctorum is ready to attack again, with a new army of hybrid creations: the Frenzy Soldiers.

If Alyssa hopes to survive and keep her mortal friend safe, she’ll have to be willing to make a deal with the enemy, and regain her clan’s support. It will take everyone working together in a precarious truce to fight against the Acta Sanctorum’s new threat. 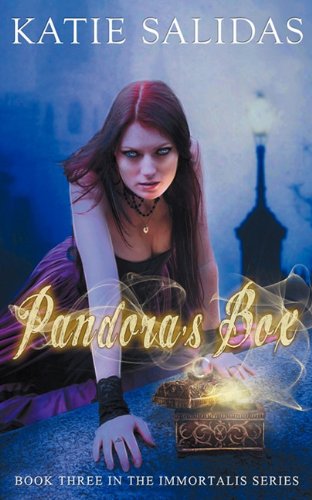 After a few months as a vampire, Alyssa thought she’d learned all she needed to know about the supernatural world. But her confidence is shattered by the delivery of a mysterious package – a Pandora’s Box.

Seemingly innocuous, the box is in reality an ancient prison, generated by a magic more powerful than anyone in her clan has ever known. But what manner of evil could need such force to contain it?

When the box is opened, the sinister creature within is released, and only supernatural blood will satiate its thirst. The clan soon learns how it feels when the hunter becomes the hunted.

Apparently powerless against the ancient evil, the clan flees Las Vegas for Boston, with only a slim hope for salvation. Could Lysander’s old journals hold the key? And what if they don’t?

And how welcome will they be in a city run by a whole different kind of supernatural being?

Winner’s choice of one eBook in the Immortalis series. Please read my Giveaway Policy before entering. Open internationally, ends November 25th at 11:59 PM EST. Leave a comment with your e-mail address to participate.

This Giveaway is now closed: WINNER

In addition, there is a tour wide giveaway. The Grand Prize is a signed set of all 3 books in the Immortalis Series with book swag. Open internationally and closes on January 1, 2012. To enter fill out this FORM.