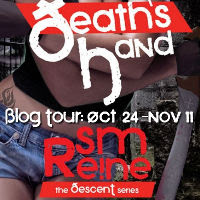 Even though I usually write fantasy, I’m a horror girl at heart. Sure, I love Rachel Vincent and Ilona Andrews, and I dig the “classics” like Anne Rice, but when it boils down to it, my soul sings for the works of Edgar Allan Poe, HP Lovecraft, and Stephen King. My mom used to read “The Telltale Heart” to me before I went to bed, and I dreamed of hearts beating in dark places underground instead of whatever it is most girls dream about—unicorns and fairies or whatever, I guess.

So it’s no surprise that Death’s Hand (which is urban fantasy) has a strong horror slant. My heroine, Elise Kavanagh, has retired from the rough and tumble life of being a traveling exorcist, and she’s settled into a cushy office job. The usual fantasy route would probably be to introduce a hot paranormal guy for drama’s sake (which is also awesome), but I can’t resist making things ugly—so a harmless five year old girl gets possessed by a powerful demon, bodies rise from their graves, and there are horrible, horrible deaths.

I guess that’s the horror side of me coming out. Sure, there’s hot guys too—I mean, you have to have hot guys—but horrible things happen to them. I can’t seem to resist the urge.

For instance, the hottest guy in the book (not that I would ever pick favorites!) ends up getting kidnapped by demons and carved up with a knife. And I really like that character! The things I do to the characters I hate are even worse—like horrible, undignified methods of death, followed by total desecration of their bodies.

For the record, I am as terrible an ex-girlfriend as you think I would be.

One of the coolest things about the modern fantasy genre is that it’s forgiving to crossover writers like me. Urban fantasy was birthed as a mash-up of detective noir and horror, after all, so it’s kind of the Frankenstein’s monster of literature.

Everything is fair game, whether it’s sexy vampires, beautiful faeries, or terrifying creatures from Hell. You can have the hot paranormal guys mixed in with horror that doesn’t hold back. You can get the creepy prickles at the back of your neck with heart-pounding action and the kind of steamy scenes that make me embarrassed to read the book around my family.

That’s why I love urban fantasy even though I’m loyal to horror, too. You can have it all!

Sometimes I wonder what Edgar Allan Poe would think of modern books. He pioneered the detective genre and revolutionized horror, so urban fantasy could really be considered his baby. I think he would be proud of it—and hopefully he would appreciate all the awful things I do to my characters in Death’s Hand.

Giveaway
S.M. Reine is offering up a swag pack of signed bookmarks and charms to one winner. Open internationally, ends November 11th at 11:59 PM EST. Please read my Giveaway Policy before entering.

This giveaway is now CLOSED: Winner 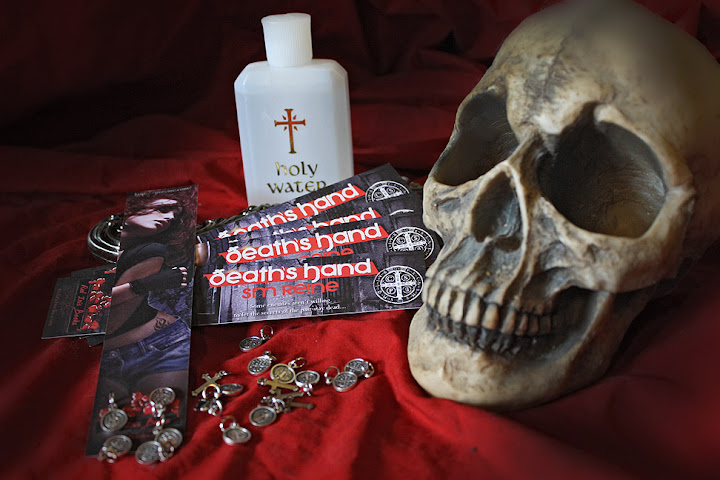 To enter: leave a comment with your e-mail address and answer the following question: