I’m sure that the reason why I chose to cover Norse mythology during the Midnight Summer Festival was obvious to my long-time followers. But for the rest of you… I picked Norse because their myths are filled with wolves! M.D. Lachlan told us about Fenrir on Sunday but today is all about Odin’s wolves!

After creating the world with his brothers, Odin became lonely traveling by himself so he created the first wolves: Geri and Freki (both meaning “the ravenous” or “greedy one”). The ruler of Asgard and these furry canines quickly became inseparable. They traveled the world together and slowly populated the Earth with wolves, their offspring. 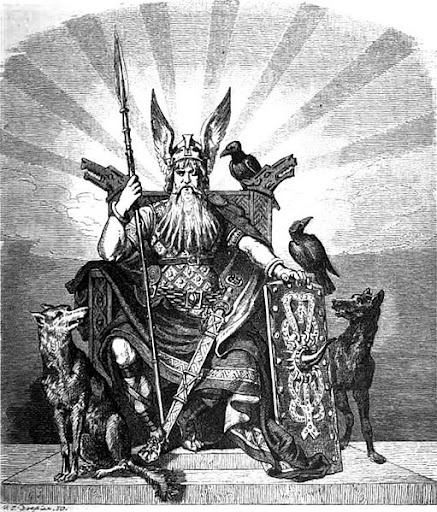 Geri and Freki sometimes had difficulty finding prey to feed themselves so Odin created two ravens, Hugin and Munin, to help them out. In return for the ravens’ assistance, the wolves shared their kills with their feathered friends as thanks. Together this quartet never went hungry. To this day, ravens and canines are often found collaborating in a similar fashion in the wild.

Next up, Odin created the first humans and told them to learn from Geri and Freki because they could teach them many valuable lessons. Among others: how to cooperate, hunt, care for their families and defend themselves. It is said that Odin fathered children that were part human and part wolf that became known as the Volsungs/Wulfsungs. Legend says that they were great warriors (the origin of shifters perhaps?).

In the end, Odin was killed by a wolf as payment for oaths that were broken. It was a honorable death that the God would have been proud of.

4 responses to “The Myth of Geri and Freki”