Today I have the pleasure of interviewing two new YA authors: Natalie Zaman & Charlotte Bennardo. Their book, Sirenz, is available now. Welcome ladies!

Are you both shoe addicts? If so, what’s your must-have style/brand?

Nat: Hmmm… I do love my shoes, but I have this thing about having TOO MUCH STUFF—it’s like going to a restaurant and having too many things to choose from; I get overwhelmed. My philosophy is to have a few really good pieces and to build around them, and when it comes to shoes and bags, go classic (goes with everything, every style) and get the best you can afford. Fave brands? I love Vivienne Westwood shoes (hence the appearance in SIRENZ). I have a pair of her pirate boots that are beat to death (but IMHO they look better weathered—savvy?)

Char: I’m getting worse—now when I go shopping, I look at shoes first. If I buy an outfit, I’m thinking of the shoes that I can wear or that I’ll need. But I’m no Imelda Marcos; I make my small collection work. I just wore out my fave black flats (Anne Klein, soooo comfy!). I like quality shoes- no vinyl, plastic or cheapies, so anything from Macy’s on up. I’m not a shoe snob!

Nat: Of the Greek variety? I’m a sucker for Orpheus—besides the whole music thing, he just HAD TO LOOK BACK! C’mon? Couldn’t you just hold it for like one more minute? Men…
(insert grumble).

Char: I’m fascinated by all their doings, they’re such a bunch of spoiled children! If I had to choose one (and not our own scrumptious version of Hades) I’d have to say the Persephone myth. It’s romantic and sad, but I wonder if she really was as innocent as the myth portrays.

I can’t believe you got Carlo’s Bakery to make the cake for your launch party! How did you manage that? Did you get to meet him?

Nat-n-Char: We’re lucky that we live close enough to the bakery to do this (although from watching the show it looks like they’ll deliver cakes within a certain distance). It was loads of fun—not to mention tempting (LOVE their red velvet cupcakes!)—to visit the bakery. We didn’t get to meet Buddy, but Nat chatted with Mauro on the phone and when we was there Mary (Mom) was around—she’s a real hoot! We worked closely with Mauro’s assistant Nicole who was just fantastic.

Have either of you lived with a roommate at one point or another in your lives? And was it good or bad?

Nat: I had a few different roommates in college, but none that were terrible. I think it’s hard to live with anyone—you really get to know all their good—and bad—habits/points etc. And they get to know yours. I think what it comes down to is having a mutual respect for each other’s space, property and schedules… no easy task!

Char: My first year in college I was in a triple; one roomie was a wild party girl, the other seemed like she was straight from the nunnery. There I was, smack in the middle. And boy did they squabble. I tried not to take sides. The party girl eventually dropped out and it was better. After that, I was in a triple again, but those roomies were easygoing and on the ‘same page’ as me.

When I think of Sirens, mermaids usually come to mind. Where did the idea of birds some from?

Nat: We found out that sirens were half bird women in our research into the myths—one thing we tried to do was to stay as true to the myths as possible.

Char: It surprises a lot of people, they expect mermaids, so it makes us stand out. And birds are funnier than mermaids.

If you could be any mythological character for a day; which one would you chose and why?

Nat: Hmmm… Athena? No one messes with her. She’s tough and smart. Or maybe Zeus? It would be nice to be top-dog for a day. Unfortunately, all mortals seemed to get screwed, so they’re out of the question.

Char: I’d be either Persephone because she has both Hades and her mother Demeter dancing to her tune, or Hera, queen of the pantheon. No matter what happens, they win.

Was it difficult writing the book from two POV’s? Did each of you pick a character or did you mix it up?

Nat: The book was meant to be in two different points of view from the beginning. Char did the initial drafts for the Shar chapters and I did the Meg chapters. Then we HAD to mix it up. We edited and polished together, so we’re knee-deep in each other’s chapters. Sometimes it’s hard to remember who did what.

Char: I find it easier from the 2 POVs because I know my character very well. With Nat writing from her POV, I can be surprised at her character’s reactions, actions and consequences. It’s like putting your hand in the grab bag; you don’t know what you’re going to get.

Describe Sirenz in 5 words or less:

Char: Since she stole the words I wanted to use, I’ll say suave, sophisticated, silly, sexy and snarky.

Is there more to come in the Meg and Shar story? Any talk of a sequel?

Nat-n-Char: We’ve actually sold books two and three in the series! We originally planned for four books, but we’ll have to see how these first ones do. SIRENZ BACK IN FASHION hits the shelves in Summer of 2012!

Where did you get your inspiration for Hades? Is he your ideal fictional boyfriend?

Nat: Weeeellllll….When we first started we bandied about the gods of Xena Warrior Princess—but no one really specific. Once we really got into the character we started talking about who would play him if Sirenz was a movie or TV show (Oh Hoolllllywoooood! You listenin?), and we thought… take it away Char!

Char: One look at Ian Somerhalder from Vampire Diaries and I called Nat- “I found Hades!” Imagining him portraying Hades with a smooth, suave and delicious naughtiness made it easier to write Hades. Everyone has a soft, vulnerable spot, even bad boys. And secretly, don’t all women want the rebel guy, to see his soft spot, to save him? And to be tempting and seductive, he had to be gorgeous… sigh. 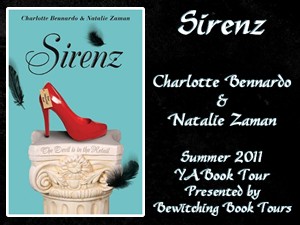 This Giveaway is now CLOSED: Winner
1 Copy of Sirenz + Swag
Visit my co-hosts!