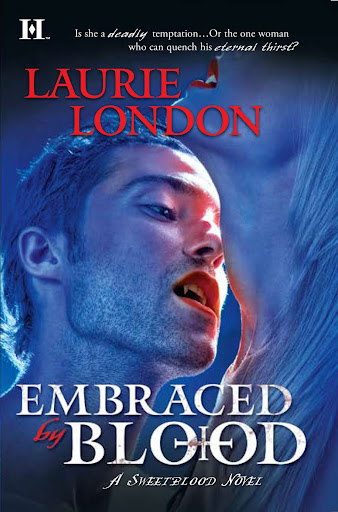 Alfonso Serrano is a hunted man. For months he’s managed to elude the Darkbloods, vengeful foes who won’t rest until he’s dead. But he still craves one dangerous temptation: Lily DeGraff, the sexy Guardian agent he’ll risk anything to protect.

Lily is a wanted woman. Her talent for tracking Sweet—a rare blood type that’s addictive to vampires—makes her a prime target for enemy capture. Her only hope is the stealthy vampire operative who stole into her bed…then left her in despair. Danger aside, Lily won’t let Alfonso near her heart again—until an irresistible hunger threatens to draw them back together… and into an assassin’s snare.

Going in to this book I was slightly worried that it’d be just more of the same. Laurie London’s vampire world is definitely interesting but it’s hard to keep a Paranormal Romance series fresh. I was pleasantly surprised by Embraced by Blood. I’ll even go as far as to say that I liked this book even more than Bonded by Blood. Alfonso and Lily are such great characters that it’s nearly impossible not to get swept away in their love story. This novel has just the right mix of romance vs action.

Lily and Alfonso’s chemistry as a couple and their charisma as individuals made this book for me. I enjoyed the pace at which these two rekindle their flame. On one side, there’s Lily the scorned lover. On the other, there’s Alfonso who’s trying to protect his beloved by lying to her (yeah, because that usually works out so well). This vamp couple didn’t reunite until halfway through the book. Which in my opinion, was just perfect! It gave them ample amount of time to clear the air and to set the record straight as to who did what and why. Their personalities are also very different. Miss DeGraff is a do-it-by-the-book type of girl while Serrano is the brute, fly-by-the-seat-of-his-pants type. Needless to say, their views on how to get a job done differ greatly! I knew what the ending for these two would be early on but if the book had finished any other way I think I would have been disappointed. So no harm done there.

Aside from the main romantic plot line there are several other smaller ones that really helped to make this novel into a well-rounded read. There’s the Darkbloods’ newest evil scheme, the hostility between the Serrano brother’s and many other bits and pieces that incorporate characters from the first book. I also liked the way that London brought readers up to speed on the Sweetblood series. It wasn’t overwhelming nor did it consist of regurgitated lines from Bonded by Blood. Well done!

The main villain, Alfonso’s blood assassin, kept the suspense levels on high throughout the novel. I liked the idea that he’s the best of the best, part of an elite group of killers. He’s creepy, conniving and just downright evil. My only complaint is the way in which he was bested. I expected an intense all out brawl between him and Serrano. I was happy that Lily got her two cents in at the end but I could have done with a little more violence.

The first book of this series was good but this one is better! Reading Bonded by Blood before this one is not essential. It’ll provide you with extra background info on some of the side characters but this novel stands well on its own. The romance side will leave you feeling weak in the knees at first but that’s short-lived because Laurie London cranks up the heat in record time. You’ll be feeling things in a few other body parts sooner rather than later! Embraced by Blood is a great addition to the Paranormal Romance genre and this series should be added to your must-read list. I’m eager to hear Jackson’s tale in book three! A smart-ass romance novel? This I have to see! 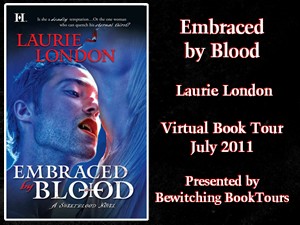