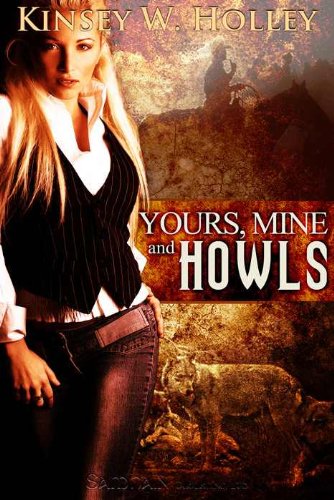 She hasn’t been the same since.

Ally returned from the hereafter with strange new powers, burdened with the secret of why and how she survived. She managed to scrape her life together and raise her cousin, but now he needs a pack to guide him into adulthood. That means pulling up stakes yet again and heading for Colorado to find the only werewolf qualified for the job. A werewolf, she discovers, who tempts her to give up control in a thousand sinful ways.

Cade MacDougall, Alpha of an unrecognized pack, has a tragic history, a sizable ranch, and a daughter who thinks she’s a cat. Time to find a mate? Don’t make him laugh. Until Ally shows up with a smokin’ hot, preternaturally strong body that smells like mine, and introduces him to a nephew who holds the key to unraveling mysteries about Cade’s family—and himself.

But Ally’s holding something back. As Cade’s enemies gather, the cowboy and his secretive new mate must come clean about their mysterious pasts…or else all hope of protecting their newly formed family—and their future—will be lost.

This book is sort of like a sandwich. The beginning and ending felt like a whirlwind storm where so much information gets thrown at you that it’s overwhelming. The meat in the middle though is delicious and worth savoring. Please forgive my food analogy, I haven’t eaten breakfast yet. Yours, Mine and Howls is at its core a werewolf book and I really enjoyed that aspect of it. However, there’s a bucket full of other supernaturals such as fae, selkies, shifters, Old Ones and the list goes on that turn this novel into a test of your powers of deduction. The main story is a gripping read but the many side plots and overabundance of lore weighs the book down.

I’m still not entirely sure what to think of Ally. She’s a very complex character with both good traits and bad. She has all of the makings of a great pack alpha but there’s only one problem: she’s not a werewolf. As a result of a freak accident she now possess the strength, speed, healing abilities and smell of her lupine counterparts. When Ally finds herself living in a pack she butts heads quite severely with the alpha; which at first was understandable. It’s hard to accept going from being at the top of the pecking order to the bottom. But after a while it got to be tiresome. In her place, I would have gladly accepted having such a huge weight lifted from my shoulders but Ally refuses to relinquish the reigns. She fights the pull that Cade has over her and she’s incredibly stressed out about whether others will be able to accept her freakish nature. I wanted to like her but she was just so… abrasive.

The main plot was fascinating. It flowed well and was full of snark and funny lines. I enjoyed uncovering the mystery behind the MacDougall family. The blooming relationship between Cade and Ally was cute and dramatic. I found that they complimented each other well. That is, after Allison finally stops keeping secrets from everyone. That part of the storyline confused me a little. To my knowledge she wasn’t sworn to silence so I had a hard time understanding why she just didn’t tell everyone why she’s different. I mean, they’re werewolves. That in itself is an abnormality and I’m sure that they would have been open to hearing her story if Ally had tried. Why she felt the need to keep it under wraps is beyond me. I got several smiles out of their creativeness when it came to choosing out of the ordinary places to get-it-on. It added a much needed lighter element to this heavy read.

The downside of this tale was the numerous side plots. There’s a murdering alpha on the loose, a crazy high fae, tons of family secrets, etc. The book jumps from one intrigue to the next and then back again. I struggled to keep up. Maybe a flow chart would have helped but that seems like a lot of work to invest in a leisurely read. There’s also mad mythology that’s compacted together at the end. If you can get past all of that and stay focused of the werewolves this novel is a good read. I think Holley tried to cram too much into one story. This was only her second crack at authorhood so I’ll cut her some slack. Perhaps she’ll iron out all of the kinks in book number 3. Yours, Mine and Howls is a fast paced, humorous read that’ll keep you guessing and give you a few new creative ideas to try with your lover.

2 responses to “Review: Yours, Mine and Howls by Kinsey W. Holley”