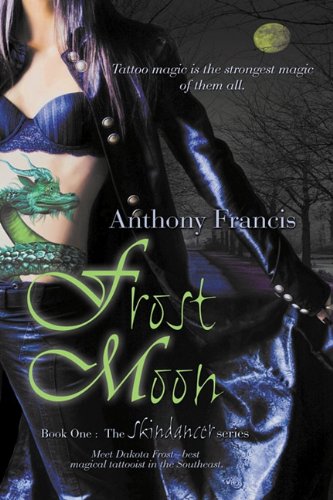 In an alternate Atlanta where magic is practiced openly, where witches sip coffee at local cafes, shapeshifters party at urban clubs, vampires rule the southern night like gangsters, and mysterious creatures command dark caverns beneath the city, Dakota Frost’s talents are coveted by all. She’s the best magical tattooist in the southeast, a Skindancer, able to bring her amazing tats to life. When a serial killer begins stalking Atlanta’s tattooed elite, the police and the Feds seek Dakota’s help. Can she find the killer on the dark fringe of the city’s Edgeworld? Among its powerful outcasts and tortured loners, what kind of enemies and allies will she attract? Will they see her as an invader, as a seducer, as an unexpected champion … or as delicious prey?

The synopsis for this book is very deceiving. It lead me to believe that Dakota would be a typical ass-kicking Urban Fantasy heroine but nothing could be further from the truth. Don’t get me wrong, I still liked her as a character but in the grand scheme of things she’s a victim not a champion. The plot of Frost Moon is complex and well thought out. The main villain remains skillfully hidden until the very end. Anthony Francis also incorporates many so-called taboo subjects that make this book into a diverse and refreshing read.

Dakota projects an outward tough girl appearance but in reality she gets her butt handed to her on a silver plate more often than not. She really only has two things going for her: her intelligence and her skills as a magical tattoo artist. I loved Francis’ stunning descriptions. When he describes Dakota’s dragon tattoo I could almost see it flying right out of my eReader. Also, I really enjoyed the fact that the lead character is bisexual. Don’t worry, there’s next-to-no R rated action in this book other than a few kisses and lots of sexual innuendo. But, it was nice to read a story that incorporates alternative lifestyles without blowing things out of proportion.

The plot development is what made this novel an amazing read in my books. Everything follows a logical order and as readers we get to follow the bread crumbs right along with Dakota. I was impressed not only by the amount of distinct side characters but by the way they each play a crucial role somewhere along the way. When the main villain is finally revealed I was dumbfounded! All of the dots connect beautifully but I never saw what was right in front of my face until the big reveal at the end. I have to give Anthony Francis props for his story weaving skills!

There’s not much going on in the love/lust department of this book and it’s definitely more Dark Fantasy than the tamer category it was filed into. But, even though this novel didn’t contain any of the elements that I was expecting it was a surprising yet pleasant read. I adored Cinnamon! She’s this feisty, young, orphaned weretiger whom I just couldn’t get enough of. I was happy that Francis tied up the loose ends in her side story as well even though it wasn’t important to the overall book. The author’s impeccable attention to detail shines through again!

I would advise against reading this novel if you’re looking to fulfill your Urban Fantasy fix based on the synopsis. However, if you’re open-minded and are trying to broaden your fictional horizons; Frost Moon is a great choice. The ending left me thinking that Dakota might become less of a victim and more of a fighter in the next installment. Here’s hoping! Either way, the one thing that I do know for sure is that I want more Dakota Frost!