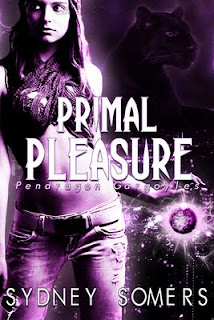 He will have his revenge—one wicked seduction at a time.

Emma is used to getting dragged into her twin sister’s magical messes, but this time her predicament is more than a minor annoyance. She’s chained to a cat shifter that her sister encased in a curse of stone. Worse, the unfortunate gargoyle’s waking up. And her sister’s not there to take the heat.

After a century suspended in stone, Cian would do anything to get his hands on the sorceress who put him there. Strangely, his dreams of revenge turn into an animal hunger to put his hands all over her—in every delightfully wicked way imaginable.

Never as talented as her sister, Emma doesn’t trust her own magic. But for now she must let Cian believe she’s the culprit in order to strike a bargain: to permanently lift the curse in exchange for his tracking skills to find her missing sister. The longer she is near him, though, the closer she comes to surrendering much more than her body to the brutal warrior.

As their attraction catches fire, Emma dreads what could happen when he learns the truth. If he will sacrifice her to break the spell…or fight for a love that goes beyond animal instinct.

This novella was a lot of fun to read and there’s tons of content for so few pages. It’s a great choice if you’re looking for a quick and enjoyable way to spend an afternoon. Primal Pleasures has engaging characters, juicy action and a fast-paced story. I’d be hard pressed to pick a favorite out of the Pendragon Gargoyles series. They’re all great, which makes the entire series a must-read.

Cian wakes up after having been locked in stone for a century. It was neat experiencing the 21st century through his eyes. Imagine finding yourself in today’s world after having been living back in the horse and buggy days in what feels like only moments ago. I couldn’t help but giggle while he struggled to understand the microwave or got addicted to Looney Tunes. He’s a very serious, manly character so seeing him fascinated by the simplest technology softened him up a bit and made Cian out to be a very likable character.

The sizzling action between Cian and Emma is intense. You’ll definitely find yourself feeling a little restless after certain chapters! This installment also expanded on Sydney Somers’ version of Fae which was well-done and a great addition to the storyline. The fourth book, Primal Seduction has been out since December and promises to be just as good!