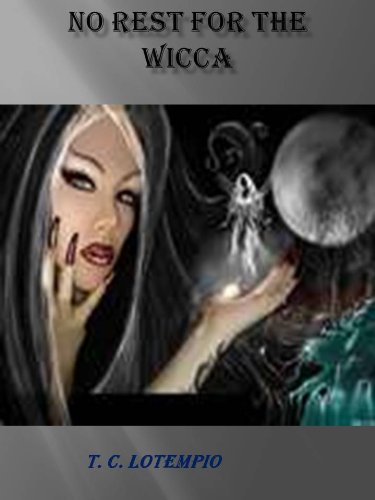 Communing with the dead is an everyday occurrence for PI Morgan Hawkes. A half-Wiccan witch who can commune with spirits of those caught between worlds, Morgan uses her talents to exorcise the trapped ghost or demon as part of the Paranormal Investigation Squad – until a string of murders with a voodoo slant prompts the Special Forces Agency to ask for her assistance. Someone’s killing pureblood witches- and the SFA’s convinced Morgan’s heritage (her father was a voodoo priest) could be instrumental in solving the mystery. Teamed with dashing SF agent Cole St. John – an Inheritor Vampire that sets her blood racing – the two of them fight their attraction for each other as they race to stop a madman from unleashing a demonic force upon the world.

At first glance No Rest for the Wicca seems like your run-of-the-mill indie book. The cover isn’t an eye catcher but the synopsis had potential in my eyes and is the main reason why I added it to my to-be-read pile. After reading the first few pages I realized that this novel was going to be “one of those”, a story that I just couldn’t put down! Lovable characters, heart-pumping action and great world-building make this book a must read.

My favorite part by far was Morgan. She’s an amazing character with a past that’s just as colorful as her present. At first, she turns down the chance to work on a special assignment that’s offered to her but when her cousin’s life is threatened she quickly reconsiders. I can’t help but admire someone who’s willing to fight tooth and nail for those they love. Morgan had locked her voodoo half away after a previous mistake on the job but forces herself to revisit it. She’s incredibly hard-headed, fiercely independent and never walks away from a fight. One of the things about her personality that made me love her even more was the fact that she doesn’t believe in being promiscuous. Too many urban fantasy heroines jump into bed within the first few chapters of a book but not Morgan. Don’t get me wrong, I love r-rated action as much as the next girl but it’s nice to come across a protagonist with strong morals with regards to sex for a change.

The storyline is equally as captivating. It’s well developed and Toni LoTempio does an excellent job of tying up all of the lose ends. Things that I’d forgotten about or disregarded as trivial came into play in the final chapters. The author’s attention to detail is admirable! The murder investigation side of the plot transformed the book into a real page turner. Just when I thought the case was solved all neat and tidy like things blow up and nothing is as it seems. LoTempio skillfully steers the investigation into a different direction, one that I didn’t see coming but ends up making perfect sense. Well played!

Cole is another great character. At first I disregarded him and thought that he was a jerk. But after he and Morgan become partners we start to see that there’s more to St. John than meets the eye. He’s a vamp but with a few added twists on the standard breed. Cole and Morgan eventually do get it on so don’t worry. Her resistance efforts were admirable but I was happy when she gave in. I know, I’m contradicting myself. I don’t like the female lead to jump into bed too easily but I still do want her to get it on… eventually!

I only touched on my favorite aspects of this book but there are plenty more. I strongly encourage you to read No Rest for the Wicca and discover your own preferred elements. Don’t be put off by the cover, this book has a lot going for it and it would be a shame for you to miss out on this jem because of a decision that’s based only on your first impression. I expected the worst from this book but instead I was surprised by the quality of the writing.

11 responses to “Review: No Rest for the Wicca by Toni LoTempio”