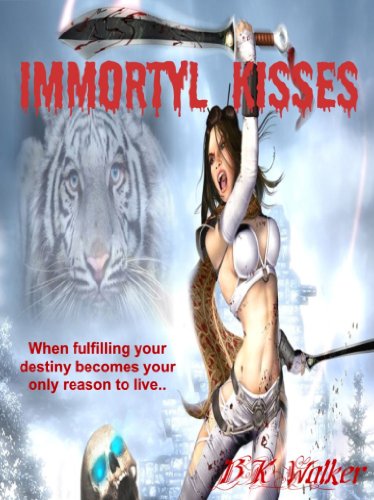 “You are a Warrior, you just don’t know it yet.” ~Jin Cao

Raine was an average girl with an average teenage life. Always loving anything to do with vampires, she never expected they would be real. When a Rogue vampire hunts her, she not only learns that vampires are real, but that the two boys that her heart is caught between are in fact a vampire and a werewolf.

As both boys vow to keep her safe, Raine learns of her true destiny…she is a Shijin Warrior born to win the war against an evil Warlock named Fala. Fala is creating half vampire half shape shifting creatures to take out all of immortal kind.

Will Raine be able to fulfill her destiny and save immortals, or will her hearts desires make her lose everything in the end?

When I agreed to read this book I expected it to deliver a Twilight-type plot and I was okay with that. After all, I liked Twilight. Immortyl Kisses does have a werewolf / vampire / human love triangle going on but that’s where the similarities between the two stories ends. I had a hard time swallowing this book. The characters are two dimensional, the story is choppy and it starts off as being Young Adult but somewhere along the way turns into Fantasy.

The three main characters are introduced very quickly with minimal background stories. After finishing the book I knew as much about BK Walker’s versions of vamps and weres as I did when I was on page 1. The structure of their supernatural societies isn’t explored, their strengths/weaknesses aren’t revealed, nothing. The only reason why I knew they weren’t human was because it’s mentioned in the book. This left me wondering why the author selected these otherworldly beings as her main characters if she didn’t want to elaborate on them. I read these types of books because I love seeing how different authors approach these supernatural beings.

I liked the beginning of the book more so than the ending. It starts off like a nice YA book with lots of potential. The pace is slow and the world building is comprehensible. Then the action kicks in and the book starts going downhill. I couldn’t get over the speed with which the characters changed their minds. Whenever they encountered a problem, instead of expressing their frustration and making attempts to overcome an obstacle they’d just do a 180 and accept their new direction without any resistance. I don’t know any teenagers that are that flexible! It felt like everything was rushed, that the characters couldn’t get through their roles fast enough for the author’s liking.

There didn’t seem to be any real direction to the storyline. Bits and pieces kept being thrown in but none of them really connected. Raine, Logan and Tristan met, fell in love, began hunting a rogue vamp, and ended up in a battle to save the immortal world. Heuh? It was just too much information at once and as a result, the transitions between story elements were choppy and sometimes down right illogical.

I tried to read this book with an open mind and forced myself to stick it out until the end but this novel did absolutely nothing for me. It was as if a bunch of snippets of short stories written about the same characters were tossed in a blender and this was the result. It was just a mess and what elements I did like were overpowered by all of the chaos. This book just wasn’t my cup of tea.