Please join me in welcoming Robyn Bachar to Rabid Reads today! Her debut novel Blood Smoke and Mirrors hit shelves on March 1st, 2011 and is also available in eBook format. It won First Place in the Paranormal Romance Category of the Tenth Annual Fire and Ice Contest. Not too shabby!
Welcome Robyn!
RR: What are some of the distinguishing characteristics of the supernaturals that you created in your book?

It was important to me to make it hard to become a vampire. I’ve never been a fan of “accidental” vampires, who were just walking to their car, got bit, and *poof* they’re undead! In my setting, to become a vampire a magician has to study necromancy, and then go through a ritual which doesn’t always work. All of my vampires worked hard for immortality…and they’re usually a bit snobby about that.

RR: The cover is gorgeous! How did you decide on the final version? Were there others that came before this one?

This was the first version, and it was love at first sight. I adore my cover. Kanaxa does gorgeous work, and I was fortunate to have her for my new release as well.

RR: Your author’s bio mentions that you’re a big gamer; what are your top 3 favorite video games of all time?

Of all time? That’s a tough choice. Right now I’d have to say Dark Age of Camelot, EverQuest, and Dragon Age. I also play World of Warcraft on a regular basis. 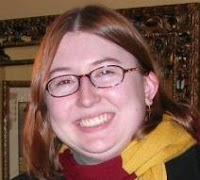 RR: Where did you get your inspiration for Cat, the main character of your book?

Cat has a lot of my sense of humor, but thankfully I have the good sense to keep my internal monologue to myself. Usually. I wanted to have a down-to-earth heroine who balances her supernatural abilities with an average, everyday life. She’s a witch, but she’s also a waitress. She has faerie blood, but she’s also trying to quit smoking and lose weight. Magic makes her life more difficult, and she struggles to deal with it.

RR: In 5 words or less, why should we read your book?

RR: What can we expect on the romance front in your book?

As the warning says, there’s explicit blood drinking and magician sex, but there’s far more fight scenes than love scenes in the book. Cat and Lex have a long way to go in the book to work out their problems, because she has major betrayal issues from their ugly breakup. I’m not sure what number I’d give it. Maybe a 7.

RR: Which secondary character was the funnest to write and why?

I’m not sure I’d define him as a secondary character, but Zachary Harrison is my favorite character to write. He’s ridiculously fun, because he’s a very bad boy. Though he would argue that he has sound, sensible motives, instead of evil villain ones. I think the bad boys always have more fun, because they’re not concerned about being good.

RR: What was your favorite part in this whole process?

Writing. I’m not a fan of editing, and I’m still figuring out the whole promotion thing, but I’m always happiest when I’m writing. I love telling stories and creating new worlds for my characters to play in.

RR: If you could go back and change anything, would you and if so what?

I’m pretty happy with the way that the book turned out, so I don’t think I would change anything. It’s still strange to me to see my book sitting on my coffee table, with my name on the cover, and to open it and read words that I wrote.

RR: Can we expect to see more of Cat in the future?

I hope so. I’ve been working on more stories in the setting, and my May release, The Importance of Being Emily, features three characters who appear in Blood, Smoke and Mirrors.

RR: What are you working on right now?

I have a few different stories in progress at the moment, and Emily’s story releases on May 24th. I’m very excited about her story, because I really enjoyed writing it. It’s a quick, fun read.

RR: What supernatural being would to choose to become if you were offered the choice? Why?

I’d probably want to be a vampire. My wardrobe’s already mostly black and I burn in the sunlight—bright red, not up in smoke.

Robyn, thanks for the interview!
Robyn is giving away a $20 Amazon GC to one randomly selected commenter on her tour hosted by Goddess Fish Productions. See other stops here and her blog for details.

Even a bad witch deserves a second chance.

Wrongly accused of using her magic to harm, the closest Catherine Baker comes to helping others is serving their coffee. Life as an outcast is nothing new, thanks to her father’s reputation, but the injustice stings. Especially since the man she loved turned her in.

Now the man has the gall to show up and suggest she become the next Titania? She’d rather wipe that charming grin off his face with a pot of hot java to the groin.

Alexander Duquesne has never faltered in his duties as a guardian—until now. The lingering guilt over Cat’s exile and the recent death of his best friend have shaken his dedication. With the murder of the old Titania, the faerie realm teeters on the brink of chaos. His new orders: keep Cat alive at all costs.

Hunted by a powerful stranger intent on drawing her into an evil web, Cat reluctantly accepts Lex’s protection and the resurrected desire that comes along with it. Lex faces the fight of his life to keep her safe…and win her back. If they both survive.

Leave a comment with your e-mail + RT for more chances to win!
“#Interview with Robyn Bachar @rabidreads http://goo.gl/fb/16Ewa #guestpost”