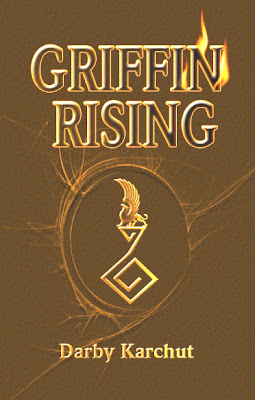 For centuries, rumors have abounded of a lowly caste of supernatural beings known as the Terrae Angeli. Armed with the power to control Earth, Fire, Wind and Water, these warriors secretly serve as guardians for mortals in danger.

But for one young angel-in-training, Griffin, life is hell as a cruel master makes his apprenticeship a nightmare. On the verge of failing, a new mentor, Basil, enters his life and changes it forever. It is their father-and-son relationship, sometimes turbulent, often hilarious, always affectionate, that sings through the story like a pure note.

Masquerading as the average teen next door, Griffin struggles to learn his trade, navigate the ups and downs of modern life among humans (including falling in love with the girl next door), and prepare for the ancient trial-by-combat every apprentice must pass at sixteen or be forced to become mortal.

Griffin Rising is a great coming of age novel full of life lessons that are cleverly disguised as an angel adventure story. I connected with each character on a deeper level because of their journals entries which were fun yet insightful. I really enjoyed the contrasts between Griffin’s struggles as a teenager and as an angel’s apprentice. At times, Fin would demonstrate a level of maturity that was well beyond his years while as others it was clearly evident that he is still just a kid. Darby Karchut hit a home-run on her first try as an author in this genre!

The relationship between Griffin and his mentor, Basil, is what stood out the most in my eyes. Fin’s first mentor is the perfect example of every foster child’s worst nightmare. Nicopolis is not only mentally and physically abusive but he’s also rooting for his apprentice to fail. Needless to say, it’s not a healthy environment to grow up in. Then Basil enters Griffin’s life and everything changes for the better. It takes a while for Fin to fully trust and open up to his new mentor. No surprise there but it’s the young angel’s transformation at Basil’s hands that made this book really stand out for me. I also liked the fact that Griffin ends up having a loving father figure in his life. Too many Young Adult novels paint the parents in a bad light. It was nice to be reminded that there are good ones out there and what a difference being raised in a loving household can make.

I loved reading the journal entries of the different characters. They allowed me to get into their minds and to truly know them. Basil and Griffin both keep journals and it was interesting to see how their points of view differed on the same topics. Every problem had a teenage and adult perspective. As a result, I understood both sides of an argument better. It reminded me of my teenage years and of how convinced I was that I was right and that my parents were wrong. Now I know better (Just don’t tell them I said that)! I also really enjoyed the teenage wit. Griffin may be a guardian angel to-be but he’s still a smarty pants!

The ending was bittersweet for me. At first, the chain of events left me jumping with joy but that moment was fleeting. Everything came crashing down and I was left with a monster of a cliff hanger. Darby Karchut not only wrote a killer debut novel but she also made her readers a promise of more greatness to come. I’ve already added Griffin’s Fire to my to-be-read list! This book has something for everyone regardless of your age. The angel mythology is well done, the teen angst is adeptly portrayed and there’s even a bit of young love. I adored Griffin Rising and can’t wait for the next installment!

“Look, Fin. I understand what you’re going through. Truly, I do. But we have mortals depending on us, so I need you to angel up.”
– page 129